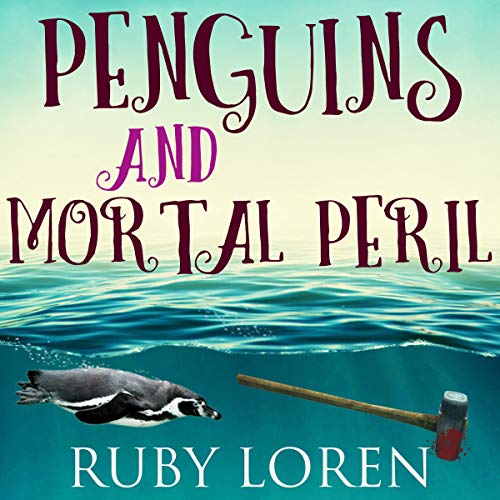 By: Ruby Loren
Narrated by: Rebecca Reed
Try for £0.00

Finding a body in the penguin pool isn't a great way to start the day.

It’s even worse when you realise you're now in charge of looking after the penguins.

Because their keeper is the one at the bottom of the pool.

Zookeeper, Madigan Amos, is just as curious as anyone about the strange circumstances surrounding the penguin keeper’s death. But after apprehending armed intruders, getting caught in the middle of a deadly attack, and sparring with a machete wielding murderer, she starts to wonder if she should have kept her curiosity to herself.

Unfortunately, there’s no getting out now.

Someone at the zoo has a hidden agenda.

And they’re willing to kill to keep it a secret.

Pick up this mystery today and you’ll be up all night listening to find out "whodunnit"!

What listeners say about Penguins and Mortal Peril

A traditional cosy in a not so traditional setting, 'Penguins and Mortal Peril' is a fantastic read.

With well constructed and funny characters and an intriguing and well-carried plot, this book is truly a delight. I simply couldn't stop listening: so many details of the lives of those who keep a little zoo working, so many interesting and funny characters!

Madigan is a great character: smart, caring, dedicated, and I'd love to spend time with her. This is a delightful story, ideal for those who love animals ♥

Rebecca Reed does a really good job narrating the story.

enjoyed it very much with a gratifying ending
enjoyed the reader's accent. thankyou wish this series were on the nook

Penguins and Mortal Peril Madigan Amos Zoo Mysteries, Book 1, my third read from author Ruby Loren. A short, enjoyable, well-written mystery with likable characters. Fun read. Since I own both the Kindle & Audible editions I was able to read along while listening. Narrator Rebecca Reed’s narration added to the book’s enjoyment. I was given an Audible copy of this book & am voluntarily reviewing it. (RIP Marley January 20, 2014 - July 24, 2018).

Light on the mystery

Penguins is the first in the series so I can understand the author taking a lot of page space fleshing out characters and the setting. However, I can only give the story portion an OK rating because there is a death right at the beginning of the story and nothing happens dealing with it until roughly (this was audio and I didn't think to look at the time) 60% where it picks up again. I liked and enjoyed hearing about the zoo and Madigan's life, but as a mystery lover, I wanted more development of and dealing with the mystery.

The blurb didn't mention anything about England so I was quite surprised when Rebecca started her performance. I really thought she did a good job given the number of voices and she was very pleasant to listen to. Would definitely be interested in listening to other books she's narrated.

I received a code for the audio book from the author in exchange for my honest review.

I found this audiobook to be very good. It has a great combination of mystery, murder, and suspense. The narrator does a wonderful job of bringing each character out.

Engaging. Entertaining. Fun! I am an eager fan of Ruby Loren’s Madigan Amos Zoo Mystery series: Animal rights activists? Penguin keeper dead? A menagerie of suspects? Zoo’s can be dangerous, but deadly, too? Madigan ‘Madi’ Amos is dedicated to the care of the animals at the Avery Zoo, but when she finds Aquatics Keeper Ray Meyers bludgeoned at the bottom of the penguin pool, murder was the last thing on her mind. The mystery and mayhem to follow is delightful…all ‘cozy’ addicts will be thrilled with several twists and turns to keep any amateur “Sherlock” on their toes, humor to cut through the murder, and a bit of romance thrown in to warm one’s heart. Ruby’s characters are well developed even this early in the series—a testament to Loren’s writing skill, with Madi written in first-person which by nature puts me right in the middle of the story. Playing the background we enjoy learning about the ins and outs of zoo life through Madi’s zoo writings about the various animals to which we are introduced. This is unique, but delightful; I’ve not read a ‘cozy’ zoo-themed book. Don't miss this!

I have subsequently become an eager fan of this series and enjoyed revisiting Ruby Loren's "Penguins and Mortal Peril" with this newly released audio version. I am so partial to a British accent, often saying murder "sounds" better with a British accent, and Rebecca Reed's delightful narration is brilliantly entertaining. She goes well beyond the traditional reading aloud format using a variety of British dialects to illustrate a plethora of character personalities along with the tone and emotions to keep me engaged. The one challenge female narrators have is doing justice to male voices, and Rebecca met and exceeded that challenge. Don't miss this gem!

Somethings up at Avery Zoo, and Zookeeper Madigan Amos is right in the middle of the danger! Madison loves her job since she had loved animals from childhood. She trained as a zookeeper and was fortunate to get the job with the Avery Zoo. Despite the long hours and hard work, she took on the animals the other zookeepers didn’t want and intuitively knew when her animals were not happy and how to fix that. As a result, many of the animals that didn’t breed well in captivity were producing offspring! Today, Ray Myers was late to work and she was asked to feed the penguins. She found the gate unlocked and Ray’s tools and, at the bottom of the pool, she spotted Ray!

It was a long day for Madison since no one thought to take care of her animals while she was questioned by the police. She wondered about the ‘animal rights crazies’, a rag tag group of protesters, currently camped outside the zoo entrance. Could they have harmed Ray? One of her co-workers mentioned them too, then told her there was rumor of another bunch of more extreme activists who were known to take matters into their own hands.

While checking on the feral cats the zoo allowed to stay for their rat-catching abilities, Madi heard footsteps that seemed a bit furtive. It was getting dark and thoughts of Ray being killed after hours made her cautious as she pressed against the wall to stay out of sight. The man who walked by was Lowell, a new builder working on the animal enclosure in her area. Builders never stayed after hours since it would cost extra money. Why was he wandering around this area? The next day, after concluding her lecture to the public on zoo animals, she saw Lowell walk by yet again. Why was he not working on the enclosure right now? Why was she still suspicious of him? She began to follow him but lost sight of him until, walking into the bat enclosure, she heard voices -- then Lowell and Mr. Avery, owner of the zoo, walked out! What was Mr. Avery talking to the new builder about, especially with their voices lowered? Things were getting very strange indeed! Could the elderly zoo owner be plotting something with the strange newly-hired builder? Is Madi putting herself in danger by following her sharp instincts and being too curious?

This is a steadily moving story line with interesting and well-defined characters. In the audiobook version, the narrator did a very good job with the voices and inflection. It really brings the story alive for the listener. The author keeps the story intriguing by giving us possible suspects, but no certainty of their guilt. So the reader follows Madi’s actions as she tries to find the killer with the hidden agenda -- before he turns on her or others! Grab your book or listen to this excellent mystery and you’ll be hooked on this series! [Note: The narrator makes a number of small changes throughout the script, all of which make it even better for the reading while staying true to the story line. Very well done!]

I read the book but when I got a chance to hear it on audio could not pass it up. Rebecca Reed did a wonderful job as the narrator. Ruby Loren writes cozy that is so much fun to read. Listen to this book was like visiting an old friend. It a great cozy pick up the book or the audio maybe even both you will be glad you did.

Saturday did not start out well for Madi, keeper at the Avery Zoo. The
regular keeper for the penguins was late, so those duties were temporarily
added to hers. Until she found his body in the penguin pool. And that's
just the beginning of this well crafted mystery puzzle full of twists,
turns, and too many suspects for Madi to be sure of, including a protest
group who have been causing trouble for a while now. There are more
incidents, interpersonnel conflicts, and a real surprise ending. Don't
miss this one!
Rebecca Reed is excellent!

Zookeeper, Madigan Amos is starting her day on a lowish note..one of the other zookeepers hasn't arrived at work so his work is given to Madigan, aka Maddi. When she arrives at the penguin enclosure, she finds the body of the zookeeper along with something lying near him in the water. From this point on Maddie knows something is off about the zoo. Her instincts with all the animals have never been wrong so she knows this particular instinct is true too. Now it's up to her to decide what to do.
A fascinating tale of murder and animals that will get you thinking.
Rebecca Reed is a fascinating narrator. Her different vocals for the characters seem to hit the true essence of these people.
Fantastic audio, narrator and story!!!