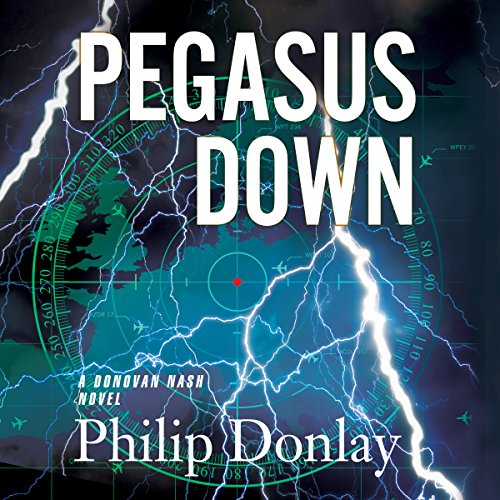 By: Philip Donlay
Narrated by: Randall R. Rocke
Try for £0.00

A CIA-operated jet on a clandestine mission disappears in Eastern Europe. No mayday, no wreckage, and no known survivors. No way to know if the top-secret extraction of a key American scientist from Slovakia, or his liberator, Dr. Lauren McKenna, code name Pegasus, are dead or alive.

Donovan Nash's precarious world is rocked when word reaches him that his wife, Lauren, is missing in Eastern Europe. Using his millions, and fueled by the fear of losing his wife, Donovan and company cut a swath through Austria and Hungary. Desperate, Donovan leverages his lifelong secret to enlist an unlikely ally - one of his oldest friends - who may very well want him dead. As Donovan closes in on the truth, another, and more deadly, reality is revealed. A ruthless terrorist group has acquired a stealth aircraft with the ability to deliver a nuclear device. They are poised to strike - but where? What started as a rescue turns into a full-throttle aerial chase. Will Donovan be able to rescue his wife, as well as prevent a nuclear catastrophe?

What listeners say about Pegasus Down

Donavan Nash series has been great.

It’s sad though that the narrators are awful. This one reads as though it’s a run on sentence. For example: “Donavan what is the situation we are going down and fast no one jump out of the helicopter until I say so it’s going to be close and we want to survive” there were two people talking and you couldn’t tell where one stopped and the other began. His mostly monotone reading was annoying. Because I was able to focus on the content of the story and kind of figure out after the fact who was speaking, I got through the book. I had to rewind several times to figure out what was going on. When accents were used, EVERYONE often had an accent, even Donavan and Lauren.

The story was action packed, a great continuation of a Phillip Donley work. I just wish they chose better narrators. The first book, Category Five had the best so far. It made, in my opinion, the best book because of it. It’s the reason I continued the series in the first place.

This is by far the worst narrator I've ever heard. I've listed to all the others in this series but if Randall Rocket ever narrates another one, I'll skip it.

Although the story was wonderful, the narration was poor. It sounded like a computer and very rushed.

Somebody put me out of my misery!

I like the characters and story. I’ve been reading Donlay books in order. I’m a bit OCD, so I can’t just quit the book until it’s finished...but the narration is extremely painful with it’s old radio series style. I’ve increased the speed to reduce my time with this ever so succinct, radio days, diction.

The author has written a brilliant novel!

The author has written a fantastic novel, full of intrigue and suspense! The narration is monotone but still not to bad.