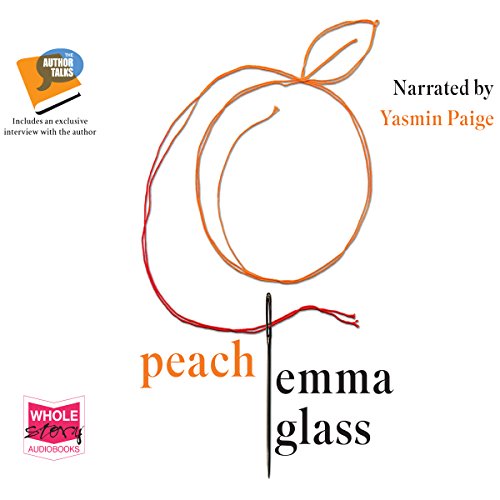 By: Emma Glass
Narrated by: Yasmin Paige
Try for £0.00

Something has happened to Peach. Blood runs down her legs, and the scent of charred meat lingers on her flesh. It hurts to walk, but she staggers home to parents that don't seem to notice.

Peach must patch herself up alone so she can go to college and see her boyfriend, Green. But sleeping is hard, working is hard, and eating is impossible when her stomach is swollen tight as a drum.

"An immensely talented young writer.... A strange and original work of art that manages to be both genuinely terrifying and undeniably joyful." (George Saunders, award-winning, Man Booker-nominated author of Lincoln in the Bardo)
"Impossible to categorise, intimately weird and exhilaratingly bold...Emma Glass's massive talent is all her own." (Laline Paull, author of The Bees)

What listeners say about Peach

This is a debut novel by author Emma Glass and she has produced something extraordinary. Her writing is confident and bridges any gap between prose and poetry, with emotion portrayed often through alliteration and repetition of key phrases.

The story follows Peach, who has been brutally battered and left bruised one night, though it is never clear what has happened. Her thoughts meander over the incident and the consequences in which at one point she believes she may be pregnant.

The remainder of the book paints a graphic picture of the effect the trauma has had on Peach and how this is expressed by her in changes to her body shape, and in her perception of the ordinary things of life.

There are mythical and superstitious elements to Peach's damaged psyche, which you will need to experience yourself. I must admit that some of it escaped me, but this thin volume has such power and leaves the reader in no doubt of Peach's pain and the ultimate consequences.

It is quite unlike anything I have read before, and whilst I cannot claim to have fully understood it, it definitely is unique. Unfortunately it is an acquired taste so not everyone will appreciate the style.

As I am getting into audiobooks, I decided to download the audio version of Peach by Emma Glass, as it was one that I had wanted to read since it came out but hadn’t had the chance to get a copy. Plus it was less than five pounds. And boy am I glad I didn’t get this at full price or in a physical format. While interesting, this book is disturbing and unnerving, definitely not one to read during your lunch hour or immediately after any food for that matter. As an audiobook, I feel that I got the full intentions of the narrative, which is why I will say that it was a decent listen. However, it is a very short book with triggering content and a lot of graphic food-related imagery.

The Story
Peach has been assaulted in some way and it’s hinted that the assault was sexual. The book deals with the aftermath of the assault as Peach sees it. She sees her parents’ refusal too see the bad, her boyfriend’s odd contentedness despite knowing something is wrong and her friends’ and neighbours’ odd behaviours as well. Of course, most of it is supposed to be in her head. The story is supposed to reflect how Peach would see things following an assault like that. How she would be paranoid at even familiar people looking at her, not trusting of anyone, including herself and seeing every character as a kind of food, I believe represents a coping mechanism. Peach grows continually throughout the novel, which represents her need to tell somebody and get closure.

My thoughts…
Peach by Emma Glass is a very strange, triggering and unnerving novella. While I personally found it a little sickening, I think lots of people would enjoy this, but it is certainly not for everyone. Peach is a victim who is trapped in her own mind, and as a reader, I seriously wanted her to get out of her head for a while by talking about what happened to her. She is a sympathetic character, but the way that she is narrating her world can make readers uncomfortable.
I quite enjoyed the way that Peach turns people into various foods and colours/objects. She does this in a way that makes sense, with the baby being jelly with icing sugar on top, her boyfriend being green which is a calming colour representing nature, and her attacker being sausages (Lincoln), which are fat and greasy and altogether gross. This way of explaining the characters in her life is something I found appealing about the book, as it made me consider who was what in my life and how I would de-personify them.
What I didn’t like about this book was the grotesque imagery, especially with the immediate aftermath of her assault, the oddly sexual scenes between Peach’s parents, the way she treats the baby in certain parts and the suggested cannibalism at the end. This part bewildered me, as the everyone wants her to eat the sausages, which is difficult for Peach because she is vegetarian, but this bit becomes a bit too hyper-realistic as I noticed that all of her emotions become giddy and excitable, which continues the unnerving feeling of the novel.

Overall, I would recommend this book to people who enjoy things that are abstract, vague and suggested. If you enjoy reading into the meanings of the use of words – in this case food and colour – then you will enjoy this, as it offers all of those kinds of activities. I am issuing a trigger warning, as Peach is quite a disturbing book and would not recommend the audio book to anybody who doesn’t like the sound of certain words, like ‘slurp’, ‘slip’, ‘belch’, etc. as the narrator does an excellent job of making these words sound creepy and weird throughout.

I did really enjoy this, if enjoy is the right word. It’s brutal but lyrical and compelling. It’s also highly surreal, the author in I interview has played down the use of metaphor in the book, urging readers to consider it more literally, however it’s difficult to not superimpose the imagery on to real people and events. Ultimately this is why I’ve given 4 stars and not 5, I couldn’t consolidate the ending in my mind and it left me a bit unsatisfied. However it’s an unusual and beautifully written novella, the narration is excellent.

even though this book made me want to throw up most of the time while listening to it, it was beautifully written, stunning description, and haunting at the best of times.
It's a nice, short read and definately a book that everyone should read at least once.

not a book - an experience

See my review of Peach on Amazon. It was way too long to do from a phone.