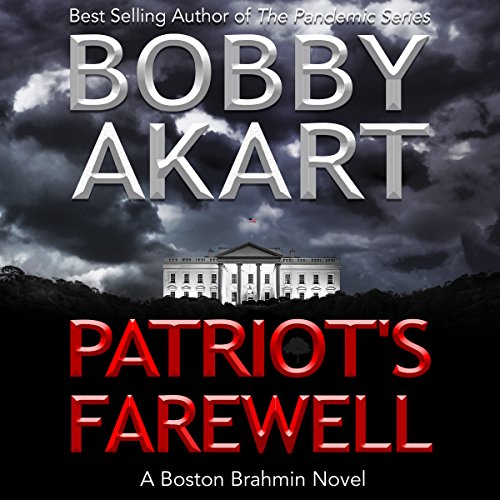 By: Bobby Akart
Narrated by: Joseph Morton
Try for £0.00

"In politics, nothing happens by accident. If it happens, you can bet it was planned that way." - FDR

After a devastating cyber attack brought America to its knees, a reluctant hero emerged. A humble professor whose lineage dated back to the American Revolution.

Responding to the battle cry, "Choose freedom," patriotic Americans rallied around their new president, Henry Winthrop Sargent IV, "Sarge" to his friends. As his administration worked to rebuild the nation, Sarge called upon his closest friends, the Loyal Nine, to use their skills and resources to assist him.

The nation, except for four states which seceded after the collapse, stood behind Sarge and his administration during his first term, which focused on rebuilding the country. But as his second term in office comes to an end, the nation is still divided, and the drumbeats of war can be heard from the other side of the world.

The Boston Brahmin, a shadowy group of wealthy and politically connected financiers whose roots date back to the Sons of Liberty, still look to Sarge as their leader, but storm clouds are brewing, and Sarge will find himself in the crosshairs of a power struggle.

Can Sarge bring a divided nation together before he leaves office? Can a rebuilding military face off against a major superpower? Will Sarge survive a betrayal from within the Boston Brahmin?

Author's note: Patriot's Farewell does not contain strong language. It is intended to entertain and inform audiences of all ages, including teen and young adults.

What listeners say about Patriot's Farewell

I truly enjoyed listening to the complete series. I found myself pulling for all of the characters. Especially Sergeant. That said, I found it difficult to stop listening and immediately started the next book. I have listened to all of Bobby's series and highly recommend them to everyone. B. Rayl

The whole series was worth listening to. Good overall story with many of the same characters in each book of the series, carrying over in the different stories/books. Performance is well done with many characters involved.

This is a very well written series. I have listened to this more than two times. Each time picking up on more information than the last.
The mixture of American history and current political climate make for a very Interesting story.
I highly recommend this series as well as Mr. Akart’s other books

The Boston Brahmin series is spellbinding and held my rapt attention from start to finish. This last book in the series was a very satisfying conclusion to a great story. I feel I really got to know the characters, their moods and their motivations. I am totally committed to the motto, “Choose Freedom”!

This is a MUST read!

The Boston Brahmin series was one of my FAVORITES, but I hadn't read this one until now. It was amazing, as always. Bobby's books make me feel like I am there and I really want these kinds of great people in my life!! He is one of my favorite story tellers

Great look at the rebuilding after the collapse

I’m so happy Bobby Akart decided to write this book, which gives us a look at the rebuilding of America after the collapse. Most post-apocalyptic books stop before this point, so it was a unique and enjoyable way to end the series. Although focused on this aspect, there, of course, were struggles and obstacles in the sub-plots. While Sarge continues as the main protagonist, we also get to see where the future brought those in the Boston Brahmin and Loyal Nine. Joseph Morton continues his excellent narration in this book, bringing us into the pages and giving us a more emotional experience. This is a must read (listen) series for all who enjoy fiction, historical fiction, and post-apocalyptic fiction.

I like Akart’s books and have read/listened to a lot of them. This one was not my favorite. As for the story I found the ending abrupt and lacking. What really bothers me is that this book incorporates too much of the author’s political divisiveness. Why not just fictionalize the story as opposed to alluding Trump’s divisive politics and the premise that America is a Christian nation. I find this alienating and a turn off. It also flies in the face of what he has built his characters like Sarge to be so I find it hypocritical. I really have to consider whether I want to continue reading this author’s fiction books.

I enjoyed this latest book to the series. The writer has made the characters so endearing. Also, the history that the write inputs into the story line has made me look into our wonderful history of our founding fathers.