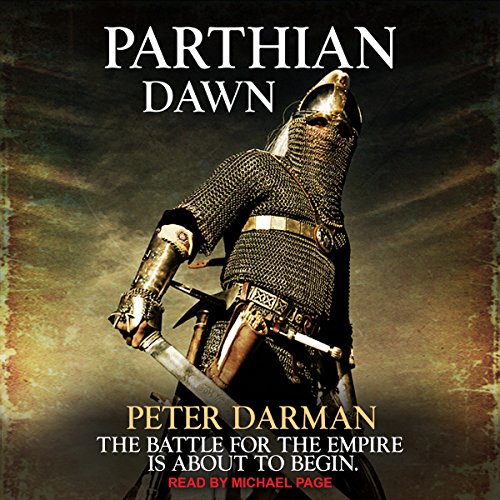 By: Peter Darman
Narrated by: Michael Page
Try for £0.00

Parthian Dawn is the second book of the adventures of Pacorus the Parthian and his companions - the fierce and proud Gallia, the ex-Roman centurion Domitus, the scout Byrd and the sorceress Dobbai - as they battle for their lives against the backdrop of the clash between the ancient world's two greatest empires.

After three years fighting by the side of Spartacus, Pacorus and his followers have escaped from Italy in the aftermath of the defeat of the slave rebellion. Made a king by the ruler of the Parthian Empire on his return, he has married his beloved Gallia and made the city of Dura Europos on the banks of the Euphrates his home.

But his new kingdom is seething with discontent and surrounded by hostile desert nomads who are the sworn enemies of the Parthians. The aged King of Kings, the man who has united the Parthians for decades, then dies to cast a shadow of uncertainty over the empire, which erupts into full-scale civil war as one of the empire's most powerful men, Narses, attempts to seize the high crown by force.

Pacorus is forced to fight both Narses and his scheming ally, Prince Mithridates, to preserve the realm and his own crown. And then the Romans, taking advantage of Parthia's internal troubles, launch their own invasion of the empire.

What listeners say about Parthian Dawn

outstanding story, great background description of age, characters intertwined from slaves citizens nobles consuls and kings, of ambition jealousy strife and love , I feel all the emotions whilst listening so engrossed in this brilliant series

Great narration and interesting characters who keep you listening as was his first book. Recommended.

Parthian Dawn started well enough, but started getting tedious about mid-way through, so much so that I just wanted it to get over already. The first book in this series was much more interesting and entertaining. The plot lines in this second in the series became threadbare and the characters started becoming ever more one dimensional. Also the mythic proportions of Pacorus, Gallia and Domitus began to wear on me. When I learned that there are 10 more in this Parthian Chronicles series, I was dumbfounded. I can't imagine trying to stretch this already thinking story into 12 books. Were I to Wade through 12 of these, I would be rightfully referred to as a glutton for punishment, a literary masochist. Since I am anything but, my journey with this author ends here and now. For those who want to continue with the slog, good luck.
I should add that the narration was decent, although women's voices could use some work.
By the way, I read and listen to a lot of historical fiction, so this opinion has a solid base for comparison.