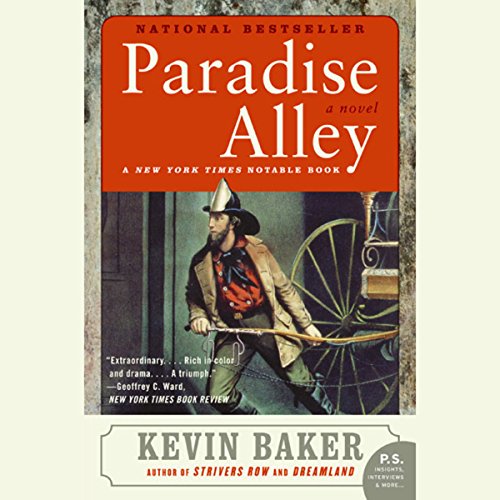 They came by boat from a starving land, and by the Underground Railroad from Southern chains, seeking refuge in a crowded, filthy corner of hell at the bottom of a great metropolis. But in the terrible July of 1863, the poor and desperate of Paradise Alley would face a new catastrophe, as flames from the war that was tearing America in two reached out to set their city on fire.
©2003 Kevin Baker (P)2003 HarperCollins Publishers, Inc.

A superb book, packed with historical details. gruelling by absorbing. Excellent narration from the author.

This book captures a series of events during the Civil War that I believe the authors of textbooks have deliberately chosen to ignore--the draft riots in New York. The novel, well narrated by its author, captures the cruel frenzy of mob psychology as bands of toughs, and otherwise regular citizens, go on a seemingly unending destruction of the city and particularly the lynching and humiliation of its African-American residents. Yet amid this evil chaos, the novel contains carefully crafted stories of human love and survival. First person narratives are interspersed to create a plot that is engaging and poignant--a job well done!

This time the author should not be the reader

This book was okay: started slow, got much more exciting, and ended leaving some storylines dangling, although it summarized the period philisophically. The historical detail was captivating and the characters were complex; as the tale moved along, I changed my views about two of the characters (Robinson- went from liking him to hating him and Dangerous Johnny Dolan - went from hating him to pity). The author was the narrator, and he dragged the story down, in my opinion. Sometimes the story seemed a little wordy; it was much better when there was some action, or when it was focused on what had happened back in Ireland during The Hunger.

I gave two stars because I can't really rate the book. I will say that authors that try to narrate their own stories are delusional, stupid, and probably very cheap. The narration in this book is not good and the story seems to have no direction or too many. I like first person stories that are more like I did this or we did that. Might be fine for others but not me.

This book is gratuitously and unrelentingly violent. I was glad when it was over. My compulsion to finish books that I start, coupled with that sort of morbid fascination that compels one to look at a car crash were the only reasons I can think of as to why I didn't put it down. Why this book made the cover of the NYT Book Review several years ago escapes me.

What disappointed you about Paradise Alley?

This book was difficult to follow, and the story was uninteresting. The title of each chapter was a character's name and it was difficult to follow. Many times the text was written in first person and it was hard to remember who the book was talking about. The narrator of the book attempted to have an Irish accent but this fell very short. The content of the story was uninteresting and did not draw the reader to the characters or their plight.

Either the Scottish Prisoner or Ink Spell

Would you be willing to try another one of Kevin Baker???s performances?

Not at this point. The book was so difficult and the narration so poor that I'd avoid his books and performances. The only way I would reconsider is if the book was compelling from the beginning.

I would advise other readers to not purchase this book, it was a waste of my time.

This book was one of the best books I've ever read. I've purchased three copies of it to give away, and have since downloaded the authors other books, I've just finished "Dreamland" and it was as good as this one. I wasn't sure when I joined Audible that I'd be able to "listen" to a book, but Paradise Alley is the perfect book for this, the story pulls you in and you won't want to stop listening!

I have been an audible listener for 3 years and have never been so disappointed in a book than this one. The story was difficult to follow and details given to aspects that did not affect the story.