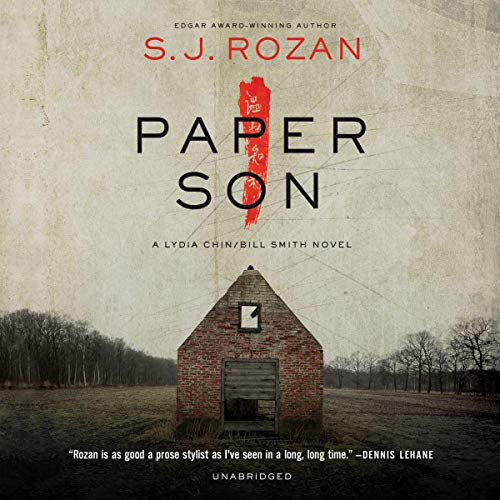 The latest Lydia Chin/Bill Smith mystery takes the acclaimed detective duo into the Deep South to investigate a murder within the Chinese community.

The Most Southern Place on Earth: That's what they call the Mississippi Delta. It's not a place Lydia Chin, an American-born Chinese private detective from Chinatown, New York City, ever thought she'd have reason to go. But when her mother tells her a cousin Lydia didn't know she had is in jail in Clarksdale, Mississippi - and that Lydia has to rush down south and get him out - Lydia finds herself rolling down Highway 61 with Bill Smith, her partner, behind the wheel.

From the river levees to the refinement of Oxford, from old cotton gins to new computer scams, Lydia soon finds that nothing in Mississippi is as she expected it to be, including her cousin's legal troubles - or possibly even his innocence. Can she uncover the truth in a place more foreign to her than any she's ever seen?

What listeners say about Paper Son

This has to be the worst southern draw/accent narration I have ever heard. I grew up in the Mississippi Delta in Greenville. I could not bear listening to this...returned the book.

Couldn’t finish this one

I have enjoyed other books in this series, but this one is set in Mississippi, and it seemed like the author has never been south of lower Manhattan. Cliche southern characters, complete with the ignorant cop, locals who don’t know how to speak grammatically, and truly awful “Southern” dialogue. (“Sit down cousin Lydia”; “apologies, cousin Lydia”; “everybody already skedaddled”, “well, you big city detectives- what do we do now?” Skip this one.

Another Well-Crafted Mystery with Top-Notch Narration

The always dependable S. J. Rozan never fails to satisfy. Once again the redoubtable Lydia Chin and her loyal partner, Bill Smith take us on a journey that is by turns cultural, historical, and a fine mystery to boot.

Emily Woo Zeller is nimble and credible and is an especially comforting narrator when voicing Lydia.

Come for the mystery, stay for the history and the emotionally satisfying coda.

Love SJ Roman but this book not up to snuff

Narrator is terrible. Story is overwrought and heavy handed with outdated message. Not her best and maybe worst.

Well worth the wait!

It's been a while since the last book in the series was written, and I had no idea what to expect. The story succeeded on many levels, including providing a fascinating (albeit shameful) backdrop to the events going on, to creating a tapestry of rich characters and unexpected twists and turns. An excellent read/listen!

Just couldn’t get into it

I really wanted to like this story but it just never got me excited. It didn’t keep my attention and I’d have to rewind to re-listen to parts... maybe I’m just too used to faster paced books

I’ve been joyed this series. However I must say this was my favorite book of the series. I like that there was a romance in the back always brewing but never coming to boil.

Terrific book! Wonderful characters, riveting story, and a piece of history I, for one, knew nothing about. Lydia Chin is one of the great fictional Private Investigators. Emily Woo Zeller is an amazing reader and actress—she manages to create a distinct accent and timbre for each character so that you can instantly tell who is speaking no matter the number of characters in a scene. This is my first Audible book and what a great way to start!