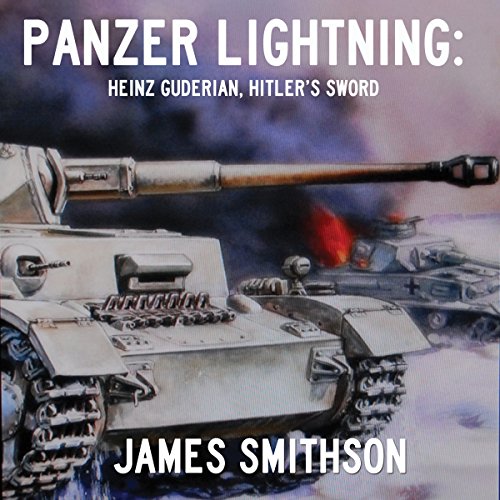 By: James Smithson
Narrated by: Daniel F Purcell
Try for £0.00

An in-depth look at one of World War II's most notorious military leaders. In 1941, Guderian commanded Panzergruppe Guderian in Operation Barbarossa in Russia, where he received the Knight's Cross with Oak Leaves. His army conquered Smolensk in a short time, and turned south to threaten Kiev, but he was relieved of command on 25 Dec 1941 for disobeying an order from Hitler. On 1 Mar 1943, he was appointed inspector-general of the Armored Troops, then on 21 Jul 1944 the chief of staff of the army. He was dismissed by Hitler on 28 Mar 1945 after an argument, ending his involvement in WW II. Guderian surrendered himself to the Americans on 10 May 1945. Although he remained a prisoner until 1948, he was not tried for war crimes, though the Polish government protested. At the Battle of Wizna, Guderian threatened to execute Polish POWs if the Polish commander did not surrender; since none were actually executed, the incident was dismissed as a bluff employed by Guderian.

First Book I could not listen to, to the end

The book is horribly disorganized. The “first person” narrative becomes annoying very quickly. The book is a missed opportunity to chronologically detail Guderian’s involvement in the war.

Sadly, the book is made much worse by one of the least competent narrators I have ever listened to. Mr. Purcell might wish to not try and keep 2 marbles in his mouth while narrating the next book, if there ever is one. Mispronunciations, belaboured pronunciations of place names, and people’s names, and a lilt most unbecoming to Guderian and his undoubtedly strong personality.

So, with more than 4 hours to go, I am done being irritated.

Is the dialogue used as a first person based on diaries or has the author taken license? Great listen except for the origin of the narrative.