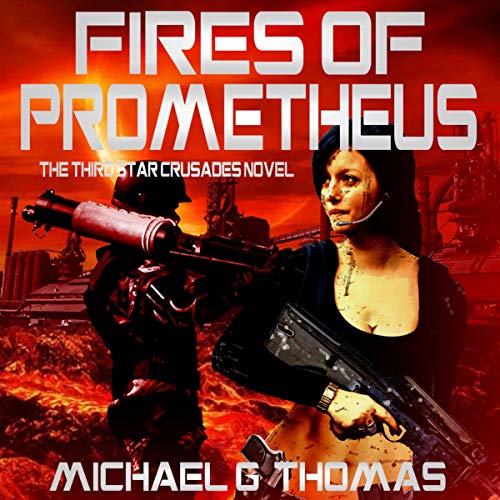 Fires of Prometheus is the third book in the epic science fiction series that chronicles humanity’s first interstellar confederation, torn apart by religious strife and extremism.

In this latest book of the Star Crusades Uprising series, the sector is entering a short period of calm. There is peace in Proxima Centauri but for how long? The religious insurgency has already exploded throughout the system and one by one the colonies have seceded from the Confederacy, lured to the offerings of the Church of Echidna. Spartan and General Rivers have vanished and are presumed to have been executed at the hands of their Zealot captors for the murder of the President of Kerberos.

Licking the wounds from multiple bloody engagements, Admiral Jarvis regroups her meagre forces. She desperately needs men and ships for the inevitable battle for Proxima. When she hears rumours of survivors being sold into slavery she sends Commander Anderson and his trusted team to follow a lead that will take them to the fiery planet of Prometheus and its terrible secret. Teresa Morato, refusing to believe Spartan is dead, joins the team in the hope of finding him alive.

Fires of Prometheus is a classic work of realistic military science fiction set against the background of the first interstellar human empire.

The continuing saga includes the Star Crusades Uprising and new Star Crusades Nexus series that follows the story of the Centauri Alliance 17 years after the end of the Uprising.