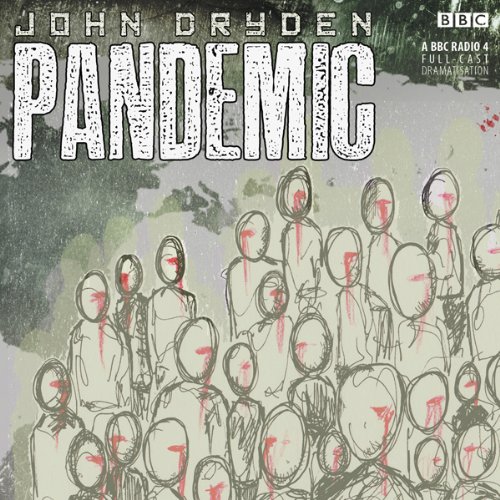 By: John Dryden
Narrated by: Ben Daniels
Try for £0.00

A three-part thriller by John Dryden. In Part 1, 'The Present', Dr Jan Roldano, microbiologist and WHO advisor on infectious diseases, arrives in Bangkok to give a keynote lecture at a medical conference. But when a virulent strain of bird flu emerges, he finds himself trapped in Thailand.

In Part 2, 'The Future', it is five years after a global pandemic that has wiped out half the world’s population. British civil servant Diane Harper is sent to Oxfordshire to investigate the suicide of a government scientist a job that leads to a desperate search for the truth about the origins of the outbreak.

In Part 3, 'The Past', eco-warrior Richard Frankel wants to give up direct action. But then he learns something that leads him into a dangerous world of environmental espionage and a conspiracy that will have a terrible, cruel and profound impact on the world. Starring Ben Daniels, Emily Beecham and Michael Maloney.

What listeners say about Pandemic

If you haven't had enough of pandemics already

I first heard this when it was broadcast nearly ten years ago. Then pandemics were the stuff of dystopia not the mundane reality. The pandemic is much more severe than Covid-19, but that is less important, where it comes from is the real narrative driver. Our focus changes as the tale is told. The afternoon drama on BBC Radio 4 can be really hit and miss. This is definitely a hit. Once you've heard it, the story stays with you for a long time.

This is the BBC at its finest. A feast for the ears and with superb casting and ambience, this mini drama takes us through a highly possible scenario of a world pandemic being unleashed on an unsuspecting and unprepared population. The story is divided into three parts - part 1 opens in Thailand Bangkok where a visiting microbiologist discovers the outbreak of a virus which leaves no visible symptoms and has a deadly progression rate. In part 2 we are introduced to a team working for a department of the home office investigating the suspicious death of a doctor who had uncovered vital evidence suggesting that the pandemic was anything but manmade, and finally in part 3 we follow a group of environmentalist activists who want to ensure climate change is high in the world agenda. To say more would spoil the plot, however this is well worth your time especially in these our uncertain times.

Hollywood blockbuster for your ears.

Fantastic audio presentation by the BBC

Gripping story. I first heard Parts 1 & 2 as BBC podcasts, Part 3 not available in 2016. I found audio-book on Amazon for £10.99. Exactly same as the podcasts with Part3! Is this the BBC making some extra cash?!

the story was genius. read. well and flowed well. made you realise how simply it occurs.