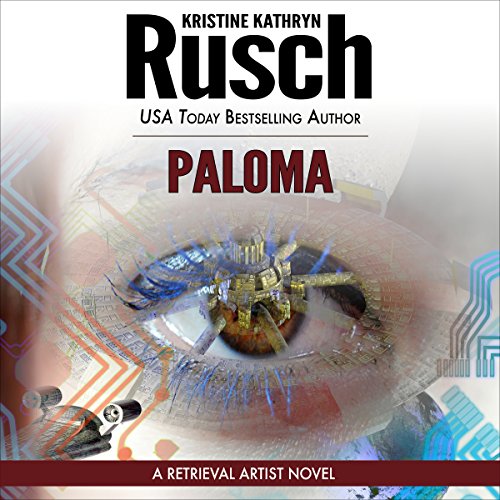 As a Retrieval Artist, Miles Flint helps the Disappeared, saving the lives of those oppressed under the Earth Alliance regime. He owes his livelihood and his very sense of honor to a woman known as Paloma. It was she who was responsible for setting him on this path. And now she has been murdered.

Summoned by Paloma's desperate call, Miles reaches her apartment too late. She is already dead, and a seemingly indifferent police force wants no part of Miles's offer of assistance. He undertakes his own investigation and uncovers a link between Paloma's death and the Moon's largest law firm. The executives there are known to be ruthless. And they have a secret they are clearly willing to kill to protect.

"If there's any such thing as a sci-fi CSI, the Retrieval Artist novels set the tone. (The Edge)
"Top 10 Greatest Science Fiction Detective Novels of all Time." (io9.com)

I enjoyed Buried Deep more than the other RA books (which I also enjoyed). I was pleased that Paloma was equally, if not more, enjoyable...maybe interesting is a better choice. Definitely maintaining my interest and I look forward to grabbing the next.

Since the first book in the retrieval artist series (The Disappeared), I was impressed by the thoroughness of the plot line. The technical aspects of a moon based dome life, as well as on other planets are very well thought out. Then there are the aliens, of which the author has done well to go outside the cliche format of humanoids only, and provided serious thought to the impact of how these would behave based on her predetermined definitions. I applaud the thoroughness of the series as a whole.

Running out of steam?

Ms. Rusch, while a good writer, seems to be running out of steam here with this 5th installment of the series. Too many contrived and complicated plot twists.

Miles Flint is at it again with his cast of supporting characters, story was fast-paced and I found myself listening to it at every opportunity.

Disappointing. What went wrong with this one?

I've read several in this series and have enjoyed them (in spite of the reader, who seems to be trying to read for hearing-impaired elementary school students... or maybe to win a "read like a computer" contest.) The writing and the stories were strong enough to overcome.

But in this volume, the writing deteriorated almost to the level of the reading. Different editor? Characters periodically think and say things that are out of character. Awkward word choices and phrases occur with annoying frequency ("past history," "too many ethics," "clear" where "transparent" would be more precise and in-character, elevator "went down" rather than "descended," and a lawyer is frequently described by multiple characters as "good" when what he is is a highly skilled scoundrel... not "good.")

I don't remember noticing these kinds of idiosyncrasies in the previous volumes, so I'm others in the series will prove to be of higher quality when I get around to reading them.

3.5 stars is what this means

These are detective stories in space. No great strain on the brain matter and some gaping holes in the plot. I felt that I made a mistake buying the entire set after the first one thinking that the author was going to build on that story. She didn't really, The characters continue on with a series of detective stories that are not especially thrilling. I listened to them all and cannot say that I was inspired, but I enjoyed them for what they were, fairly bland. I wish we had 1/2 stars, these books only deserve three and half, the four is misleading but three would have been too low.

I have really enjoyed listening to this series on long trips or walking my dog. Sometimes the dog got a longer walk when I was really into some of the more exciting chapters! Jay Snyder does an excellent job too!

Every time I finish one of these books I say to myself time to try something else, but when I come to choose another book I simply have to finish all the books in the series and download another Retrieval artist story. I just wish I did not have so much trouble downloading them, the software used to do this gets -(minus)5 stars, thumbs up for Kristine Kathryn Rusch but thumbs down for Audible.

I really enjoy this series. Its very immersive and the readers are fantastic. Its Sci/Fi but not too out there as far as politics and curroption. I also think that its great that this book along with the others I've listened to don't contain explicit language or content.