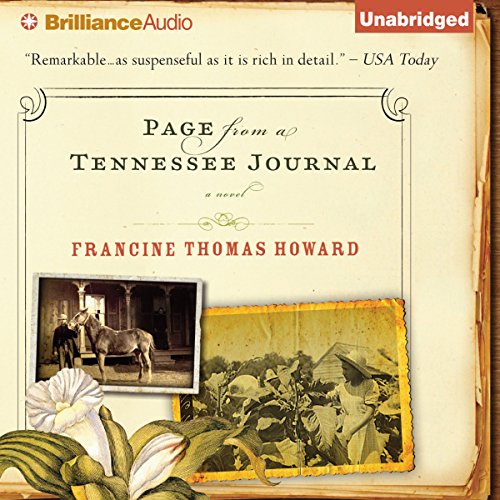 Page From A Tennessee Journal

Page From A Tennessee Journal

It is 1913, shortly before the start of the First World War, and Annalaura is alone again. Her gambling, womanizing husband has left the plot they sharecrop in rural Tennessee - why or for how long she does not know. Without food or money and with her future tied to the fate of the season’s tobacco crop, Annalaura struggles to raise her four children. When help comes in the form of an amorous landowner, who is she to turn it - and him - away?

In this remarkable first novel, as bracingly original as it is exquisitely rendered, Francine Howard tells a moving story of American desire and ambition and the tragic, slippery boundaries of race under Jim Crow.

"Based on a true family story, this haunting first novel admirably revisits a painful time in history. Too often historical novels about women indulge in anachronistic explorations of feminism, but this novel admirably avoids that trap and instead portrays realistic characters dealing with their difficult lot in life.” ( Booklist)

A young field worker is struggling to feed her four children as her husband, a womanising gambler, has supposedly gone off to earn them more money, but seems unlikely to return. The land owner is curious as to whether her husband is home, and if his crops will be sown in time; and sadly for the young mum, he's noticed how pretty she is too.

Interesting for those who don't know much about the realities of Jim Crow. As the female descendant of slaves, this book was difficult for me to finish. But that didn't detract from its excellence in detailing the psychological impact the legacy of slavery had on everyone - White men, Black women, and White women. Narration was better in dialogue, but still really good.

An incredible tale of overwhelming adversity

This story was spellbinding. I was glued to every moment praying for redemption for this poor family.
A word of warning-the sensual content is quite explicit, not apprpriate for the young listener.