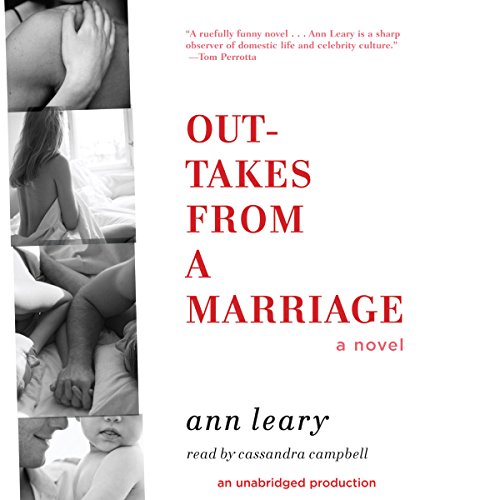 Outtakes from a Marriage

Julia and Joe Ferraro are living the good life in Manhattan now that Joe's finally made it; he's the star of a hit TV show and has just been nominated for a Golden Globe award. After many lean years, they've got a grand Upper West Side apartment and an Amagansett beach house, and their two kids go to elite private schools. Even better, Julia and Joe are still madly in love.

Or so Julia thinks, until the fateful evening when she accidentally hears a voice mail on Joe's phone - a message left by a sultry-sounding woman who clearly isn't just a friend.

Suddenly, Julia is in a tailspin, compulsively checking Joe's messages, stalking him in cyberspace, and showing up unannounced on his sets, wondering all along if she should confront him. Julia's search forces her to consider the possibility that in the long process of helping Joe become something, she has become a bit of a "nothing", as her daughter once described her to her class on career day. A big husband-stalking nothing.

When Julia and Joe first met, she was an edgy East Village girl who wrote music reviews for the Village Voice and threw famed parties in a gritty downtown loft with her friends. Joe was a shy, awkward drama student who followed her around like a lovesick spaniel. After he won her heart, Julia helped Joe evolve into a roguishly handsome charmer who became increasingly obsessed with his looks and his career. Julia, meanwhile, settled into doting motherhood and a new life of comfy clothes and parenting associations.

Now, faced with the looming awards show and the possibility of a destroyed marriage, Julia embarks on an accelerated self-improvement routine of Botox, hair extensions, and erotically charged shrink sessions while dodging the sancti-mommies who lie in wait for her at her son's preschool each day.

A unique take on the perennially popular issue of women trying not to lose themselves in matrimony and motherhood, Outtakes from a Marriage is exper...

What listeners say about Outtakes from a Marriage

Views of a marriage from the inside.

First, the narrator was SUPERB - just perfect. And since the voice in the book is the first person - a New York wife - she felt alive. Just beautifully done. Julia is married to a TV actor and in the very beginning she picks up a strong hint that he is unfaithful. The rest of the book she is dealing with this as things go back and forth from present to past. The "spine" of the story is this possible infidelity issue and everything else hangs on that. She is a totally devoted mother - those sections are so real and true to life - and in great personal doubt - also well done. So how does she deal with this. It completely holds your attention. I highly recommend it. I want to read more by Ann Leary.

Fantastic narration, good story. I really liked Julia and could relate to her struggles as a mother. Cassandra Campbell is one of my favorites!

I loved Ann Leary's Good House. It had great character development and a good old-fashioned plot line. Human flaws mixed in with everyday-life kind of complications.

I was hoping for the same in Outtakes.

But the plot, which revolves around a suspicious wife finding that her husband may be having an affair never rings true. There is too much unbelievable low key angst, when most wives would go ballistic. The technology available is never used to find more about the suspicion.

And there are waaaay too many flashbacks to family scene recollections that do nothing but pad the book and do not contribute to the plot at all except top let you know she had a nice family life at one point.

I like Leary's writing. But I didn't get enough out of this book to recommend it. I will try another Leary book in the future. Everybody deserves a stumble now and then, after all.

I loved The Good House & this wasn't as good as her previous book, but it was a fairly good story. No one knows what really goes on inside a marriage.

After I listened to "The Good House" (which is so so good!) I wanted to hear more from Ann Leary so I listened to "Outtakes from a Marriage: A Novel". It was good.

I actually got a bit stressed out with it and didn't finish it as quickly as I could have, but came back to it. Marriage on the rocks in the celebrity world, but in a very real way that made me a bit sad. It's not really a sad story, but has moments of sadness and regret along with moments of joy and pride and youthful love that most of us can relate to.

The reader was really really good- I'll look for more of her!

Would you listen to Outtakes from a Marriage again? Why?

Well, no. I feel once was enough.

It's somewhat sad, but I must say if she thought her husband was cheating why didn't she check the phone records???? I'm not giving anything away here. She checks his messages but never calls the number or thinks to check the bill and call log???? That's the only thing I thought was kind of dumb.

I don't really have a favorite scene.

If I reveal what really got to me, I'll give something away. I'd rather not do that.

I loved another book from this author and thought this would be a good story. I felt for Julia and how much her life had changed, but didn’t really understand why she wasn’t doing anything with her life. I hated the ending!

5 star all the way

Ann Leary is a very unappreciated writer and I only wish she were more productive because I gobble (or the auditory equivalent) all she puts out there. I intend to go right back and listen to this story once again. Cassandra Campbell is a flawless narrator who reads as if she were herself the author. I never give raves like this except for Alice Munro or Philip Roth.

I kept waiting for the storyline

I loved The Good House so much but this book just never took off for me. Even the ending was lacking.

Have you ever longed for the spotlight of fame ? This book might change your mind. Although it's fiction, Ann Leary makes some not-so-flattering observations on the public scrutiny of celebrity. This is also a touching and intriguing look at a celebrity marriage. Great writing, excellent narration.