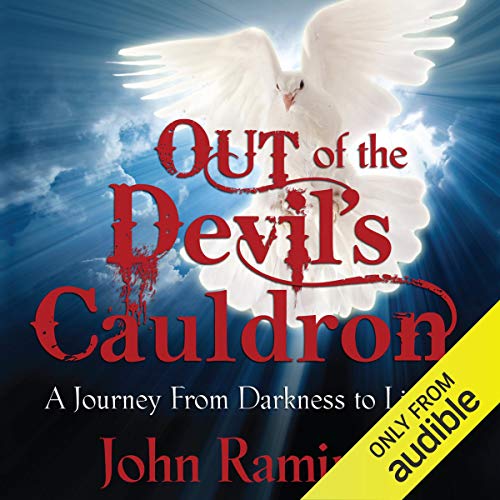 Out of the Devil's Cauldron

By: John Ramirez
Narrated by: Steven Menasche
Try for £0.00

Have you ever wondered if Satan is real?

In his book Out of the Devil's Cauldron: A Journey from Darkness to Light, John Ramirez tells the story of how he was trained to be the third-ranked high priest of a satanic cult in New York City, casting powerful witchcraft spells and controlling entire spiritual regions. But what started as a long spiral into the underworld ended in a miraculous encounter with Jesus Christ that changed the course of his life. Let John Ramirez walk you through the dark alleys of this world as he uncovers the hidden secrets of darkness through his powerful testimony.

People from all ethnic backgrounds dabble in the occult and fall victim to this satanic underworld, never seeing the way out. John Ramirez is one in a million who made it out. His home church for the past nine years has been Times Square Church in New York, founded by David Wilkerson. John has not only been blessed with the opportunity to attend there and sit under the word and mature spiritually, but the Lord opened the door through the security ministry to form a tight bond between him and Pastor Dave.

For two and a half years, John had the privilege and blessing to walk with Pastor Dave, who became a spiritual father to John. He prayed with John, laid hands on him, and even read the manuscript of Out of the Devil's Cauldron before the book was published, giving his blessing. Pastor Dave was so touched by John's testimony that one night, he brought him up onstage to have him share his story with the congregation.

John Ramirez is a speaker sought out by many who want to hear of his involvement in the highest levels of the occult and how he got out. He speaks at churches, schools, rallies, and conferences - both secular and Christian - and has been a featured guest on TV and radio programs. He can be reached at JohnRamirez.org.

What listeners say about Out of the Devil's Cauldron

This book is a must read. Thanks John for opening up about your experience. God is love.

Great story! I love being on the inside!

John Ramirez takes you deep into the annals of dark forces and principalities in high places. Few have gotten out of where this guy has been. If you want an inside into the Underworld and understand what Christians and unsuspecting victims are up against daily, then this is a Must-listen.

I was hooked from the beginning. I finished the book in 2 days. It is very well told.

From someone who grew up with card readings and "trabajos" being a normal and harmless thing, this book opened my eyes to all darkness I was inviting into my life. Those things now have a different meaning simply because of the fact that the explanation is coming directly from someone who experienced the dark side first hand. Offending Jesus is something I never want to do.

This book is a great read for those who are lost, strayed and even hopeless.

Your story John has even given me a new perspective on parenting. I don't think a lot of parents realize the damage that is done to a child's spirit with a few harsh words. In your case John, pushed you towards the dark side. I will forever think before I speak to my children.

Thank you John for sharing your experience. I was moved to tears to learn that (SPOILER ALERT) you were able to forgive your father in the end.

This book had me scared for a minute then I remembered FEAR IS NOT OF THE LORD. As I listened, I became interested in how the devil seems to lure Christians away and how to identify his methods to counter them. It was a homerun, this book helped me with my Initial Sermon, my identification of demon tactics, but most of all...IT LETS YOU KNOW THAT JESUS HAS TOTAL VICTORY.

I would recommend this audiobook for anyone who wants to learn more about spiritual warfare and to hear the powerful testimony of a man delivered from the pits of hell and called as a servant of our Lord and Savior Jesus Christ.

His voice was raspy and I couldn't listen continuously due to personal taste.

Another soul saved! PTL! This book has shown me the importance of prayer. I've been born-again for 15 yrs., am 51, & have seen God's beautiful grace & absolute miracles in my own life. II had a horrible life before I gave my life to the Lord, my last "thing" to try before I'd planned to commit suicide. I wasn't raised in church, but never doubted there was a God. My life changed 100 percent for the better, altho I still went thru life's tragedy's, like my only sibling committing suicide the next yr., becoming disabled & living in constant pain for 18 yrs now, & more. But my worst day with the Lord is still always better than my best day without Him. I am so thankful. Now, thanks to John Ramirez & this bk., I know more about the power of prayer & thank John Ramirez for that & his incredible testimony.

It was easy to listen to this narrator. The author is good at fashioning pictures to walk you through his experiences, and the book moves right along easily, inspite the grafic, and sobering story.

I loved this book! John Ramirez has an amazing story and is an awesome man of God. He's such an inspiration! I'm looking forward to reading the rest of his books.

literally the worst narration I have ever heard. He tries way too hard make it sound like a suspense novel. The way he goes about it completely ruins the book. Wish I could return it somehow.

Totally enjoyed this book. Very well written. Easy to follow. The narrator has a good voice and reads very well. This helped me understand somethings that I went through over a decade ago. Lots of truth.

I honestly liked the YouTube video of this man's story better than the book. The audio book would have been more lively if the author actually read it himself. He has charisma and is captivating in his YouTube videos. Overall this book is ok because of the story he is telling.