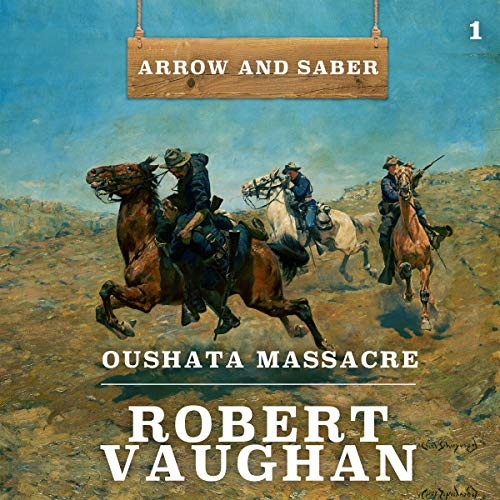 By: Robert Vaughan
Narrated by: Clay Lomakayu
Try for £0.00

Fresh from West Point, Second Lieutenant Marcus Cavanaugh arrives with a platoon of recruits from the East into territory seething with Indian trouble. Two Eagles and his renegade band of Cheyenne warriors have broken the peace, raiding railroad crews and wagon trains, slaughtering men, women, and children, then disappearing into the hills.

Scouting for Two Eagles' war party, Cavanaugh, at last, discovers their winter village, barely escaping with his life to report back to the fort. But nothing in his military training has prepared him for the savagery and danger he encounters as he leads his men against hostile braves in the bloody battle known as the Oushata Massacre.

What listeners say about Oushata Massacre

This is a fast passed western. This is my first experience with both the author and the narrator. I was impressed enough to look for more books by both.

The protagonist is 2nd Lieutenant Marcus Cavanaugh. He is fresh from West Point and arrives as Two Eagles of the Cheyenne has gone to war. The story takes place in 1868 in Eastern Colorado. The book is a standard Calvary against the Indians western story. The book is well written and is past paced. The story has lots of information about Army life in the middle 1800s. There is lots of action, but the book is too short to allow for much character development. The book was a great change of pace story. Looking forward to reading more books by Vaughan.

The book is three hours and thirty-nine minutes. Clay Lomakaya does a good job narrating the book. Lomakaya is an actor and audiobook narrator.

This was a good solid story and I also learned quite a few things about about calvary procedures and commands.