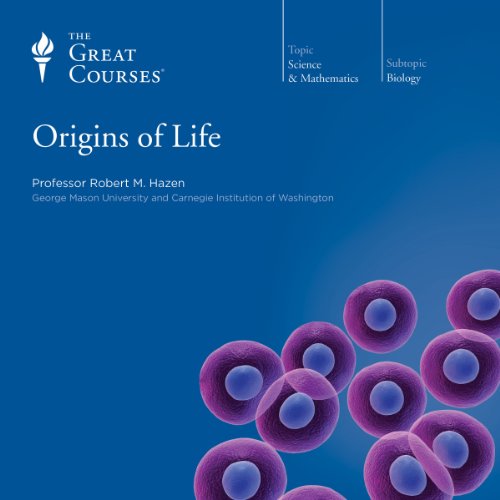 Four billion years ago, the infant Earth was a seething cauldron of erupting volcanoes, raining meteors, and hot noxious gases, totally devoid of life. But a relatively short time later - only 100 million to 200 million years - the planet was teeming with primitive organisms.

What happened? Now you can find out - in a series of 24 vibrant lectures from a leader of the NASA - supported team studying the origins of life in the universe and also one of the nation's foremost science educators. The lectures take you from path-breaking experiments in the 19th century that proved the molecules of life to be no different from other chemicals, to our increasingly sophisticated modern understanding of just how the chemistry of life works, to the near certainty that the 21st century will see spectacular and unpredictable developments in our understanding of how life began. For all its familiarity, life is an elusive concept that is hard to define, much less explain. These lectures show how scientists are systematically building a picture of the process by which those chemical reactions on the early Earth eventually led to the first appearance of the DNA-protein world that remains the fundamental basis of all life today. And you'll join them as they probe for evidence of life beyond our planet.

Crammed with fascinating experiments, surprising results, heated debates, blind alleys, and promising leads, the investigation of life's origins is a mystery story in the truest sense - one in which the clues are slowly adding up but the solution is not yet in hand.

What listeners say about Origins of Life

Would you consider the audio edition of Origins of Life to be better than the print version?

Yet another gem of a lecture course from Robert Hazen. A mind expanding tour de force.

A stunning course. Very complex but if you focus on the concepts rather than the details, you won't get lost. It's hard to imagine a more fascinating subject or indeed, a more dedicated and enthralling lecturer.

An excellent introduction to abiogenesis

I have a lay interest in abiogenesis and Robert Hazen has worked in this field for a long while and is a recognised expert in this field.

It is not overly challenging and skips along at a good pace.

It's a good place for anyone interested in the origins of life to start.

why doesn't this not work on

An Excellent Lecture of Life's Origins

Where does Origins of Life rank among all the audiobooks you’ve listened to so far?

This audiobook was done very well and was enjoyable to listen to start-to-finish.

What was one of the most memorable moments of Origins of Life?

Going over the Miller-Uri experiments was interesting. I've heard much about these experiments, but not to the detail that Dr. Hazen provided, along with the impact that these studies have had on other "origins" work.

What does Professor Robert M. Hazen bring to the story that you wouldn’t experience if you just read the book?

Hearing the lecture gives the listener an idea of inflections and emotion that goes into the material, rather than reading from a book.

This was a great lecture series on the origins of life. As the title indicates, this series sticks with molecular origins ONLY and does not really move beyond unicellular life (bottom up approach). Having a background in chemistry/biochem is certainly helpful, but overall I found this to be an interesting and relevant series on covering the many theories of life's origins.

Pros: Dr. Hazen covers many of the theories held by a variety of disciplines for life's origins in a neat, organized manner. He really drives home the point that there are MANY ideas on how life arose verses the misconception that some scientists feel there is only one means by which life could have begun.
Cons: Without a basic understanding of chemistry, most people would have a hard time following this lecture.
Bottom line: certainly worth a listen for anyone interested in getting a 10,000 foot perspective on the many ideas as to a natural means for emergence of life on earth.

This is a comprehensive overview of the proposed theories in the search for the plausible scenarios for the origins of life. Dr. Hazen brings the subject to life (pun intended) by not only talking about the science, but also the personalities, the politics and the process of scientific exploration.

This book is a worthwhile read for scientists,but is still very accessible to the lay person as well.

This lecture series is presented by an enthusiastic lecturer who has much personal experience with the field. However I find the focus on personalities and events gets somehwat in the way of the science. The material feels a bit dated, referring e.g. to 2010 as a point in the far future. Also I find the large number of explicit references to visual materials unavailable to the listener annoying.
There is almost nothing here about organisms and the early stages of life as we know it; everything focuses on the chemical processes that led to the first life-like systems. This may be what you are after, but if your interest is in biology rather than chemistry, you may wish to think twice. Still for the subject matter it addresses, it's a good overview.

Would you listen to Origins of Life again? Why?

The Professor giving this lecture is a very good public speaker. I like the way he makes science into a story. He makes the laboratory experiments come alive.

The lecture is interesting in that it sheds light on all the different theories of life's origins and really allows you to stand back from your human perspective paradigm and see that we were once and still are chemistry!

Great intro to the subject

Would you consider the audio edition of Origins of Life to be better than the print version?

I've only listened to the audiobook

What was one of the most memorable moments of Origins of Life?

Due to it's format, it didn't really lend itself to most memorable moments. It's a series of lectures and I found them all engaging.

Which character – as performed by Professor Robert M. Hazen – was your favorite?

This doesn't really have characters, but the lecturer did a great job.

Life: harder than you think and we're still working on it.

Evolution has limits. It needs to have something to work with and it needs to have a place to start. I did not fully appreciate the difficulty of these things coming together before I read the book. If you currently think that life simply started in the primordial soup, I highly recommend you read this to get a better understanding of how complicated that concept really is.

Can't seem to get enough of Robert Hazen's courses, so I listened to this great topic a second time, learning more this time around about the origins of life. I'm impressed he remains so enthusiastic about his own beliefs, but presents competitive theories in a very unbiased way. Well worth my time.

Would you recommend Origins of Life to your friends? Why or why not?

Only if one desires a very superficial discussion.

Was Origins of Life worth the listening time?

If it wasn't worth listening to at all I would have stopped before finishing and I did listen to the whole thing!

Hazen goes over all the major facets of this field, breathing life into the theories, the speculations, and the experiments. His detailed explanations of key experiments does require more attention than casual listening, but it's worth the effort.

Great insight into the scientific process

This is a very interesting journey through the work done by scientists who focus on understanding the origins of life. It's a bit challenging, which is what you'd expect from the Great Courses series, no problem there. Just be aware that Dr. Hazen, though he's a brilliant scientist and an engaging speaker, definitely loves rocks and minerals. He spends quite a bit of time discussing the search for early life. Personally I am much more interested in the biology of early life, and he gets into that starting around Chapter 15 out of of 24. Overall though, it's a very good listen. By the end of the series, I felt that I had a good grasp of the main ideas in the field, which is about all you could ask for. Dr. Hazen makes it pretty clear that this is a field in its infancy, and nobody can say with authority exactly how life began.

absolutely excellent. worth the time to listen. There are no clear cut answers, but the truth is clearly out there