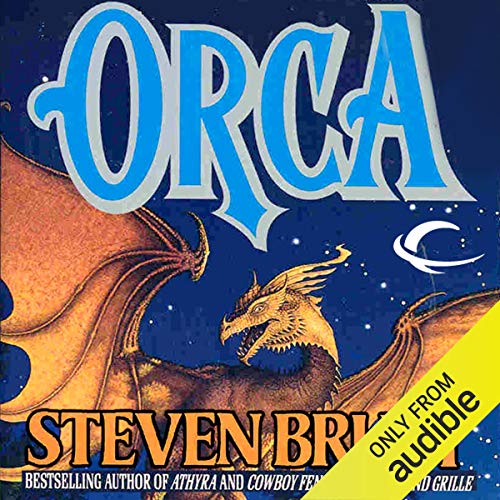 Granted, walking around with two jhereg on your shoulders is not the best disguise for an ex-assassin wanted all over the Empire. But a young boy saved his life and then needs help, Vlad Taltos pays his debt--even if it means uncovering a financial scandal big enough to bring down the House of the Orca and the entire Empire.

What listeners say about Orca

Two great narrators for the price of one

As this book switches perspectives between two characters, the decision to split the performance between Mr. Clark and Mrs. Masters was great. With Bernard's well established Vlad laying the foundation, Mrs. Masters 'Keira the Thief' takes off.

From Property Market to Bank Fraud

Vlad continues his life on the run from the Jhereg, this time with a catatonic companion in tow.

In Orca, Vlad is searching for a way to heal his companion Savn, who the audience met in the previous installment. He happens upon an old healer who is the midst of losing her property. Vlad brokers a deal to help her keep her land, while she cares for Savn and finds a method to heal him. But there is more going on than just a property deal, as Vlad quickly finds out.

While still a good story, it feels like the overall plot has come to a bit of a stutter here, the reader could almost consider this filler. Almost. The most important part of Orca is that we get somewhat of a resolution for Savn's involvement in the story, which carries over from the last book. Full of twists and turns and even a few big surprises, the book doesn't disappoint, but you could easily skip over this without missing a beat in the overall story.

For Orca we get the pleasure of listening to two narrators. Masters gives us a great Keira the Thief, while Clark reprises the always smarmy Vlad. Masters gives a bit of a celtic accent to Keira, which Clark has done a bit of in previous novels; it's good to see a bit of vocal continuity, especially since most of the story is told by Keira the Thief.

Good story, but bigger and better things are to come later in the series.

Another great book in the series ... though the storyline involves banking and finances. I'd prefer that Vlad would "get out of the forest" and get back to his street mystery solving.

I was nervous as a new narrator starts out this book. She does a great job, but I'd prefer to stay with Clark the entire book.

Brust is so good!

one of my favorite Vlad stories! Love the dual narrator production as well. Both voice actors are among the very best.

would recommend to anyone that lokes this series. great readers, helped my trip to and feom work

I liked in the end the two different narrators because of the nature of the story but it took a while for me to not hate it as Bernard is who I am use too.

I found both narrators to be captivating and I tune with the characters they were portraying. I also enjoyed the creative Adventure and style of writing than Mr. Brust brings to the table. He is by far my favorite authors of all time.

Brust plays around with voice and structure

Orca is the seventh book in Steven Brust’s VLAD TALTOS series. It’d be best to stop here if you haven’t read the previous books. We don’t want to spoil anything, do we?

Okay, so you should recall that Vlad Taltos, everyone’s favorite Jhereg assassin, is wanted by his organization because he betrayed them in order to save his wife from the executioner’s ax (or whatever implement the executioners in Dragaera use). Vlad has given up his territory and is on the run. In the last book, Athyra, he met a boy named Savn who helped him defeat a necromancer. Because Savn used a Morganti weapon to kill the bad guy, Savn is now witless, and he’s been that way for a year. Feeling responsible for Savn’s condition, Vlad finds a woman who may be able to heal him. In return, Vlad will try to find and stop the person who is trying to get the woman kicked off her land. He’ll need help from his friend Kiera, Dragaera’s most famous thief. Together they will uncover an extensive plot that involves a murdered financier, collapsing banks, the empire’s Minister of the Treasury, and even the Jhereg organization that is trying to assassinate Vlad.

As with the last novel, Athyra, Steven Brust is once again playing around with voice and structure. Fortunately we’re back to Vlad’s first person POV, but this time Brust also adds Kiera’s first person POV. This is the first time we’ve had a first person account that wasn’t Vlad. (In Athyra we had a third person POV from Savn’s perspective). Also, when Kiera talks, she is relating the story to Cawti, Vlad’s estranged wife, who she has met in a tavern after these events occurred. Vlad is often relating his story to Kiera and vice versa. So, often we get Kiera telling Cawti what she told Vlad that she did during the day and then telling Cawti what Vlad told her that he did all day. This sounds a little confusing, but it’s not really. Brust handles it well.

Brust has also been gradually changing Vlad’s personality. Since the end of Phoenix, Vlad has been a bit depressed due to being alone and separated from his wife and friends. I miss Vlad’s vibrancy and sense of humor, but this (temporary, I hope) period of depression makes sense after what he’s been through. Could Brust also be preparing us for a career change for Vlad? In Orca, our famous assassin has become a forensic accountant who tries to help an old lady keep her land.

While I like this more gentle and noble side of Vlad, I thought the convoluted financial plot of Orca just wasn’t much fun. Almost the entire plot involves Vlad and Kiera investigating a banking scam and trying to figure out who’s involved, how far-reaching it is, and what it means for the woman who’s trying to help Savn. To do this, they look at public records, sneak into offices to steal papers, go through papers for clues, meet people and pretend they know what’s going on so that others will spill information, tell each other what they’ve found and try to work it out together, etc. Maybe it’s just my personality, but I thought this was boring (although there were some bright spots such as when Vlad tries to swagger in a wig and platform shoes). Keep in mind that we’re hearing Kiera tell the story to Cawti after it all happened, so the events feel slightly removed from the present and some of the tension is removed, too. Also, it’s one of those types of mysteries that there’s no way the reader can figure out. We just have to watch Vlad and Kiera make wild guesses and eventually hit upon the right ones. This is not very exciting to me, but other readers may enjoy it.

I am not certain that Brust’s magical system is consistent in each book. Especially the rules for when and why teleporting should not be used. I don’t think this has been dealt with the same way in each book. I’m willing to overlook this, though, especially since I’m not certain.

At the very end of Orca, a couple of huge revelations are made. If you’re a fan of the series, you probably don’t want to miss these. They’re big.

A word about the audiobook version: Because Orca has two first person POVs — one from Vlad and one from Kiera — Audible Studios divided the reading between two narrators. As usual, the wonderful Bernard Setaro Clark reads Vlad’s parts. Kiera’s parts are read by Angele Masters who also did an excellent job. Orca is 9.25 hours long on audio.

He is a fantastic writer and this is well written (in terms of character descriptions, language, etc). However, it seems like he has run out of interesting storylines. The plot is really weak, the pace is slow, the detail gets esoteric, etc.