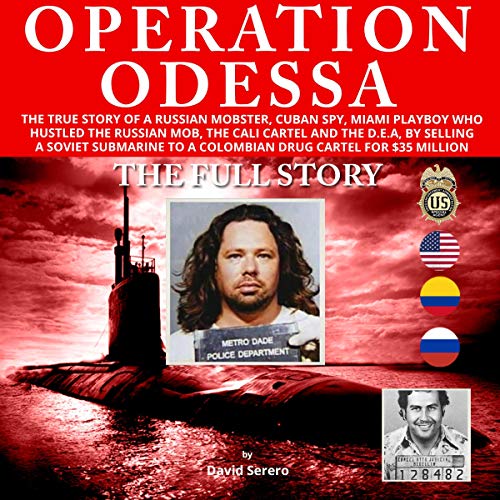 By: David Serero
Narrated by: Akash Asghar
Try for £0.00

The true story of a Russian mobster (Ludwig Fainberg a.k.a "Tarzan"), Cuban spy, Miami playboy, who hustled the Russian mafia, the Cali cartel, Pablo Escobar, the DEA, by selling a Soviet submarine to the Columbian drug cartel for $35 million in the 1990s. It was the crazy life of a Jewish man from Odessa (Ukraine) who became a Russian Mobster, hustled the Cali Cartel, and was arrested by the DEA while buying a...Soviet submarine to help the Colombian cartel to smuggle drugs into the United States.

You'll listen to this story as a fascinating thriller, which truly deserves to be adapted as a feature film as it combines all the required elements to make it a perfect one. This story will take you to Odessa (Ukraine), New York, Miami, Moscow, Bogota, Panama, and more, in the craziness of the 1990s. If you're a fan of the TV series such as Narcos, then this story is for you! You'll discover the genuine life of Ludwig Fainberg (a.k.a TARZAN), getting very creative (with always a lot of comedy!) about saving his life and used his « chutzpah » to come out of the most complex situations.

What listeners say about Operation Odessa