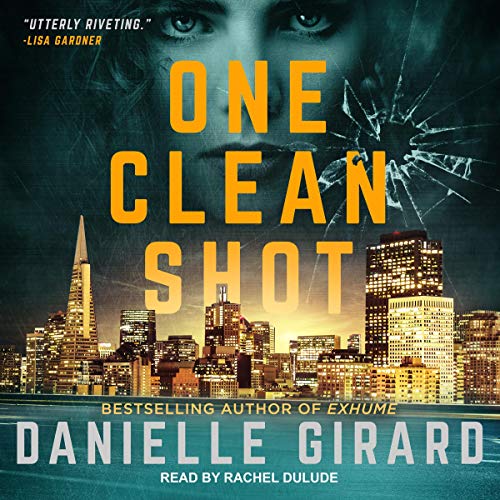 By: Danielle Girard
Narrated by: Rachel Dulude
Try for £0.00

Hailey Wyatt's life is finally settling into a sort of normalcy after the tragedy that struck her family. Or it seems that way until an investigation into the homicide of two powerful San Francisco residents is suddenly the center of a media frenzy. Because someone is taking a strong stance against guns... and they're willing to kill to make sure they're heard. The department has a message for Hailey, as well. Solve the case. Quickly. Or else. Worse, the only connection between the victims is a friendship with Hailey's father-in-law. As the evidence points closer to home, Hailey's partner questions her dedication to the pursuit of justice. As he should. Because Hailey has secrets of her own. Secrets she's willing to die for.

What listeners say about One Clean Shot

I'm a fan of author Danielle Girard and I wish more of her novels were available in audio. Her Dr. Swartzman police procedural novels are outstanding. I failed to listen to Dead Center, the first book in her Rookie Club series, before One Clean Shot. I'll listen to it soon.

Narration of this novel is outstanding.

I've grown shallow in my old age and as much as I still love spy novels, suspense and drama, I love to be entertained. And everything I've read by Danielle Girard has been exactly that. She has just about everything in her novels and I usually learn something along the way. Her books have just about everything. Suspense, mystery, just the right amount of romance (she alludes to it rather than going into details which makes me want to skip pages), betrayal, justice and on and on.

I have little speakers in all my rooms and use an MP3 so with her books I take her around the house with me. If I'm not long in one place I grab the ear buds and simply take her with me, not to mention the car. So there you go. I'm a fan and look forward to her next book. And, although not feminist I still enjoy books about the gals getting ahead.

Danielle Never disappoints.
A great mix of love and self awareness with out being over bearing.

Great book by a great writer!

This book has a great story with twists and turns. I really like Danielle's style of writing and I also love the fact that her characters carry over in many of her series. Great book and you really need to read it.

The narration by Rachel Dulude is excellent. Her smooth transition from one character to next is the best I've heard. It is easy to forget that only one person is reading this excellent story by Danielle Girard.

I have been enjoying this series I cannot say I am not thrilled with this book. I thought there was too many characters and that made it very confusing. I’m glad I also had this Kindle so I could keep looking up which characters was who or I would’ve really been lost and possibly stopped reading it. There was also a lot of errors in the reading of it and portions that the audio book that would not read. Again I am happy I have the Kindle so I could “Whispersync” this book.