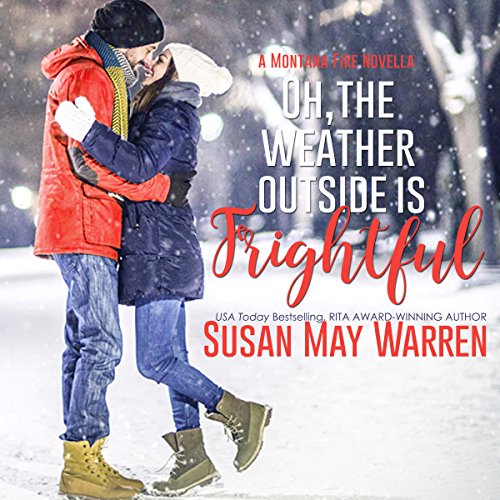 Oh, the Weather Outside Is Frightful

CJ St. John never dreamed his epic summer as a smokejumper would end with a harrowing plane crash - one that crushed his pelvis and rendered him nearly an invalid. He wouldn't have made it through the dark night of pain and danger without brave fellow smokejumper Hannah Butcher. In fact, if he were to admit it, he probably fell in love with her that night.

Hannah Butcher had dreamed of being a smokejumper for years - but dreaming and doing are vastly different. During rookie camp, she would have given up if it hadn't been for CJ St. John urging her on. She probably fell in love with him then - but especially when he held her hand and kept her calm during their terrifying survival.

When Hannah discovers that CJ plans on skipping out on their mutual friends' wedding, she knows he's been lying to her about his recovery - and determines to give him the same stubborn encouragement he's given her by forcing him to attend. But when a blizzard detours them, and worse, they're run off the road, they'll have to face their darkest fears to survive. A Christmas story about the miracles that happen when the weather outside becomes frightful.

What listeners say about Oh, the Weather Outside Is Frightful

always enjoy the stories of Susan may Warren

Light and romantic, this story takes place in mountainous Montana. I’ve never been there, but I find myself fascinated with stories (and pictures!) of Montana, so the setting of this novella was a bonus for me.

Oh, the Weather Outside is Frightful is the fun, cute, quick-moving story of Hannah and CJ and their personal struggles to find the courage inside themselves that everyone else already sees — including each other. They survive a horrific plane crash together, but in spite of their mutual attraction, they each manage to block the other from seeing how much their hearts need that connection… so they spend the following months both denying it. They surely both read more into it than was there, right? Yet they cling to their shared time online, talking as they team up to fight off zombies and save orphans in a game that gives them both false pictures of bravery.

This was my first-ever story by Susan May Warren, and I have to say, I liked it! I should probably have read the others in her Montana Fire series prior to this, but that didn’t scare me away. It was the equivalent of a cream puff. Very light, even with the struggles both main characters deal with.

Also, I listened to this via Audible, and Jackson Nickolay did a great job. I’m kind of picky about narrators, and while some of his voices for the characters (read: CJ’s little sister, for one..) weren’t exactly on my top favorites list, overall I really enjoyed his reading and voices.

(This is a novella. Mine says it’s the extended edition… I don’t really know what is extended, but I’m guessing that maybe the non-extended version doesn’t have the epilogue. And if that’s the case, make sure you read the extended one. Because you’ll be missing out if you don’t!)

This was a good follow up story to the Montana Fire series. Unfortunately, there is a different narrator to this novella, who cannot pronounce one of the characters names correctly. It was also hard to get into this story with a male narrator.

A pleasant use of a few hours

CJ St. John and Hannah Butcher meet while spending a summer as smoke jumpers in Montana. For CJ, it ends with some serious injuries, and Hannah saving his life. For Hannah, it ends with the conviction that she'll never overcome her temptation to freeze in moments of crisis--that she shouldn't even complete her training as a nurse because she'll be useless.

They've both got a lot to work through. Each can see the other's strengths, but only their own weaknesses. Despite bonding as teammates in an online adventure game, they both avoid meeting for months, until finally brought together again.

It's a novella, so not very long, and a pleasant way to spend a few hours.

Loved This So Much!

If you could sum up Oh, the Weather Outside Is Frightful in three words, what would they be?

What other book might you compare Oh, the Weather Outside Is Frightful to and why?

I'd compare it to any of the books by Susan May Warren in the Montana Fire series or the Montana Rescue series.

What does Jackson Nickolay bring to the story that you wouldn’t experience if you just read the book?

The narrator did a great job of doing the voices for both men and women in a believable way. I could really relate to these characters as he read the story.

Flashback scene to the night Hannah and CJ were stranded and CJ so wounded. Also, I loved the new epilogue added to the ending!!!!

Wow! I just love these characters. CJ and Hannah are like real people who have to face difficult struggles and conflicted emotions and expectations. But I loved taking this journey with them...and am looking forward to more updates on them as well as on their teammates and family - some of whom have come full circle from their stories I read quite a few years ago. Loved the narration on this one too!

Too religious for me.

Just a little too much of a religious tone. I'd rather the characters succeed based on skill and life experience and wisdom. I don't like the "oh darn, I'm in trouble, let's pray" part of the story.

this was a very good book. Short and sweet. Great for the holidays. A wonderful love story and great for anyone wanting an inspirational romance. Love Susan May Warren's books.