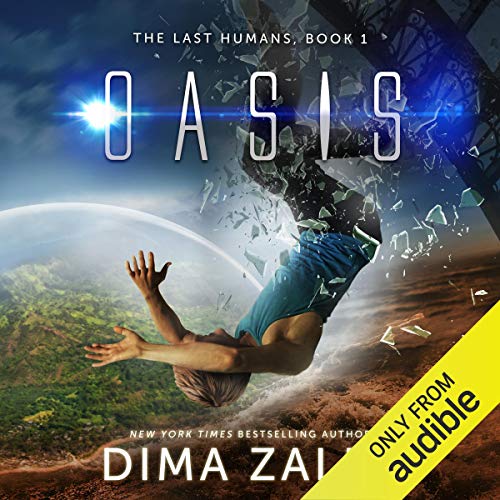 By: Dima Zales
Narrated by: Roberto Scarlato
Try for £0.00

My name is Theo, and I'm a resident of Oasis, the last habitable area on Earth. It's meant to be a paradise, a place where we are all content. Vulgarity, violence, insanity, and other ills are but a distant memory, and even death no longer plagues us.

I was once content, too, but now I'm different. Now I hear a voice in my head, and she tells me things no imaginary friend should know. Her name is Phoe, and she is my delusion.

What listeners say about Oasis

You will get sucked into their world!

I found the reading by the narrator was well done and helped to bring the story to life for me. His various voices have become those I associate with the characters. The recording is clear, without any background distractions.

Theo is one of the many youths on Oasis. The stories based in the future, where machines have taken over the world and caused a global meltdown. Goo covers everything except for the small inside section that is protected by the force field - oasis.

In this society there are no family units and no one ages past 40. You are considered to be a youth until your 40th birthday, then you become an adult. There are also the elderly but on one sees them around.

His friend takes him on a crazy series of events and everything he used to know changes.

This is a super addictive story. I found it to be very fast paced I listened to this book through audible, and its length is 7 hours and 28 minutes. I was pretty much listening to this as often as I could thought the day. I've listened to it about 2-3 times now before writing the review. The novel is left happily resolved but I am quite certain that there will be a sequel!

There is swearing thought the novel, in addition to some violent descriptions/concepts. I would recommend this book for adults and potentially mature older teenagers. Additionally there is some advanced vocabulary that younger readers may not understand - such are morose.

I received this novel via audible for testing in exchange for my honest opinion, which I have provided based on listening to the novel multiple times

This book reminds me of the giver and the 100 with originality thrown in as well. I hope that this comparison does not give anything away. The story starts with three words. That's the only thing in the story they could make anyone turn away. This is the main characters way to rebel.
He is 23 years old but in his society that age is more like a 16-year-old.
While I believe the story could be enjoyed by all ages I think the target audience is 16 to 25. Being a gamer couldn't hurt either.
I do plan to continue reading the rest of the series.

Took me by surprise

The hook in the first chapter totally grabbed me. I was hooked for the first few chapters, but then found myself getting bored. Character relationships seem oversimplified and 2D, and the writing was almost too witty for its own good. Honestly, I think the narration is what killed it - felt very academic, like they were reading a textbook.

But the end totally took me by surprise and finally made sense of all the things that seemed ridiculous and illogical throughout. The 2 main characters were fully developed by the end as well.

All in all, at first the story seemed like a writing prompt gone wrong, but by the end had great characters and deep themes to consider. I'd listen to the next one in the series for sure, just to find out what happens.

This story was awesome! From the first chapter I was hooked and got so into the story that I had to know what was going on. The first half of the book seems so surreal and I thought I knew what was happening and then it turns out that I had no idea what was going on. Things made sense but then you start to wonder if everything else that happens is real or not. Loved the connection between Theo and Phoe. I kept thinking "omg! that's who she is!" and every time it turned out I was wrong (and so was Theo) but when her identity is finally revealed I had no words I was truly not expecting her to be who she was. I really enjoyed this book and can't wait for the next one.

Roberto Scarlato is the narrator for this book. I'm so used to hearing him narrate in other books that this one kind of surprised me. I find he's much better narrating older men than a young teen. I've heard better narrators and worse narrators but I don't blame him because the first book in a series always takes some time to figure out who the characters are.

This book was amazing! It started off kind of weird and I wasn't sure what was going on. But then the story really got going and I couldn't wait to see what happened next! A few times, I had to stop what I was doing (I was listening to the audio version) because it was so intense that I felt like I was there! The concept of the book is really cool and is executed very well. It was scary, insightful, and terrifying all at once! I downloaded the next book before the last chapter was don- which I rarely do, unless it's free (it wasn't free). I recommend this book! If you're just starting it, hang in there. It's a little slow at first but gets SO much better!

Written and voiced by aliens?

I'm not convinced that this book was written by a human, or voiced by one. It comes off feeling like something else read a lot about our popular culture and then wrote a book daring us to figure out that it was written with no understanding of how humans interact, or what we should find entertaining. In retrospect, the concept of the book may just be a cover to excuse the dull characters and their painful interactions. I can't think of a single likable character.

I understand that a large part of what is supposed to sell this book is that we are following characters that are being emotionally suppressed and brainwashed. This you can pick up from listening to the sample. But every character is very emotionally and intellectually stunted. Instead of this obstacle being something that the author uses to strengthen the main character somehow, or make him intriguing, it just seems like an excuse for the author to be lazy and literally explain the thoughts and motivations of all the characters explicitly.

None of these characters have any depth. Maybe this makes the story more accurate, but I'm listening to a book about a dystopian future of techno Luddites; I didn't come to this party for accuracy, I came to be entertained. Many books set in a dystopian future investigate interpersonal relationships and do a better job.

The author doesn't know for what audience to write. He writes like this book is for 10 year-olds, but then fills the book with profanity and words that no 10 year-old would know. (ex: near the end the main character recounts experiencing synesthesia.) All the twists in the book are forecast so far in advance that there was not much reason to look forward. He writes like this book is for very small children, but fills it with enough adult themed material that I would never give this book to anyone young.


Would you be willing to try another one of Roberto Scarlato’s performances?

It would be hard to tell if problems with the reading were his fault or if someone convinced him he should voice characters in such an annoying way.

I would try another performance by him, but I would not use money or credits on it. I'd borrow from a friend.

If you could play editor, what scene or scenes would you have cut from Oasis?

Anytime the characters spoke in pig latin could have been taken out. The pig latin I mean, not the dialog. It didn't do anything to build the characters, or show us anything about their character. Except that the author thinks it's legit code, I guess? The characters never get in trouble for anything they are speaking about when they are using it, even though they are constantly breaking out of the "code".

The zoo scene could have been handled in a much less laborious way.

I don't want to spoil the book for people who decide to ignore my review so I'll stop there.

I hate to leave a bad review for something self published, but I bought this because the reviews were pretty 4.0+. This book is not deserving of anywhere near that.

Each time I listed to the story I was swept away to Oasis. The narrator was wonderful, very distinctive voices for each character. I cannot wait to start the second in the series.

I just could not take it anymore. The reader's cadence either put me to sleep or drove me crazy. He got stuck in a rhythm that was supremely annoying. Add to that, the author's obsessive love and use of the word cognizant, just couldn't finish it.

I have read several of Dima Zales books and they just get better and better. This book is wonderfully exciting. The story is so well woven, it is damn near impossible to stop listening. The narrator is spot on and portraits character emotions flawlessly. Thank you for making my
life richer one book at a time Dima Zales.