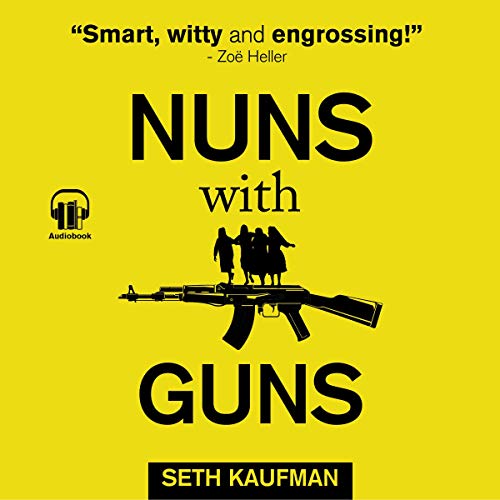 The most hilarious man in hollywood is unarmed and dangerous!

Out-of-control producer Rick Salter wants to leave reality TV behind, get married, and make movies. But it’s not easy. When a senseless murder touches his life, Rick knows exactly what to do - enlist his pal Sister Rosemarie to make a TV series called Nuns with Guns, about four nuns competing to collect the most firearms. Protests and death threats pile up as the sisters travel the country running gun exchanges. Propelled by the show’s spirited stars and crazy stunts - and the shadow of death that looms over every episode - the series becomes a smash hit. As Rick pushes the envelope, trying to save America from itself, a question emerges: Who will save Rick?

“A smart, witty and engrossing satire! Kaufman is a wonderfully sharp-eyed observer of modern American lunacies." (Zoe Heller, Notes on a Scandal)

"Literary gold!" The year’s best new reality show concept is actually a book... It's as hilarious as it sounds!" (RadarOnLine.com)

"Rick is a charismatic antihero bolstered by credible side characters, and in the midst of Kaufman’s sardonic humor, there rings out an earnest outcry for gun reform." (Publishers Weekly)

Nuns Disarm the Public for a TV Show

I really had no idea what I was getting into with this book when I selected it. The title can suggest so many options, so I just dived in head first. I enjoyed the story, certain aspects not so much, but the story itself was interesting. As the title implies, this has to do with nuns and guns. The gun aspects are centered around a gun turn-in effort for a TV show and as a gun enthusiast, I will say Seth gets a lot of things about guns wrong. Doesn’t detract from this being a good story, unless you are adamant about accuracy or know a lot about guns and don’t like to hear made up details.

I really enjoyed the characters. I liked them more than the story, even though I really only thought there was only one real main character. Everyone else seemed to be in a static supporting role and while they had interaction with Rick, they didn’t develop throughout the story like he did. His quick wit, sharp tongue and overall sense of humor provided the needed levity to the subject this dealt with.

Gun control aside, I really enjoyed the story. I thought it was unique and interesting and kept listening even though I am not for gun control or buyback programs. The events that occur and even the human interactions are quite out there, so it was a great diversion from the books I typically listen to. I haven’t listened to King of Pain, so this is my first introduction to Seth Kaufman and have to say I want to listen to more.

As a 2nd Amendment enthusiast, I found tons of fault with this story. I don’t believe the author knows much about guns except how they are depicted in movies and that they are bad. I don’t assume this was meant to be a sermon on gun control, although I could be wrong. While it is clear some research on the subject was done, I found errors in the logic, statistics, and even names of guns. Telltale sign of all of this is that it is called a magazine and not a clip. The only people who switch those two are people who don’t know what they are talking about and Hollywood. I enjoy listening to opposing opinions of my own and assume that I am probably in the minority on that. If you are a hardcore 2nd Amendment fan you might do well by skipping this one, even though it was an interesting story.

George Kuch did a great job narrating. I think he provided the voice of Rick exactly as his personality was and enjoyed all the different voices he provided. He put a lot of energy into his narration and I think that is what helped me to really enjoy the story.

An unfortunate case of sequelitis

I really wanted to like this book, but it's impossible not to contrast it vs its predecessor, The King of Pain. If you're somehow considering reading this and haven't read KoP, I suggest picking up KoP and forgetting that Nuns exists.

KoP works because it orbits around the central theme of imprisonment and the reader and protagonist are both exposed to a bunch of different views of it, yet the protagonist never really seems to be able to connect the dots and relate the short stories he's reading or show he's reminiscing about to his current situation. He never really 'gets' the joke that the book runs on, and this makes the narrative hilarious. KoP is also written with a sort of Roald Dahl-ish approach to characters by casting them into stereotype roles and only fleshing them out enough to set up funny situations. Given a third of the narrative is about a TV reality show in which the majority of the contestants are participating, this works well.

Nuns, for better or worse, is a direct sequel to KoP and attempts to bring back and flesh out several characters from it who were much more effective as simple stereotypes. There's no real central theme unless you count the overly weightly drumbeat of 'Guns are bad' which reoccurs chapter after chapter. Worst of all, the protagonist is acutely aware of it and never lets you forget about it - why be amusingly neurotic when you can worry about your show for a sentence or two and then gloat about its success for a page? All in all, the book feels like an oddly structured morality play instead of a comic narrative, and the level of panic and introspection present in KoP is sadly absent.

Overall, this is book is ultimately forgettable and lacks any of the standout funny moments that made KoP shine.