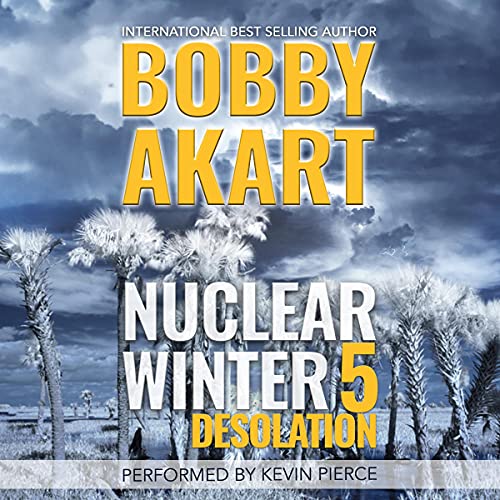 By: Bobby Akart
Narrated by: Kevin Pierce
Try for £0.00

As Nuclear Winter wrapped its gloomy arms around the planet,
man experienced a state of anguished misery and desolation.
In order to survive, some became territorial, shunning outsiders.
Those in positions of leadership wielded it like a club.
While others resisted.

This is how the world ends. Not with a bang, but with many nuclear bombs detonated around the planet. It was no longer a topic of conversation around the dinner table as in years past.

Nuclear Winter enveloped the planet with its relentless barrage of dark, sooty air. With each passing day, more and more people died. In a desperate attempt to give people a chance to survive, some government leaders chose to marshal the assets of their community. It was a polite way of saying take from those who have and give to those who have not.

Hank Albright and his family were not selfish people. However, they were survivors, and they'd prepared for the worst.

What happens when an all-powerful government sets its sights on what you own? Will you willingly give away the food and necessary to keep your family alive? Or, will you fight for what is yours?

For the Albright's, they stood shoulder to shoulder and declared, I would rather die on my feet than live on my knees.

This is more than the story of nuclear conflict. It's about the devastating effects wrought by Nuclear Winter. Our possible future is seen through the eyes of the Albright family, whose roots stretch back to the early settlement of the Florida Keys.

While they fight for survival, they trek across a rapidly deteriorating landscape wrought with danger from both the elements and their fellow man.

It was not our fight, but it became our problem.

Bobby Akart has delivered intense, up-all-night thrillers that have you whispering just one more chapter until the end.

The story was very good, I enjoyed the series, but probably will not purchase any others. The story as written could have been told in 1 or 2 books yet you decided that you could get more money buy selling the series in 5 books. This seems to be a popular way these days and I cannot afford what you are doing.
keep writing as you do , but I think it is terrible the way you present your work.

I enjoyed this series and the author. The only critique is I wish the books were a little longer. That’s just me being ridiculously picky though. Although, I do also believe that Kevin Pierce makes the story too..

Akart is one of the better eotwawki writers.Pierce's narration is an expressive and well enjoyed sound.
Lots of interesting science facts.
Buy it and hope it never happens.
freeedm

Series you don't want to end

Bobby Akard is years along then most of us. He makes you want to go and find and stock a fallout shelter. yet we all do nothing hoping this will never happen in our lifetime. I have all his Audible books and will be a fan forever

This final instalment in the Nuclear Winter series wraps up nicely. The narrator, Kevin Pierce does a great job!

Great finish, you're left with hope that the community will survive. Not a Pollyanna story but one with hope.

Love listening to Bobby Akart’s books and Kevin Pierce is the best. Can’t wait for the next series!

Just a Good as Book 1

Loved it...This series has made me more aware of what could happen and to be prepared ... Reader was awesome. Keep the books coming.

story was great kept me wanting more the ending came quick. ut great over all.