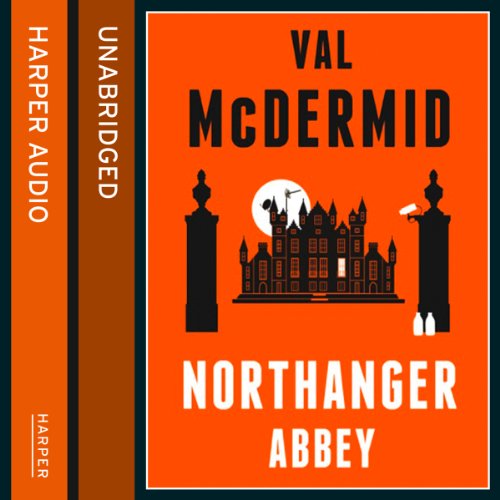 By: Val McDermid
Narrated by: Jane Collingwood
Try for £0.00

A modern re-imagining of the Gothic Classic Northanger Abbey by the bestselling crime author Val McDermid. The second book in The Austen Project.

Seventeen-year-old Catherine ‘Cat' Morland has led a sheltered existence in rural Dorset, a life entirely bereft of the romance and excitement for which she yearns. So when Cat's wealthy neighbours, the Allens, invite her to Edinburgh Festival, she is sure adventure beckons. Edinburgh initially offers no such thrills: Susie Allen is obsessed by shopping, Andrew Allen by the Fringe.

A Highland Dance class, though, brings Cat a new acquaintance: Henry Tilney, a pale, dark-eyed gentleman whose family home, Northanger Abbey, sounds perfectly thrilling. And an introduction to Bella Thorpe, who shares her passion for supernatural novels, provides Cat with a like-minded friend. But with Bella comes her brother John, an obnoxious banker whose vulgar behaviour seems designed to thwart Cat's growing fondness for Henry.

Happily, rescue is at hand. The rigidly formal General Tilney invites her to stay at Northanger with son Henry and daughter Eleanor. Cat's imagination runs riot: An ancient abbey, crumbling turrets, secret chambers, ghosts…and Henry! What could be more deliciously romantic? But Cat gets far more than she bargained for in this isolated corner of the Scottish Borders. The real world outside the pages of a novel proves to be altogether more disturbing than the imagined world within…

What listeners say about Northanger Abbey

If you could sum up Northanger Abbey in three words, what would they be?

What was one of the most memorable moments of Northanger Abbey?

The scene when Henry apologises for his fathers actions, it has a unexpected moment when compared to Austens version which was quite fun

Have you listened to any of Jane Collingwood’s other performances? How does this one compare?

I haven't but I think I will now!

This modernisation is done with real feeling to the original, I would highly recommend it and I will be listening to it again and again,

A modern Jane Austen story with the typically characters and plot set in modern Edinburgh. I found myself smiling and giggeling.

I loved the original Northanger story and I think this book picked up the key elements I enjoyed so much in the original. Jane Austen's version was a satire on the gothic novels, and this novel uses that and plays with it to update it. It was exciting to see how the author would use the storyline of NA (since she followed it scene by scene) and update it, without it jarring, I really shouldn't have been worried. It may not be highbrow, and some purists won't like it, but I found it fun to read if you didn't take it too seriously.

How has the book increased your interest in the subject matter?

I would definitely rad more Val McDernid again, although preferably not involving teenagers. I think the "OMGs" and "totes" might have been a little overdone for late teens/early adult characters.

What did you find wrong about the narrator's performance?

I really enjoyed the narrators reading, her male and female characters weren't too jarring, although I wasn't too keen on Bella Thorpe, her characterisation was a bit too The Only Way is Essex for my liking.

if you treat it like a fun novel to relax and enjoy over an evening, like the orginal, you will enjoy it. If you want to get academic and become an austen scholar, you won't.

Great work by Val McDermid but not entirely 21st C

Would you listen to Northanger Abbey again? Why?

No, the story does not translate very well into the 21st century. Val McDermid has done great work which I thought was well written and a great deal of thought was put into it. However, the story is a little dull.

If you’ve listened to books by Val McDermid before, how does this one compare?

This is a very different genre so it cannot compare. However, I think that no-one else could have done better.

A little too fast and schreechy in places.

I smiled a number of times at the clever way Val McDermid had 'translated'.

If you don't understand today's teenagers..this may help.

Not sure I see the point

I love Northanger Abbey by Jane Austen and thought I'd give one of the re-tellings a try as they are by decent authors. Having listened to this, I don't see the point of the exercise at all.

One of the chief joys of reading Austen is the snarky wit which is entirely lacking from this leaving a pretty average teenage wish-fulfillment romantic story. Not to be entirely negative, I did enjoy some of the modern interpretation of the characters; Bella's fate is just perfect.

Jane Collingwood does a good job but doesn't have much to work with.

What would have made Northanger Abbey better?

Nothing, I wish I had stuck to the original

Has Northanger Abbey put you off other books in this genre?

Re-writes and updates, most definitely

So disappointing and it will be a book I am returning.

Not up to Val McDermid's usual standards. Tried to hard to follow the original too closely to the point of being unbelievable.

A valiant effort from Val McDermid, but this story doesn't really work in the 21st century. The original story had plausible reasons for events, but, despite best efforts, the updated version sounded very weak and rather silly to me.

Its maybe a children's book

What was most disappointing about Val McDermid’s story?

The modernization of Northanger just did not work for me..

I do not know.

This is very faithful to the original, and well recast in 21st century teen talk--- however, take the period out of Austen, and you have a light chic lit tale, too often told. I thought McDermid might bring out the darker satire of Northanger – my biggest concern before downloading was how would I react to McDermid’s usual graphic violence in an Austen classic – no worry! This re-telling will not alarm the most squeamish. I kept waiting for some kind of twist, so I kept listening (well, there’s one tiny cute twist, coming from McDermid). My time would have been better spent re-listening to Juliet Stephenson reading the original. Like an Oxford School paraphrasing of a Shakespeare play – why bother if you want more than the bare story, and if you just want the bare story, why go on (and on) about tweeting Twilight and other modern teen concerns? If the intent was to make the novel more accessible to younger audiences, I think that’s a miss, too: the beauty of Austen is that she draws readers into more complex prose and period. Perhaps if the market weren’t flooded with Austen spin-offs, this might have been a novelty at least.


P.S. The blurbs in the publisher’s summary MUST be about other McDermid novels!