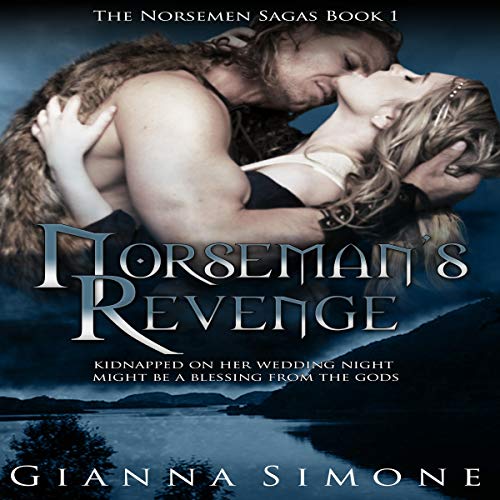 Being kidnapped by a Viking raider on her wedding night might turn out to be a blessing from the gods.

Geira Sorensdotter awaits her new husband, but she's filled with doubts about the man and the marriage. Those doubts are forgotten when the village is attacked, her husband is struck down, and she is tied up and carried off amidst the raid.

Kori Thorfinnson has waited years to take revenge against the man who murdered his wife. But he soon finds the innocent young woman he's taken as his personal slave is not his enemy, despite her marriage to his foe. Her courage in defying him, her caring heart, and the fiery passion she shares stirs feelings Kori hasn't known since his wife died. Afraid to lose Geira, he binds her to him in many ways - not only with rope, but with his body, his collar, and his mark.

Geira quickly learns just how despicable her husband was and, despite her difficult circumstances, grows to care deeply for Kori, her captor. Still, dreams of freedom linger. But once she finds herself with child, she must plan her escape, to save herself and her baby.

However, Kori has plans of his own.

I rather enjoyed this Master/slave romance

This was definitely different than anything I’ve read or listened to, before. Admittedly, some of the Pagan rituals turned my stomach, a bit. However, I was still able to enjoy the budding romance between this Captor and slave. This romance was written like a primitive version of a modern day D/s, Master/slave relationship. The Hero tries to deny his feelings, for his slave, due to the loss and the method of loss, of his wife. This does lead to some hurt feelings and confusion by the Heroine, but they get things ironed out and get their HEA. As with most romances, I wish the book could have lasted a few more chapters, so I could share a little of the Hero and Heroine’s HEA, with them. However, i must be in the minority, with this wish, because the trend of authors ending the book immediately after the major conflict is resolved, continues.

I am also disappointed to find out that there are no other books in or out of this series, by this author, available on audible. Perhaps that will change, in the future. It was refreshing to listen to a romance that was set in a Viking culture. It’s not a common category in the Historical Romance genre.
-V from Kansas

Kori kidnapped Geira on her wedding night before she consummated her marriage. He killed her husband (or so he thought) and set the building on fire. Geira was now is personal slave. Geira's husband raped and killed Kori's wife while his daughter was there. Taking Geira was his revenge. Kori was not always nice to her and throughout most of the book I did not care for Kori. Good thing Geira was a strong woman who could win him over.

Dahlia Lynde did a good job with the narration. I received this free copy audiobook at my request and have voluntarily left this review.

Keeps you on edge

This story starts off really strong and continues through to the end. It will be kept on the edge of your seat throughout.

Unless you get off on having your nipples pinched and being spanked and squeezed sadistically, I suggest you forego this book. Visions of Monty Python and the Holy Grail's ladies in the Tale of Sir Galahad made me laugh. Use your credits instead on two very good books: Hannah Howell's Highland Bride or better yet, Olivia Norem's His Viking Bride. Less crudity and vastly better written! I wasted a credit on this book.

Norsemans Revenge is Interesting , emotional, and riviting. Check this one out will keep you listeng .

This is my first book by this author. I did listen to it on audio. Dahlia Lynde did a good job.

Norseman's Revenge is a historical erotica based on the Viking culture. From the beginning, the audiobook captivated my attention. Kori is a sexy Viking warrior, bent on revenge for a wrong done to him. He captures Giera on her wedding day and takes her as his slave.

Overall, the story was good and I enjoyed it, particularly the Master & Slave elements. The intimate encounters between the characters were passionate and sizzling. I hope to hear more from the author. Dahlia Lynde's narration was done well.