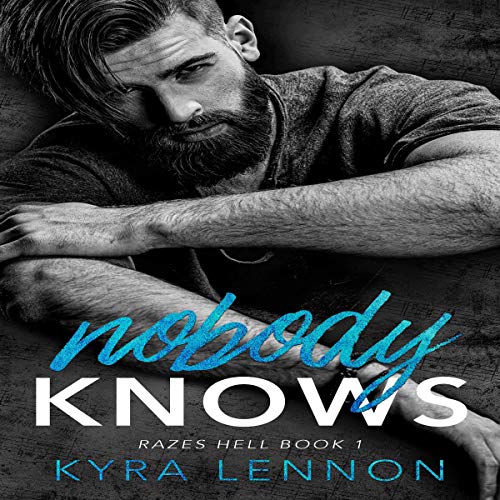 It's not easy being friends with rising rock stars - especially when you're the glue that holds them together.

Razes Hell has taken off in the charts, and Ellie can't believe her childhood friends, Drew and Jason Brooks, are on TV and drawing crowds after years spent playing in dodgy bars. From obscurity to overnight success, Ellie soon realizes life in the public eye isn’t all it’s cracked up to be as dark secrets become headline news and old conflicts are re-ignited. When a fake feud meant to boost the band’s popularity threatens to rip the boys apart for real, Ellie finds herself torn - a position which only gets more uncomfortable when her loyalty to Jason collides with her blossoming relationship with Drew.

Nobody knows how deep their issues run; nobody but Ellie. With friendship, a music career and a new love on the line, can Ellie keep their tangled pasts from ruining their futures?

What listeners say about Nobody Knows

Brilliant story, heartfelt, funny and the narrator is so very good. Poppy royana is clear and emotes the story beautifully. Would recommend this book and this author and narrator pair.

Great book to listen to

This is the 1st time I've heard poppy royana narrate, she does a great job, her voice is very clear. It's easy to listen to but have your ear plugs handy.
Nobody knows is a great story about a rock band, which is made up of four. there are two brothers in the band whom share the same best friend.
Drew is the drummer while Jason is the front man. Ellie is there best pal they have know each other since they were kids. As things start to unfold you find it covers a variety of subjects as with most bands. The characters are very believable. This book in parts gets a bit emotional, well worth the listen xxx

loved thus so much. can't wait to download more by this author. narration was perfect.

pulls at the heart strings

I loved this book, it has brilliant characters that are well rounded and the story was heartfelt and made you feel right along with them. i love Ellie and drew so much!

The narrator was brilliant at capturing every character and voice and really injected emotion into this story.

An absolutely beautiful and emotional journey. Heart wrenching and heartwarming what an incredible read / listen that feels so incredibly real. The characters and the chemistry they shared was so well written. This is not an overly sexual romance but rather a romance that I think will be relatable not only in the past but now as well as into the future...these characters struggle with everyday issues that not only effect the rock n roll stars but even everyday people around the world. The narration was spot on - I absolutely love an accent and this fit the location of the read / listen perfectly. Lennon has written a beautiful, emotional, romance that I couldn't get enough of and I can't wait to read / listen to more!

Nobody Knows by Kyra Lennon is a rock stars romance that I listened to on audio narrated by Poppy Royana.

This is the first book of Kyra’s that I have read and it definitely won’t be my last. The story will take you on an emotional journey. By the end you can’t help but root for Ellie and Drew. I can’t wait to dive into the next book in the series Everybody Knows to get Lucy and Jason’s story.

Poppy did a great job on the narration. I absolutely loved her voice.

I really enjoyed this quick sweet romance and the narrator did a great job bringing out this story.

It was an ok listen.

So I’ll be honest about this book. It was hard for me to pay attention to it. I’m unsure if it was the narrator’s voice or the plot. I just couldn’t get into this book and I’m not sure why. It was an ok listen and I was happy at the when the characters resolved their love for each other. I received this book for a promotional code to review.

I thoroughly enjoyed this awesome book, I am a huge fan of rock star romance novels and l loved Kyra Lennon’s unique and original story and the characters she created. They are realistic and easy to relate to. The three characters have been good friends since they were young, Ellie Hayes and the two Brooks brothers, Jason and Drew, they were all neighbors. The two brothers are in Razes Hell, an up and coming rock band and Ellie, an illustrator wanting to get work on her own and not for who she knows, though the opposite happens when her best friends, the Brooks brothers get some bad publicity. The bands manager wanted Drew and Jason to grab media attention so they created create some controversy, fake fighting only it brings up old wounds and turns to real fighting. Ellie always had a special relationship with Jason, it could have but never did turn into more, but lately she realizes she grew feelings for Drew, the older of the two brothers. But can something come of it, will Jason be ok with it, can Drew get past Jason and Ellie’s special bond. Can the band survive the fighting and then Jason’s fall to old habits. This fast moving story is well plotted and there is never a dull moment with plenty of drama, angst, emotionally driven moments, heartfelt ones all leading to an awesome friends to lovers romance. Kyra Lennon, thank you for this awesome story and the emotional rollercoaster ride.

Poppy Royana is a fabulous narrator and voice artist. She does a great job portraying the characters, humanizing them, capturing all their emotions and projecting them into her performance. She is an entertaining storyteller and a pleasure to listen to. Thank you for this fabulous listen🎧

Great mixture of character development, mystery, and action. Kyra takes readers on an emotional and highly compelling journey between two brothers & their best friend, who happens to be a girl. This book took me on an emotional rollercoaster that had me experiencing ALL emotions. The narration is beautifully done by Poppy Royana. I recommend listening to this book.

Nobody Knows by Kyra Lennon is a great listen. The author wrote great imagery, characters that pulled at you, and story where perceptions are not always accurate. The thought of pitting brother against brother for attention is wrong in my eyes as a media stunt, but the narrator brought the characters to life with her voice. She was magnificent in her performance. I requested this review copy audiobook and have voluntarily written this review.

Ellie and  brothers Drew and Jason had been best friends since childhood. But they still be friends when she is in love with one of them? Can this news feelings torn them apart? Can they handle of the bad media publicity with them being in a raising rock band? A tough and heartwarming love story. Pithecanthropus audiobook is g rear. I received a free copy of this audiobook and I voluntarily reviewed it.