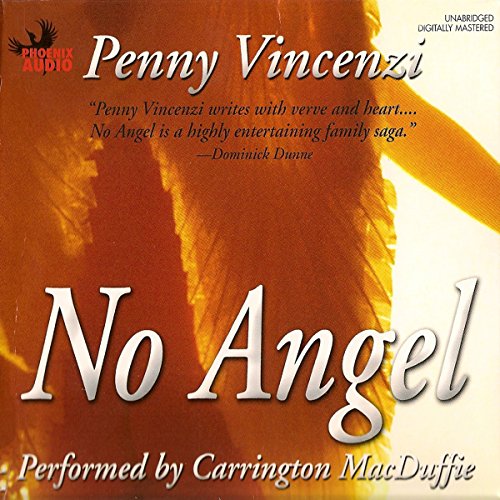 By: Penny Vincenzi
Narrated by: Carrington MacDuffie
Try for £0.00

Enter the world of the rich charismatic Lytton family and their powerful publishing empire in this passionate family saga, spanning the Edwardian era to World War I and the excesses of the glamorous 20s. Enter the world of Celia LyttonÑa woman who is used to getting her way. She moves through life making difficult and often dangerous decisions that affect herself and others, not only her husband, Oliver, and their children; but the destitute Sylvia Miller, whose life is transformed by Celia's intrusion; Oliver's daunting elder sister, who is not all she appears to be; and Sebastian Brooke, for whom Celia makes the most dangerous decision of all.
©2004 Penny Vincenzi (P)2009 Phoenix

What listeners say about No Angel

This was a lovely book predominantly featuring English aristocracy around the First World War. So why the American accent? It detracted so much from the story that I nearly gave up and read the book instead! Some of the pronunciations were so excruciatingly wrong that I wondered who had edited the audio book? I practically hit the roof over ' Passchendaele' in particular. If you can get over the accent then you'll enjoy the story. It has been difficult to rate the book and I eventually settled on 4 out of 5 - a different narrator would have been 5 stars.

Penny Vincenzi at her best. I loved this audiobook and kept listening at every opportunity. It flowed well and was easy to follow. My only criticism was the reader's cockney accent - it's terrible. However, the book is 26 hours long so you do get used to it after a while so don't let this put you off.

This is by far the best book I have ever read BUT WHY oh WHY use an american to read a quintessential english novel. Her accent is absolutely terrible, the book is FAB!

Great read, shame about the narrator

Who's bright idea was it to have an American narrator for what is undeniably an English/England inspired read? The Aussie/cockney accent is atrocious not to mention the complete mispronunciation of English counties and other oddities that we, British born and bred, have enough difficulty with! All that having been said, No Angel is a great read and at 26 hours certainly worth the price of the audio book. Ms Vicenzi has a great way with words and knows how to tell a story and engage the listener and once I stopped sniggering at the mispronunciations etc, found myself eager to listen and enjoy right to the end.

I want ALL Penny's books via Audible, but the majority of them are abridged, and I hate that. Penny succeeds in writing about issues we all wonder about, but with a flair that you cannot possibly stop reading.
So please, will you get them all in the UNABRIDGED format please, because whatever she writes is Brilliant and compelling, As is this one.

Would you listen to No Angel again? Why?

It is a very good book - I love Penny Vincenzi - but an American narrator on an English novel is a no no - spoilt the experience over and over - having said that I finished the book and found it moving at the end - I stuck with it because I liked the characters.

This audiobook was ruined for me by terrible narration. For some reason, the narrator is American (why, when this is a British story based in London?). Her British accent is tolerable (but still awful) when narrating voices of Lytton family, but it's frankly laughable when narrating cockney English. It ruined the story completely for me, and I wouldn't say this audiobook is worthy of such a price tag.

But still, at least she gives Dick Van Dyke a run for his money.

Book was Ok, but some of the accents were awful

Would you try another book written by Penny Vincenzi or narrated by Carrington MacDuffie?

I would not buy another book, set in England, narrated by Carrington MacDuffie

The story was OK. It was the awful accents and pronounciation that made it unenjoyable.

Who might you have cast as narrator instead of Carrington MacDuffie?

As the story was set for at least 95% of the time in England, I would have cast an English narrator. Or, at the very least, someone who could immitate an English accent. To be fair, there were one or two accents that were believable (the totally sterotypical upper class ones), but most were absolutely cringe worthy. I was pleased when one of the characters died because it meant I didn't have to listen to his totally unrealistic voice again.

Names, places and words were mispronounced constantly. I accept that Americans pronounce some words differently, but when an English character is saying things in a way that only an American would, it ruins the flow the story.

Carrington MacDuffie is obviously a very comptetant narrator, but not when it comes to English accents and pronounciations.

Did No Angel inspire you to do anything?

No Angel almost inspired me to return the book for a refund!

The book was good. The storyline was fine. It was the narration that totally spoilt it for me.

I might buy another book by the same author, but I would definitely check who was narrating it first, or buy it in a different format (ie Kindle or 'real' book)

It was the narration that spoilt it for me. Most of the accents were painful to the ear.

Why on earth was an American narrator chosen for this project?

Only on the first book...

but the narrator is driving me daft !..Why, oh why would anyone in their right mind employ this lady to read this story??!!

is an American-accented narrator reading this totally English book? While the narrator has a pleasant voice and the book is fine (passes the time while doing boring chores), the accent's like chalk scraping on an old-fashioned blackboard. note to self: listen to the sample before buying the book! (she also mispronounces place names which easily could be correctly pronounced, even with the 'wrong'accent: that's just plain lazy)

I'm not above a good soap opera...Trollope, Dickens, etc., but this one was so bad that I must warn people about it. It's written in the Romance fiction genre as in Barbara Cartlen, etc. The love scenes are ridiculous. There is so much "fill" that one sits and waits for the plot to move on. The narrator does and okay job with the British accents except for the lower classes which cause one to wince every time she does one. Stereotypical cardboard characterizations throughout.
A big disappointment.

such a great read!

When I began this novel, I was dismayed when I realized the time period in which it took place. After all, I had recently read Ken Follett's "Fall of Giants" and I was afraid of getting bored with the "Roaring Twenties". Well, nothing could have been less truthful! The characters are unique and although some of the circumstances may be the same, the perceptions are what make the story, right? Bravo Ms. Vincenzi! You made me laugh, cry, and gasp with anticipation at many different times! I eagerly await more from you. No pressure! :-D

Why does Audible make only one book of Penny Vincenzi's Lytton Family Trilogy available? Instead of giving the other two books, they give other of her works, but all stand alone novels.
I love Family Sagas and especially this one but I'm terribly disappointed that the other two books aren't available.

A fun to read soap opera that has some real meat

One of the most impressive aspects of this book is the main characters aren't really very likeable. Typically, if I don't like at least the main characters, I don't like the book. But the author does a very good job of taking unsympathetic people whose neck you would like to wring and make you care for them, regardless. Each of them means well just often enough that they cannot be totally without value.

That is important because this is a very long book and it drags in places. What keeps it moving are the characters.

The book does a very good job of portraying England during the 1st World War and the terrible affect it has on an entire generation of men and the sad but very liberating affecting it had on many women. She did a great job of driving home the point I often heard about post-World War II in the US. Women became used to holding responsible positions in the work place. They had authority. They kept businesses together during a very difficult time and in some cases actually created more profitable, more stable businesses, just for the men in their lives to come back and take over once the war was finished. She showed how destroying the combination of the ex-soldier's ghosts, the tragedy he witnessed and the woman's resentment at having everything taken away from her once she had a taste of freedom could be on a marriage, a family, an economy and a nation.

It also paints an interesting portrait at a critical time in British history - the blurring of the classes- the crossing over that occurred and how it affected the country going forward.

There are 2 more books in this series. Audible does not have them. If they did I would read them.

This book is a beautiful family saga that will engage you for hours. Hard to "put down". Highly recommended

I thoroughly enjoyed this story. It was a wonderful long story, one that I wished would never end!

While not exactly unpredictable, this very long book has enough twists and turns and sufficient character development to keep it interesting. This is a good beach "read". I will probably listen to others by this author.

Although predictable, it is a very entertaining story. The narrator and well crafted characters enhanced the book.

Audible, shame on you!

I am so disappointed in audible that they only have one of the three in this saga available. The book was not the best I ever read, but certainly entertaining. When I went to find the second book, I discovered audible does not have it - WTH, audible???

Where are the next two in the trilogy?

Loved this book! A perfect beach read (although I never go to the beach). However, the next two books in the trilogy are not on Audible. What's up with that?