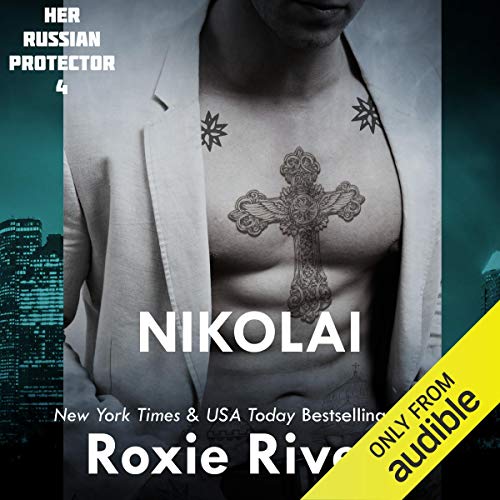 By: Roxie Rivera
Narrated by: Pinky Powell
Try for £0.00

After a brush with death as a juvenile delinquent, Vivian swore she'd never stray across that line again - but there's just one problem with her plan to stay on the right side of the law. She's completely, irrevocably and unabashedly in love with Nikolai, the Russian mob boss who saved her life.

From the moment Vivian appeared in his life on that tragic April night, Nikolai felt himself inextricably bonded to her. She's the bright light in his dark world and the only thing that keeps him from sliding deeper into a life of crime and violence - a mobbed-up life he can't escape no matter how hard he tries.

After Vivian is ripped from his arms in a brazen blitz attack, Nikolai will stop at nothing to get her back - but rescuing her and keeping her safe in his arms isn't enough. Suddenly, Nikolai's only chance to keep her safe is to do the one thing he vowed never to do - he'll drag her deeper into his shadowy world and bind her to him forever.

Because their tangled pasts are about to collide and the shockwave threatens to bring Houston's criminal underbelly to its knees....

What listeners say about Nikolai

The narrators reading was awkward and this person shouldn’t have narrated. Btw it’s pronounced G-OOZ-MAN not G-UUU-ZMAN. It’s a Spanish name not an English one. I couldn’t finish listening. Her narration was painful to listen to.

Another winner from Roxie.... they've all got a great storyline, sex, suspense, secrets, intrigue, twists, surprises, violence and this one had a very sweet love story too as virgin Vivian and Mob Boss Nikolai's long long pent up attraction to each other and desire for one other is finally, yes finally acted on after years of longing looks, mustn't touch and denial. When an explosive kidnapping scene leaves Nikolai for dead and his thoughts that his beloved Ward Vee has been snatched to be tortured, raped or sold into the sex slave industry it sends him into an all consuming rage which kicks off his possessive 'mine' gene.

Hot tattooed Russians, gangster warfare, Dad's from Hell, tortured histories, murder, a sex slave ring, a "who keeps doing this to us and why?" exciting plot and well loved characters from the previous books. Then there's a very thoughtful, sweet, passionate and finally sexy romance which had sometimes humorous, sometimes quick, sometimes dirty but always loving banter between the two of them. Nikolai felt unworthy of Vivian and he wanted to get out for her but instead he unwillingly and unwittingly dragged her further in.

Dual POV's by a good narrator who had a lot of different accents and voices to do which she did well except sometimes I thought Vivian's voice sounded a bit young and with a couple of the sex acts she came across as naive for a woman of her age.

Worth a credit? Yes..... and please keep em coming Roxie.

I loved this book with its unexpected twists and turns. This romance book had plenty of suspense, hot sex, and original storyline. The narrator did a good job accents of the characters. I have loved this book so much that I've listened to it several times.

Wasn't as angsty as I expected but still good

My second favorite in the series, after Dimitri (Her Russian Protector, #2) by Roxie Rivera. It wasn't as angsty as I was expecting, it had just the right amount of story, love and mob drama to keep this series so entertaining.

This is my first time listening to Pinky Powell narrate a series, and she is doing a great job. I just wish I knew if Sergei (Her Russian Protector, #5) by Roxie Rivera will be available in audio or if I should just go ahead and read it.

My favorite so far.

I have read all the books in the series so far and to hear the audio is just amazing. Ms pinkie brings these Russians to life in such a way that's just wow. I mean the book is amazing but to hear your favorite characters. People always ask if you could pick a book to go to movie which would pick. Well I'd pick this series. Especially this book a man who thinks he is unworthy of being loved, hiding sins from the women he loves. A women who truly has the most forgiving heart and loves no matter what. Yeah throw in some fan yourself moments and some you go girl moments with action to boot and you've my fav book in this series.

I don’t know how the writer could make kidnapping and sex trafficking boring but she managed to make it happen. I made it 50% of the way before I started skipping chapters and I didn’t miss a thing. This book was more prude than the MC, which is a lot… So just to recap the story was boring and the sex was boring. This wasn’t even like an “awe” love story. Just bland repetitive convos between the love interests and predictable twist and turns.

Love the stories and although the female narrator is good, she just doesn't have the male voices needed to to make these books sound tough.
The last book in audible is Nikolai. When are all the other books going to be completed?

I didn't care for this book like the previous books, as it drug on for more than half of the book before ANY steamy parts came up. I loved the virgin aspect of it, for once. But this book drug on for me and it lacked excitement in a way I can't explain. The excitement was monotone, perhaps.

Oh my gosh. Wonderful book from beginning to end. Very riveting. Hard to put down

absolutely loved the narrative version of Nikolai. Pinky did a fabulous job with the different accents, speaking Russian and Spanish and voicing both Nikolai and Vee. I highly recommend this book for you listening pleasure.