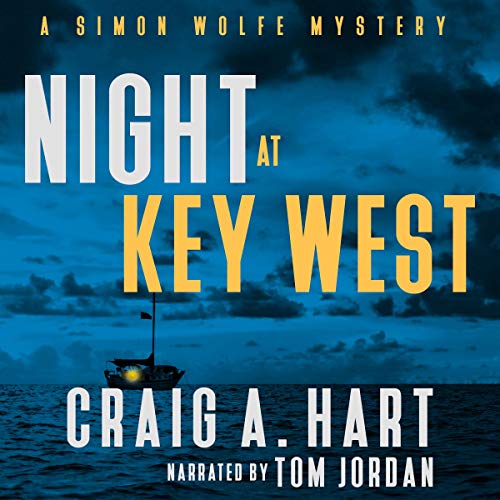 By: Craig A. Hart
Narrated by: Tom Jordan

When private investigator Simon Wolfe is hired to follow his friend’s wife under suspicion of adultery, he could never have guessed it would lead him into a friendship with the world’s leading writer, Ernest Hemingway. Nor could he have predicted the strange and disturbing twists the investigation would take.

The case accelerates quickly when the wife is found murdered in a Key West hotel and discovered to have a secret life. But that revelation is downright boring as the plot thickens with increasingly bizarre revelations, capped off with a macabre ending no one saw coming.

Based on actual events, Night at Key West is a wild ride into history and intrigue, populated by many true-to-life characters and places.

good story, well worth a listen

good story, well told and was hard to stop listening to once started. narrator was also excellent

A great story from Craig, that is superbly read by Tom. Well worth a listen.

I really enjoyed Hemingway in this story, the sections between the protagonist and Hemingway were always fun.
I'd definitely give book two a listen when it comes to audio.

The narration was smooth and well paced, with good sections of distinct characters.

I received this audiobook for free on request, in exchange for an honest review.

Key West. Hemingway. Murder. When private investigator is hired to follow his friend’s wife under suspicion of adultery,
good book full of mystery

Really enjoyed this mystery tale and it was really well narrated with well defined characters.
I will definitely be looking out for the next book in the series.

Night at Key West pulled me in from the very beginning. Simon Wolfe sets out to prove his friend's innocence at the death of his wife. This book takes place in 1937 Key West. I loved the historical details and look into "Papa" Hemingway. The author, Craig A. Hart, wrote some great twists in this story. I had my suspicions on who the killer was, but wasn't correct. Well Done! This book has some great mystery, vivid imagery, wonderful details, and humor.
The narration by Tom Jordan is outstanding. His voice sets the mood perfectly for the atmosphere and gives the various characters distinguishable voices. I could hear exactly who was speaking. I requested this review copy audiobook and have voluntarily written this review. I will definitely listen to more books by this author and narrator.

I thought this was a great short story. It's a crime mystery, character development for the main characters.

Loved the Story and the Narration

I received this audiobook at my request and I provided this voluntary review.

I love mysteries, and this one kept me guessing all the way to the end. Although fiction, this book is based on real events which made it that much more fascinating to me. The narrator was great, and brought the story to "life". This is a quick read and definitely worth a credit!!

The story was composed with many fine details that gave the reader insights into 1930s Key West, even if many functioned only as red herrings. The best attribute of this book, though, was the wonderful narrator, who gave the different characters unique voices and personalities.

A Mystery in Key West

Simon Wolfe is a hard boiled PI whose most prized possessions are his Rolex and his gun. He's also an aspiring author, living in Key West in it's hay day. He's been hired (by three different people) to investigate the murder of an old friend's wife.
Written in the tradition of the great detectives of the dirty thirties, men like Sam Spade and Philip Marlowe, Craig Hart's novel is a great who done it filled with twists, turns and more than it's share of surprises. It also provides an interesting portrait of not one, but two of the most legendary characters in 20th century American literature, Ernest Hemingway and John Dos Pasos.
Great characters, great setting and a murder story you'll love to unravel along with our hero.
A must for every gumshoe detective fan.

Humor, mystery with a Legend

Great narration by Tom Jordan brought this intriguing story to life. With the 19307’s and Hemingway as the plot. Simon wasn’t great at being a PI at least it paid the bills, writing is what interested him. His case became front page when found murdered, a secret life, and things turned bizarre.
Taking off to spend three days with this legend. This was different, a sense of humor and mystery well done. Given ARC audio for my voluntary review and my honest.

As soon as I started listening to this book, I knew I was going to enjoy it. The first thing that came to mind were the Sam Spade or Philip Marlowe books - that type of stylish noir feeling. The setting is Key West; it's the 30's; and you can't lose when Ernest Hemingway makes a cameo. This is a really good start to a series.

I found it interesting that Simon Wolfe doesn't really want to be a private detective - he wants to write - but being a detective pays the bills and he's good at it - even the medical examiner deferred to Simon's expertise. But, after Hemingway reads one of his stories, Simon is good at writing as well.

The mystery was interesting - nothing was quite as it seemed. I loved that Simon worked for both the defense and the prosecution (helpful in getting information when you identify with the side with which the witness feels most comfortable).

The narrator, Tom Jordan, did a great job in bringing the cool noir setting to life.

Mixture of Reality and Fiction

A Night at Key West is centered around the activities of a private investigator hired to track a wayward wife to discover her clandestine activities. As the woman is being followed, she leads the private investigator to the home of Ernest Hemingway, where she is to meet with a gentleman for adult fun and games. As the story unfolds, you learn that many of the characters have different agendas, from writing to fishing to prostitution, to mention only a few. Fans of Hemingway will revel in real life references to the different books and activities of Hemingway, while those not as much in the know, will be fascinated to learn some of the activities of which they may be unfamiliar. Including all these in this "who done it" add a note of realism to this work of fiction. Tom Jordan, as the narrator, does his usual outstanding job in bringing the characters to life, which makes him one of my favorite narrators. Give Night at Key West a listen. It will keep your interest from beginning to end.

Simon Wolfe, a private investigator, is hired to follow a friend’s wife on suspicion of adultery. When he finds out she has been murdered, he investigates to find out the truth, all the while trying to become a writer. The story was fiction, but based on true historic events.

When a story has a factual element therein, one must really appreciate the effort of combining fact and imagination to create an interesting story. The story moves at a good pace, with cleverly thought out misdirections and mysteries as well as some passionate moments. I didnt expect to enjoy this book as much as i did!

Tom was an interesting narrator that made the book an easy listen. His character impressions were brilliant and i look forward to hearing more from him!

Step back in Time

Simon Wolfe wants to be an aspiring author but he has to make a living somehow so he opens up shop as a PI. Its a step back in time to a period without smart phones, not even television; its 4 years after the end of prohibition, and Simon's first case is following his friend Mike's wife around to get proof that she is cheating on him. Incredibly, he follows her right onto the property of Ernest Hemingway, and after the initial confrontation Hemingway takes a shine to him and invites him in for a drink. The case takes a sudden and serious twist when the wife is found murdered in a hotel room, and Mike becomes the prime suspect, and then another twist when the body disappears from the morgue. Hemingway commandeers Simon on an extended fishing escapade on his yacht when Simon has promised to help clear Mikes name and at the same time, unbeknownst to Mike, also help the prosecutor with his case. The story is based on true events and is woven with historical fact and I found it very refreshing and found myself googling the facts in between readings. I look forward to the Simon Wolfe book 2. I was given this free review copy audiobook at my request and have voluntarily left this review.

I love when a book takes you back. This book is not only set in the late 20's, but you feel the events as the scenes unfold. It certainly helps that Simon Wolfe, the main character, meets and hangs with Ernest Hemmingway!

Wolfe is on the trail of a wayward wife. Along the way, he meets Hemmingway, a murdered body, and a big fish. After all is said and done. the ending had a nice little twist on the whodunnit.

I liked the narration as well. Jordan performed a great variety of voices and is the main reason this book felt so real.