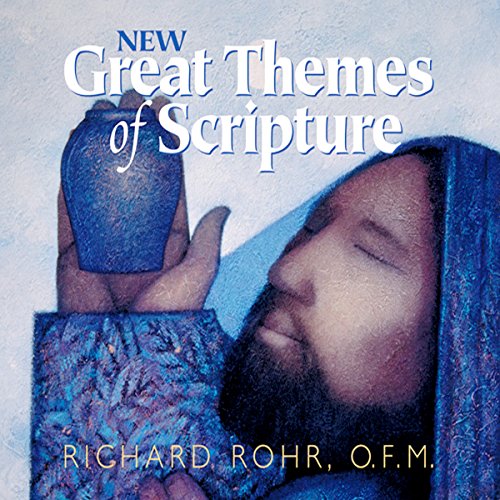 Rohr reprises his best-selling talks on scripture in this powerful new series. He describes the Bible as a text in travail, containing not just conclusions, but a process that mirrors our own journey (three steps forward, two steps backward).

In the three steps forward, Scripture always reveals that we are related to something infinite and that ours is an enchanted and trustworthy universe. Rohr suggests that God is different than we thought and much better than we feared. In fact, God cannot be fully grasped by thought and must not be approached in servile fear. God is present in our midst and is calling forth a people and a consciousness that is capable of divine union. This invitation is revealed in a developmental way in both the Hebrew and Christian Scriptures. The resurrected Jesus finally reveals the full and wonder-filled nature of the heart of God. As a result, Rohr says, "We have nothing to be afraid of and much to be excited about!"

What listeners say about New Great Themes of Scripture

Deepened my faith and understanding.

Would you consider the audio edition of New Great Themes of Scripture to be better than the print version?

Helped me to see the bible as an integrated whole. We tend to take individual verses or passages out of context. Rohr eloquently explains how the main themes of the bible develop and point us towards God and a relationship with him.
This book has profoundly deepened my faith and understanding of the bible and of my relationship with God.
I would recommend both to Christians and to those who feel that what they have heard the church teach has had nothing to say to them.

A great overview of scripture.

Rohr takes scripture as a whole and discusses themes found throughout (macro) rather than focussing so much on individual stories (micro).

Loved listening to this series! Will be recommending it to others and listen again. Thanks.

i am so disappointed that I finished the book! But I look forward to listening again, as it is wonderful. Thank you for the clarity, love and wisdom. at the same time challenging. a rarity in teachers of the Word!

...and heart. an old recording but Perrenial wisdom as always from such a dear man

Loved this book. It’s Such a profound exploration of scripture. Fascinating, original and life - altering.

I stumbled on this author accidentally ( if there are accidents). His voice and his words sooth me and awaken me. I plan to listen to more books by Fr Richard Rohr. His words have touched my soul. I recommend this to anyone interested in moving to a more spiritual walk in Christ

Where does New Great Themes of Scripture rank among all the audiobooks you’ve listened to so far?

The Best and needing to be heard over and over

Made me appreciate the simplicity of God's plan with us humans. I felt encouraged. Father Richard clears up so much of the religious confusion that is strangling Christians today. His honnesty is breathtaking. Thank you for this gift that served me as a guiding light on my spiritual journey.

wow. One of the most inspiring audio books.

loved every second. wished it didn't end. very clear and understandable. it made me love Jesus more and gave me permission to love other people without a "But".
Good stuff.

What did you love best about New Great Themes of Scripture?

Richard Rohr does his own thing. He is confident in his reading and research, and that is clearly reinforced by his prayer life. so when you walk with Rohr you are buying into the journey of discovery and self-discovery. You need to put yourself in a position of trusting him - and he will not disappoint. If you approach this, or other Rohr books, with cynicism you will find yourself challenging everything - and never get to the truths embedded in his words.

I find his ability to see his own weaknesses to be one of his greatest strengths. I believe he is inspired by his prayer life and always has insight.

*f you want to know what true Christianity is...

all about, listen to this. Then listen again. Then, live what you learned. Richard Rohr is a gift to all of humanity.

Love it! Fully embrace it! It is lifelong spiritual food! I highly recommend it! Always enjoy Fr. Richard!

Overall, the series is very, very inspiring. Some of the question answer sessions are hard to hear but the important stuff is very clear.

Rohr does a masterful job in each of the chapters of this book. It's not the same old same old.

I will listen again!

This is wonderful! It has taught me so much about Christianity and is helping me feel like I can think in a different way to get closer to a loving God.