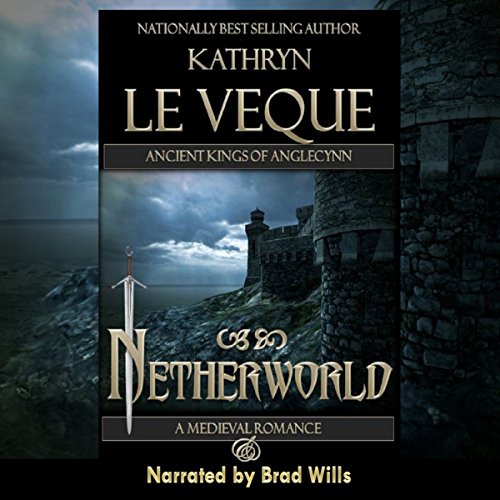 By: Kathryn Le Veque
Narrated by: Brad Wills
Try for £0.00

1197 A.D. - Smarting from the loss of his betrothed, Sir Keller de Poyer has learned not to trust women. A bear of a man with a brilliant mind, Keller is socially awkward but an accomplished knight. He is so accomplished in fact that his liege William Marshal gifts the man with lands in Wales for his meritorious service. But there is a catch - in order to secure the lands and titles, he must marry the Welsh heiress.

And so begins the journey into the Netherworld - a castle with a dark reputation and an heiress who hides her own terrible secrets. Death lives at Nether and Keller is caught in the maelstrom. Can he save his new wife from danger and betrayal before it's too late?

What listeners say about Netherworld

I have listened to many of Kathryn Le Veque's books and she always writes interesting stories that are emotionally charged. You can always count on her books to be filled with true to life dialog with believable challenges along the way. This book also has light humor to keep you smiling. The narration of Brad Wills adds emotion and excitement to this Medieval tale.

I recommend this story to those who enjoy a good story along with a sweet romance. ;-)

Mr. Wills brings to life any story he is narrating and this one is no exception. Loved it from beginning to end.

I absolutely loved this story. There was so much to it, unfortunately not all of it was easy to listen to as it involved familial abuse. However the romance between Sir Keller and Chrystobel was worth the listen. There was plenty of action and suspense to go along with the romance as well. I did find it a bit frustrating that Gryffyn was able to get away with what he did so many times, however I realize that that’s what made the story exciting and suspenseful as well. It certainly brought forth a lot of emotions! Brad Wills once again does an exceptional job with the narration...he doesn’t skip a beat narrating it with his usual flair.

What did you love best about Netherworld?

It literally swept me away to another fantastic world! It's filled with all kinds of emotions, sadness, hope, joy and happiness! When Keller meets Chrystobel, his future wife, he suddenly senses that something is wrong and that the resident of the castle are hiding dark secrets. The story grabs you and holds you until the very end.

Sir Keller de Poyer was my favorite because he was a respected knight and a great protector but he was, also awkward with people. This made him a refreshing and unique character!

Brad Will has done it again! His voice was perfect because it was the way I imagined Keller's voice.

I never listen to an audio in one sitting, I prefer to taste it chapters by chapters. Listening to audio, relaxes me! And since, I'm a huge fan of Kathryn Le Veque's medieval novels, it's always a delight to listen to her stories. They totally captivate me!

If you love a story filled with strong emotions and rich characters, then I highly recommend NETHERWORLD!

What a great narration by Brad Wills. I loved this book by Kathryn Le Veque and Brad Wills only made it better!

love all of her books. wish Brad Wills narrated al

love all of her books. Wish zbrad Wills could narrate all of them. cant waot to read more.

Netherworld will leave you changed

Once again, I’m captivated by this author-narrator team. I had the opportunity to listen to this audio twice. Second time around, it was just as exciting and suspenseful as the first. A great production from start to finish. Ms. Le Veque’s stories intensify emotions with her captivating plots. She brilliantly draws the reader/listener emotionally--hook, line and sinker. You love, laugh, hate, stomp your feet, and ultimately draw swords and daggers, ready to do battle, alongside hero and heroine.

Nether Castle, located in Ireland, is controlled by Gryffyn, a madman, son to the Laird. Griffin is ill-pleased with his father who’s recently traded his keep and lands and his sister’s hand in marriage to a knight of William Marshall’s choosing, Sir Keller. He terrorizes his father and two sisters. He takes great pleasure watching them beg for mercy.

In fact, Gryffyn is ill-pleased with both sisters, as well. His youngest sister, Izlyn, now 12, has known fear and terror since her mother birthed her. She’s been thrown in the dungeon countless times by her brother. At a young age, Izlyn stopped speaking, further angering her brother. All comes to a head when the new owner of Netherworld, Sir Keller, arrives at the castle.

The prologue drops the reader into violence and anger, scarcely leaving room to breathe. After the furious fight, all is put to rights. I can breathe again, but very dramatically the tables are turned and the impossible happens. This cliff hanger sucked the air from the room once again. Chapter one takes us back in time to the day before. Now we find what leads up to this gut-wenching moment.

Sir Keller is a great knight. His battle field strategies have carried him to the point in this story. He finds he’s to marry a woman 21 years younger, Chrystobel. Frankly, he’s not interested. That is, he’s not interested until he happenstance meets her outside the gates of the keep before he’s introduced. Life isn’t looking too bad after all. Sir Keller is very shy with women, but she intrigues him. His stance of protection and kindness to these two abused women softens my heart. His love, tenderness and concern for Chrystobel and her sister charm the most hardened heart. The rest of his fellow knights (very interesting men—can’t wait to hear stories about them) understand what the girls have incurred in their lives. They are ready to defend them with their lives.

Both Chrystobel and Izlyn are very skittish. Their brother has been abusive for so many years, they expect a heavy-hand from men in general. These girls learn a lesson from Griffin. They learn men cannot be trusted, rather they need to be feared. Just as I think Gryffyn has been cornered, his reign of terror can be not more, he connives his way into the keep. His sole aim? To kill and take what is his.

Narrator Brad Wills pulls the story’s action from its pages, wraps us in the turmoil of evil. I enjoyed experiencing the girls’ hesitancy. I love how he captures the timidity of Chrystobel, his marvelous job in conveying her fear of telling the truth and what it may cost her. Within a battle, he takes me there – the quickened pacing of words and tone, produces the desired effect. Tension builds in my chest like a spring wound tighter and tighter.

Come to Netherworld to experience true evil and true love. You won’t be quite the same when you depart.

A story about an abusive brother who beat up everyone in the castle, his sister marrying an English knight and it all coming to an end....

Really good and I enjoyed it...

Listening to the audio of this wonderful story by the great Brad Wills, was just awesome. I read it some years back but listening to it was such a treat. Kathryn Le Veque knows her genre so well and NEVER disappoints. She touches on the sensitive subject of family abuse and the effect there of. It is a heart rending tale of hurt and pain, but also of compassion and love that heals and restores and warms the heart. True to Le Veque form you can expect a beautiful epilogue which will leave you smiling and wishing for more.