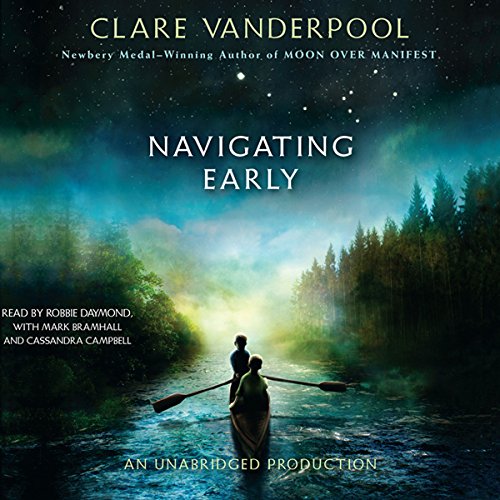 At the end of World War II, Jack Baker, a landlocked Kansas boy, is suddenly uprooted after his mother's death and placed in a boy's boarding school in Maine. There, Jack encounters Early Auden, the strangest of boys, who reads the number pi as a story and collects clippings about the sightings of a great black bear in the nearby mountains. Newcomer Jack feels lost yet can't help being drawn to Early, who won't believe what everyone accepts to be the truth about the Great Appalachian Bear, Timber Rattlesnakes, and the legendary school hero known as The Fish, who never returned from the war.

When the boys find themselves unexpectedly alone at school, they embark on a quest on the Appalachian Trail in search of the great black bear. But what they are searching for is sometimes different from what they find. They will meet truly strange characters, each of whom figures into the pi story Early weaves as they travel, while discovering things they never realized about themselves and others in their lives.

"This multilayered, intricately plotted story has a kaleidoscopic effect, blurring the lines between reality and imagination, coincidence and fate." ( Publishers Weekly)
"Newbery Medal-winning author Vanderpool's sharp, honest narrative, sparkling with the stars of the night sky, pieces together an elaborate, layered plot with precision, weaving multiple threads into a careful, tidy conclusion perfectly suited for those, like Jack and Early, who want to believe." ( Booklist)
"Returning to themes she explored so affectingly in Moon Over Manifest, Newbery Medalist Vanderpool delivers another winning picaresque about memories, personal journeys, interconnectedness - and the power of stories." ( Kirkus Reviews)

What listeners say about Navigating Early

I read lots of books, most of them I really enjoy. every once in a while I find an amazing book that stays with me. Navigating Early is one of these, I laughed and cried. the author has made the characters so real dealing with so many things you come across in youth and adulthood. I love early, this is a book I shall keep to read again. thank you for this story

I loved Clare's "Moon Over Manifest" which won the Newberry. This has a similar feel, a gentle, deep story of two Maine boarding school boys having lost family members and coming to terms with it. There is a weaving of past and present, fantasy and reality as the boys follow in the footsteps of a legend... I felt it was nicely done and easy to follow. You do have to suspend your disbelief... but it isn't jarring most of the time. One of the boys is high functioning autistic with OCD, seizures and unusual math abilities... watching the boys friendship grow despite their differences is part of the joy of the book.

I like coming of age stories and this one was very good. The picaresque elements are satisfying as the two engaging main characters search for important answers. The fairly obvious allegorical use of the Pi story makes an interesting background, and I really enjoyed Mark Bramhall's reading of those elements. I think this would make an excellent vehicle for teaching the novel to the middle-school grades.

Beautiful book with many amazing messages. Jack baker is an amazing protagonist who spreads love.

Navigating Early reaches deep into your heart and asks that you shed a tear or too, laugh a lot, and deeply consider your place in the universe.

Beautiful story, our kids love it and so do I!

I can't begin to count the nu.ber of times we have listened to this book. It has mystery, imagination, suspense, love, trials, intermingled with tolerence and respect for others, understanding the other person's perspective, dealing with grief and moving to a new place, and growth. Such an amazing book. Read anything you can get your hands on by this author, she is wonderful!!

listened to this on a family trip. I love the twists the author takes you on, only to return back to it.

I had the pleasure of reading this as a part of a book club. At first I wasn't really into it, but something shifted around Chapter 6 and I was hooked. I decided to try it audibly at that point and believe that made it an even more enjoyable book. There are no coincidences indeed Mrs. Baker.

I gave performance a 4 instead of 5 because of the storytelling of Pi. It seemed as if it needed to be Early’s voice and bothered me every time the story switched to Pi. Jack was awesome at telling his part of the story however. Good, clean, feel-good read.
Like Vanderpool’s other book, Moon Over Manifest, this should be made into a movie. 💕

I listened to this audio book with my daughter and it has become my new favorite book! We just got done listening to the whole thing a second time!
The characterization, the richness, depth and complexity of the plot... it is excellent, and a book that should go on the shelf with other classic required reading.

Also the performance was top notch. A quality production all around.

My daughter and I listened to this together. It was a great story, and very captivating. There were some fun twists in the story, and I loved the way the characters' thinking came together.