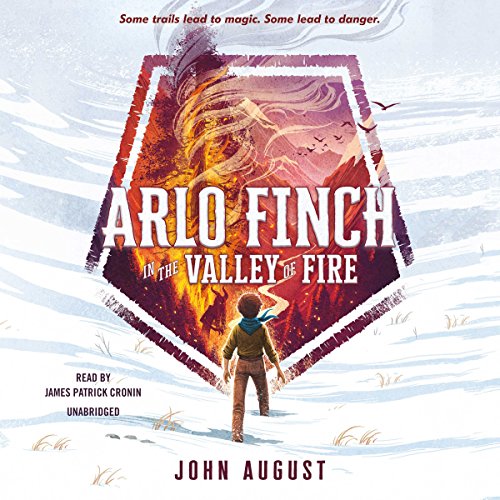 Arlo Finch in the Valley of Fire

This is the first book in a spellbinding fantasy adventure series so believable you may wonder if it's happening in your own backyard.

"As Arlo looked around, the walls of his room began to vanish, revealing a moonlit forest. Only his bed remained and the frame of his window, through which he saw the girl. The world on her side of the glass was sparkling with silver and gold, like a palace made of autumn leaves. She looked off to her right. Someone was coming. Her words came in an urgent whisper: 'If I can see you, they can see you. You're in danger. Be careful, Arlo Finch.'"

Arlo Finch is a newcomer to Pine Mountain, Colorado, a tiny town of mystery and magic, but he has already attracted the attention of dark and ancient forces. At first he thinks these increasingly strange and frightening occurrences are just part of being in Rangers, the mountain scouting troop where he learns how to harness the wild magic seeping in from the mysterious Long Woods. But soon Arlo finds himself at the center of a dangerous adventure, where he faces obstacles that test the foundations of the Ranger's Vow: Loyalty, Bravery, Kindness, and Truth.

What listeners say about Arlo Finch in the Valley of Fire

Perfect for a car journey or plane ride!

I loved this book - would have adored it as a kid and ate it up as a 27 year old. It kept me totally distracted on a long flight and car journey. Can't wait for the next one.

The whole family (kids 6 & 9) loved this book. So engaging it only took us less then a week to finish... can’t wait for the second book.

We listened to this book as a family (kids are 10, 9, and 6) and it was great! The perfect mix of adventure, strong characters, and an engaging story. Can’t wait for the next one!

Absolutely LOVED it ❤️ The story was fun and grabs you right from the start! You feel like you're right there with your best friends on an amazing adventure 😜 The narrator was AWESOME 😎 I can't wait for the next book!

Fun to listen to.

Story has a lot of interesting side-factors. Character and story development is soft on the edges, but very enjoyable. Not a lot of plot twists or surprises. Lots of fun. Highly recommend the series.

Wow! It’s amazing! I love how unusual it is. It’s a must read!As soon as I started listening,it captivated me 🥳

Awesome throughout the whole book. I wouldn't argue AT ALL if some told me to read/listen to it again! Good for ages seven and up, it's an amazing book, but I would not debate if someone said it had some creepy or intense parts. Another plus, the narrator reads it so smoothly there wasn't one word I couldn't understand. Overall, once your seven, I think everyone will love it. 😁😁😁

just what the doctor ordered

I know the Potter comparison is there, but this book holds it's own in the YA category. Such a good listen. Very creative and enjoyable. Can't wait for the next installment.

love this book, will recommend to my friends!

I download it, and took me two days to finished it. I somehow just can't put it down!

Picked this up after listening to Launch, the podcast chronicling it’s creation. The story does not disappoint. Well-paced magical adventure set in the mountains of Colorado.