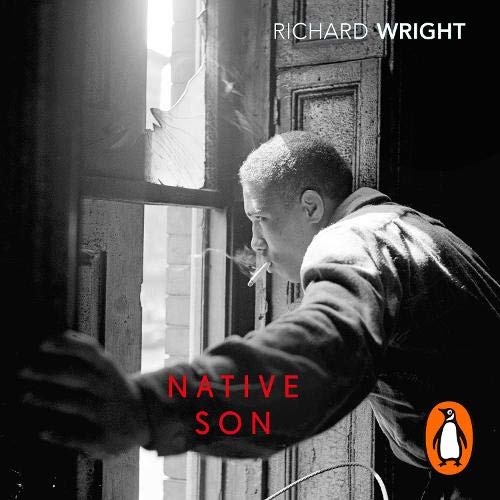 By: Richard Wright
Narrated by: Peter Francis James
Try for £0.00

With a new afterword by Gary Younge.

Reckless, angry and adrift, Bigger Thomas has grown up trapped in a life of poverty in the slums of Chicago. But a job with the affluent Dalton family provides the setting for a catastrophic collision between his world and theirs. Hunted by citizen and police alike, and baited by prejudiced officials, Bigger finds himself the cause célèbre in an ever-narrowing endgame.

First published in 1940, Native Son shocked readers with its candid depiction of violence and confrontation of racial stereotypes. It went on to make Richard Wright the first best-selling Black writer in America.

"[Native Son] possesses an artistry, penetration of thought, and sheer emotional power that places it into the front rank of American fiction." (Ralph Ellison)

"The most important and celebrated novel of Negro life to have appeared in America." (James Baldwin)

What listeners say about Native Son

When I picked up this book it was only because a college teacher had recommended it to us as a class. We were given introductions and endings of various books, and all of us had to guess which book that intro/ending had come from. These had all been favourites of his. Of these books, Native Son was one of them, and I decided to give the book a go to see why he had decided on this one.

As a fan of Shakespeare's tragedies there is something very Shakespearian in how Wright executes this masterpiece. I'm not saying that in a dreary 'great this is two hours long and I don't know what's going on' way, but in a way where you know the author has thought of every plot detail. At the same time, the narrative doesn't try to complicate things, but instead keeps the pace building and draws you in deeper and deeper.

Bigger Thomas is a brilliant character. You want him to do well, but as the plot develops you begin to realise that there really is no hope for him to overcome the racist/communist fearing society he lives in. Even when he is given an opportunity to make something of himself he inevitably has to go on the run, and Wright follows him up until his death which hits us with such a bitter feeling of defeat at the end.

I also loved Peter Francis James' performance for narrating. He does best when he's voicing Bigger, with a masculine tone that suits him. Yet he isn't afraid to put a tone on for other characters, whilst also not becoming too camp it ruins the plot.

I can't recommend this book enough. It's neither intimidating or thoughtless, but rather fierce and beautifully structured. It's not just a book that has lasted these past decades. Actually, I think it's a book that even now will last for a very long time.

Don’t listen to anything else until you’ve listened to this. Everyone should know this book.

Up until recently, and to my shame, I hadn’t read anything by Richard Wright. Wright, in his novel, The Native Son, paints a picture of racial and social divide coupled with a blissful ignorance of the people who simply did not understand Bigger Thomas or his indeed situation, I think here the Daltons and Jan. Bigger lacked a belief in himself or the system in which he lived, I think here of Bigger looking up to the sky and seeing a plane flying high above and saying “this is what I would like to do” but knowing that he had not a chance in hell of accumulating this dream. This is a very powerful novel which I read and listened to. The audible version was first rate.

Compelling and relateable. An intensely emotional account, written by a great mind of our time.