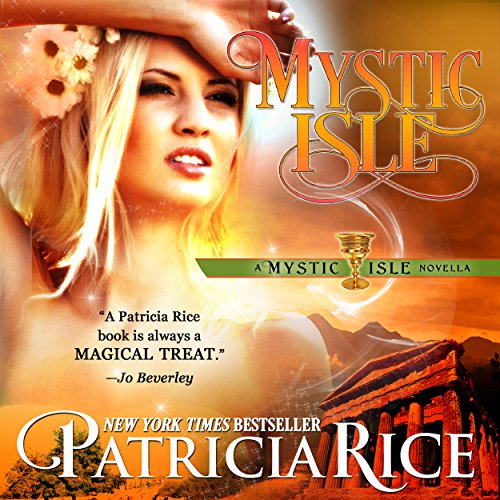 By: Patricia Rice
Narrated by: Coleen Marlo
Try for £0.00

Newly appointed priestess to the Temple of Aelynn Tasia Olympus is burdened with the greatest task to face any leader - saving her acolytes from a tsunami and finding them a new home. Her ability to communicate with the goddess cannot tell her how to protect three dozen virgins and an equal number of soldiers and sailors as they flee their doomed island. Experienced captain Nautilus the Navigator can tackle storms and sea, but obeying a young Seer who tells him to sail impossible shoals requires a level of belief that he doesn't possess. Giving up his future for a priestess who must remain untouched was not the payment he'd expected for his years of service. Together they must build a new home and sanctuary out of a volcanic island that promises plenty to those willing to sacrifice all they know for a future they can't predict.

What listeners say about Mystic Isle

This is a lovely fantasy island where two subcultures must learn to integrate to survive. Guided by a Goddess and her priestess in a magical paradise, these evacuees learn faith and a new peaceful way of life. More romantic utopia than political or civil strife.

This is a new series of Greek Isle inhabitants who worship the Gods. She was just inherited the title of priestess to the Temple of Aelynn, Tasia had been given a vision that would throw the entire island in turmoil. The island was going to fall to the great waves due to earthquakes. Taking her virgin maids and leaving the island has never been heard of but to save them all she mush follow her goddess's order. Along with the maidens she enlists the help of the male body guards who have vowed to protect these virgin maids. After a long trip on the oceans and seeing their land, Greece fall to the earthquakes and tsunami waves that came to the lands. After a very long ocean trip they come to a mist shrouded island that seems to give them protection. This is the beginning of the new legend of those who live under the Gods and Goddesses protection. This books was an easy listening one. Can't wait to see/hear how the next book proceeds under the new life all must now acclimatize themselves to. And the new laws that give them to procreate.

Good but confusing if you read it first

The H is both good and a piece of garbage during the first half of the story. No faith unless he sees it with his own eyes. The h was a bit irritating at times but she was new to her position and was still learning the ropes.

The next book obviously takes place hundreds of years in the future so when I started reading it, I didn't realize that it was part of the same series.

I enjoyed historical fiction s by this author, but I don't think I will listen to any more of her books. I know that the genre is fantasy, but I find the underlying pagan messages disturbing