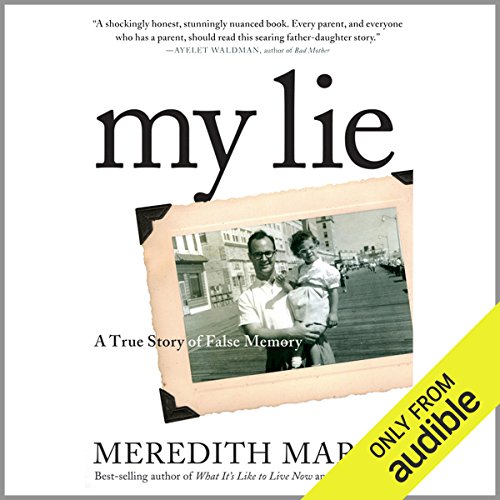 Meredith Maran lived a daughter's nightmare: she accused her father of sexual abuse, then realized, nearly too late, that he was innocent.

During the 1980s and 1990s, tens of thousands of Americans became convinced that they had repressed memories of childhood sexual abuse, and then, decades later, recovered those memories in therapy.

Journalist, mother, and daughter Meredith Maran was one of them. Her accusation and estrangement from her father caused her sons to grow up without their only grandfather, divided her family into those who believed her and those who didn't, and led her to isolate herself on "Planet Incest" where "survivors" devoted their lives, and life savings, to recovering memories of events that had never occurred.

Maran unveils her family's devastation and ultimate redemption against the backdrop of the sex-abuse scandals, beginning with the infamous McMartin preschool trial, that sent hundreds of innocents to jailseveral of whom remain imprisoned today.

Exploring the psychological, cultural, and neuroscientific causes of this modern American witch-hunt, My Lie asks: how could so many people come to believe the same lie at the same time? What has neuroscience discovered about the brain's capacity to create false memories and encode false beliefs? What are the "big lies" gaining traction in American culture todayand how can we keep them from taking hold?

My Lie is a wrenchingly honest, unexpectedly witty, and profoundly human story that proves the personal is indeed politicaland the political can become painfully personal.

This woman did not go to a therapist who dug up a false memory. Instead, due to working in the field as a reporter and writer she basically convinced herself she was part of the crowd she was steeped in. So I feel the presentation is a bit of a lie, or twisting the truth as she and she alone put these false memories in her mind.

Despite the main story which was very sad, diaturbing and very hard to follow, the fact about false memory ia very intresting. Our brain could be manipulated in a way we really remember something from the past which never happend! how crazy is that? How do we know if we are manipulated now or not!!

Aside from this book being very well written and narrated, it is one of the most important books in our current time. I hope more people will read it.

Now we need more of this.

This has to be on my top list. its about time some one rights about the harm they did and not what how bad there life was. what a great change from the old "the world owes me"