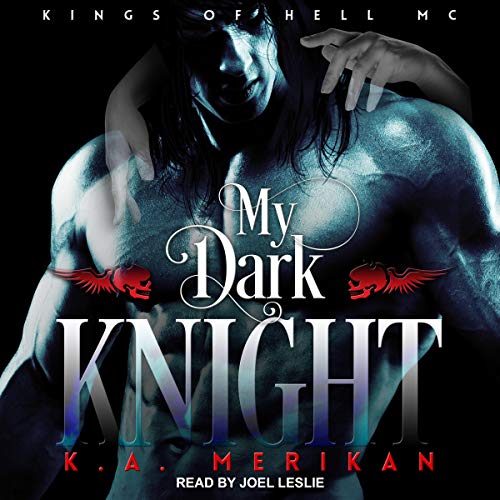 Newly single Knight is done with relationships. All he's interested in is bringing down the Count, an internet personality who is tarnishing his family name. An opportunity to crush him comes when the audacious clown shows up at the Kings of Hell MC clubhouse to film for his YouTube channel. But when Knight meets Elliot, the man behind the Count, he no longer knows what to do with him.

Knight has never seen a more pathetic creature than Elliot. He's also never met anyone who needed him more. Skinny, messed up, and a bucket of trouble as thick as tar, everything Elliot does seems to be a wordless death wish. No matter how much Knight hates Elliot's alter ego, under the makeup and theatrics hides a fragile young guy with a passion for history, and Knight can't help but catch Elliot every time he falls.

Elliot has bad taste in men. Always hopelessly attracted to violent brutes, his favorite is a long-dead serial killer. But he gets more than he's bargained for when he seizes an opportunity to meet the man of his dreams. The ghost is manipulative and dangerous, offering Elliot all he's always wanted, for a price he can't possibly pay.

What listeners say about My Dark Knight

give Elliott a break

I saw many reviews for this stating they couldn't finish it because they hated Elliott's character and stopped listening half way. This is a true error on their part because after that is when the book really gets good. Elliott was stuck in a cycle of abuse for most of his life, and I thought the author did a wonderful job of portraying the at times self sabotaging behavior someone who has trauma might exhibit. Also, if you loved the first book and are interested in reading the other ones in the series there are major plot points in this novel related to Beast, Laurant, and the other bikers and would not recommend skipping it.

This is one of my 5 stars read and listening to this in audio added a whole new dimension. Joel Leslie is undeniably one of the best narrator around! I have a feeling I might just re-listen to this instead of rereading in future.

My favorite in the series so far

The 1st thing I want to say is that I'm often intimidated by books that are over 8 hours long, But the attention that the authors pay to detail are worth every second. I thought I loved Beast and Larrant but I love Elliot and Knight even more. Most of the negative reviews you see will be about Elliott's character but I found him very endearing, annoying at times but still a good character. The chemistry between Elliot and Knight is very explosive and deliciously raunchy. The story was great and the intimate scenes were even better.

Another winner for me!!!!!! Elliot drove me crazy for awhile with his dedication to William Fane but he eventually showed his true colors to Elliot. It took Knight throughout the book to finally realize just how much Elliot meant to him but that didn't stop his from coming to Elliot's rescue time and time again.

I listened to this on audio and Joel Leslie was the narrator 👍 he adds to this AMAZING series!!!! Can't wait to download the next one and read/listen to Jakes story!

Once again, KA Merikan has made me love two characters I find rather unappealing! Can't wait for the next pair...

Why so many 5 star reviews?

I've been with Audible for 9 years and this is the first time that I've felt the need to write a review. We've all read/listened to books with characters that we couldn't warm up to or just couldn't stand. I liked Knight in the first book. He was a smart, interesting character that I wanted to learn more about and I thought he deserved his own story. He deserved much better than what he got.

Possible spoilers...
From the first meeting, I absolutely loathed Elliot. He was whiny, went out of his way to be rude, had NO redeeming qualities, and needs some serious help from a mental professional. He got smacked around several times after picking fights with the bikers then whined because no one liked him. He intentionally made bad decisions that caused himself and/or Knight to be hurt physically. One of the bikers even referred to Elliot as a parasite. He romanticized a serial killer, insisting the killer, William Fane, raped and tortured 30 young men because they all broke Fane's heart.... Even with hard evidence of Fane's cruelty, Elliot still believed his ghostly crush was just misunderstood. Elliot is the only character that I've ever hated so much that I wished him a horrible gruesome drawn out death.

I ended up only getting a little over half way through the book before I had all I could take. I can't believe that I made it that far. My friend managed to finish it and implied that Elliot got what he deserved from Fane. He could have been sent back in time to endure all of the torture and death that was meant for Laurent and that wouldn't be one tenth of what Elliot deserves.

As I said, I liked Knight but after all of the times he stood against everyone for that useless POS, it made me lose all respect for him. He should have been with Jake or even took his ex girlfriend back. Anyone but Elliot. By the time I stopped listening, I had begun to hate him and felt like he deserved all of the trouble Elliot caused him and that Beast should have given Knight the ultimatum of Elliot or the MC.

I'm going to return this book and wait for the reviews on the next in the series. If the next books are laden heavily with Elliot, I won't be wasting my credits. To all of the 2+ star reviews, I'm honestly confused. Were we listening to the same book? But hey, you like what you like and you keep doing you. To everyone thinking about trying this book, good luck.

Perfect way to enjoy again one of my fave books <3

I read this book 3 times already, but listening to it let me enjoy it again like it was the first time. Joel Leslie superb narration made this experience just amazing and perfect. Knight and Elliot are some of my fave characters, and giving them a voice for the first time was so good, each character was like I expected them to be, like I imagined them in my mind while reading the book. I finished listening to it in no time because I couldn't help but keep listening <3

K A Merikan and Joel Leslie at their absolute best

I am a big fan of dark, paranormal gay romance novels and this is as good as you'll get. It's unbelievable that's it's all together in one package now and so affordable. This is what got me hooked on audio books and so far, with my twisted, cynical, jaded, demented sense of taste, nothing matches up. I've listened to these several times. I can't recommend it highly enough.

I have to say this story combined with the amazing narration of Joel Leslie is masterful. The story is dark, sexy, has grey characters that don’t fall too far and are redeemable. Many people are annoyed with Elliott and how he’s obsessed with Fane but the author gives enough of a psychological reasonable explanation to satisfy me. The narrator is amazing. You know immediately who anyone is. The inflection and cadence of Joel’s voice in the given situations always fits perfectly. And the smut scenes are delicious to listen to. I listened to this story like 6 times already since my purchase. A real treat!

joel leslie voice is a gift from the heavens his voice pulling you into the story and giving such empathy to the reader for each character.....he is amazing