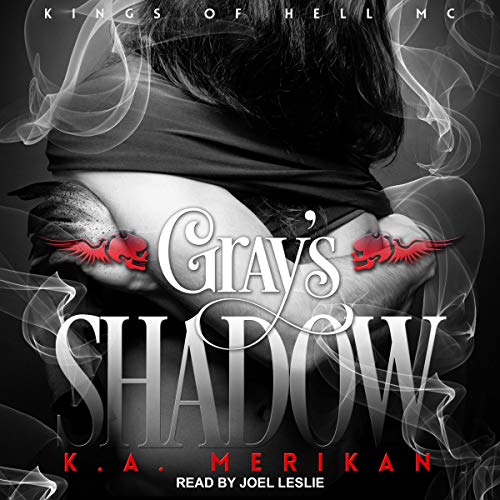 There can be no shadow without the man to cast it.

After losing his twin brother, Gray has devoted his life to the Kings of Hell MC. He will do anything to protect his family and that means anything.

Even sell his own shadow to the devil.

Following a fire that left him without one arm, Gray feels pushed to the sidelines. In order to prove to his club that he is still capable of completing dangerous tasks, he will have to team up with the strange creature from the Other Side. Tall, inhumanly strong, and menacing despite the handsome exterior, Shadow is just the tool Gray needs.

The moment Shadow lays his eyes on Gray, he wants to crawl under Gray's skin and make the human his.

Gray on the other hand isn't willing to get attached to a monster destined to do the devil's bidding and disappear once his time is up. Rejected, Shadow has to do everything in his power to convince his human that they belong together.

But as the clock ticks away precious minutes of Shadow's existence, Gray will have to choose between his loyalty to the Kings of Hell MC and responsibility for the creature he brought into this world.

What listeners say about Gray's Shadow

after reading all books I felt the punishment to grey was unjust, looking back at all the couples and the mistake they all made by keeping secrets and worshipping a serial killer ect grey did more than any one there and was treated harshly even though he and shadow got the egg.

First off Joel Leslie’s narration was on point and made the story come to life. There were parts of the story that I wished were explained more. I loved Shadow. I really felt for him on how Gray treated him. I’m not gonna lie, it made me tear up a little. Overall, I was very satisfied with the story. I think this might be my favorite in the series. In K.A. Merikan’s books, I really like how you don’t see where the story is going to go next. The story ideas are so original and dark and twisty and sexy and not angsty.

I Absolutely love Grey and Shadow

Greys Shadow is the 4th installment of Kings of Hell MC and it's just as good as the rest of the series. Shadow had my heart from his first appearance. He's just so sweet and innocent , even if he can RIP a person's head from its body. I've loved Grey since the beginning so it hurt how he treated shadow at first but it's understandable considering his personality. After Shadow broke through his barriers though he was completely smitten and so was I. I absolutely love this series and reccomend it to anyone who's into dark and sexy MM romance.

K A Merikan and Joel Leslie at their absolute best

I am a big fan of dark, paranormal gay romance novels and this is as good as you'll get. It's unbelievable that's it's all together in one package now and so affordable. This is what got me hooked on audio books and so far, with my twisted, cynical, jaded, demented sense of taste, nothing matches up. I've listened to these several times. I can't recommend it highly enough.

Reviews had me worried

I normally don't read reviews of trusted authors/series, I like going in totally blind. However I accidentally skimmed a few and was tempted to skip this book or put down the series. I am SOOOO glad I didn't. First of the Shadow's character is so unique and charming he alone was worth reading. Gray's attitude towards him at first may seem cruel, and a bit melodramatic but I think it was so incredibly real. He didn't understand Shadow and was (rightly) afraid of him and being influenced by those around him. While Shadow was desperate and confused it just makes sense! and I legit cried.... like several times. !!!!SPOILER!!!!! So many people complained about the clubs reaction to certain events at the end of the book, but come on y'all THIS IS AN OUTLAW MOTOR CYCLE CLUB WITH TIES TO A FREAKIN DEMON. You cross the club and you will be punished. Justified actions or otherwise. Frankly, -and here is my unpopular opinion- Shadow and Gray were let off EASY. Gray and Shadow's actions were selfish, and YES I believe that Gray made a few human decision. But he totally chose one person over the world as they know it. Which is why I love these Authors so much. They make mistakes, they act selfish and disregard the big picture sometimes because they are flawed. I can understand why people are upset, because I mean in the same situation could you imagine Beast not making the same choice as Gray if it were Laurent?

I don't usually write reviews, but this book left me so angry, I had to write something.

I want to say I liked the book. Gray is one of my favorite characters, so I was really excited for his story. And overall, I did enjoy it. Shadow was adorable, and I loved the relationship that slowly developed between him and Gray.

However, the further I got into the book, the more I started to dislike the other characters. And by the time I got to the end, I pretty much hated all of them. I am absolutely furious at Beast and the rest of the Club. Gray deserved so much more from them than what he got. He did so much for the Club and even sacrificed himself for Jake, but when it came time for them to do the same for him, all he got was a "It's complicated." And then to cut Shadow's finger off? To intentionally hurt the most gentle and innocent of all the characters in the series? That's when I started rooting for Baal to just wipe them all out.

I know that there's another book, but I just don't know if I can read it. I'm pretty sure I know what that egg was. And the fact that they decided getting it was more important than saving Shadow's life doesn't make me want to read more about it. It just makes me angry at the sheer selfishness of Laurent and Beast. I think I'm going to need to take a break from the series and try to come back later when I'm not so furious at the two main characters.

probably the weakest of the series, but still good

I will say this entry in the Kings of Hell MC series was not quite as enrapturing as the previous books (I had been really looking forward to Gray's story too) but it was still important to the story as a whole. And Shadow is just adorable. It does focus more on the emotional bond between the characters than the previous books, and it's not quite as sexy either, but in a way it was a nice change. I really cant wait to listen to the next one, hopefully it wont take them too long to release it!!!

Where does the authors get their fantastical imaginations from? The story is so absolutely well done its believable. The lines between reality and fantasy is so well woven I’m already saddened by the knowledge that this series is coming to an end.

Merikan’s series gets even stranger (in a good way) as Gray makes a pact with the creature of the house. His shadow must inhabit the body of someone long dead and ‘feed’ the trees for 3 consecutive moons. The imagination and character building in this story is fantastic. We see the quiet, introverted, almost reclusive yet lethal Gray’s innermost thoughts, feelings and fears change through the book with the introduction of his personified shadow. Loss of his arm mimics the pain of losing his twin several years previous. What I initially thought as creepy and unbelievable soon became a very unique and interesting twist on reality. Shadow’s personality, thoughts, feelings, depth of physical and emotional growth are stunningly presented. I’m not one for much angst, but in the beginning of the book he was quite a hand-wringer. He settled down, but those hormones and churning need to be one with his person again made the chemistry off the charts in a way you don’t normally see in creeptastic fiction. The story verges on being so intimate one could almost call it sappy, if not for the bold innocence of Shadow’s simple statements of love. By the end of the book, I was totally routing for Shadow and Gray, the world be damned- literally! Joel Leslie is awesome- puts just enough whine into Shadow’s lightly British accent when needed, but not so much as to make you want to go mad. The un-bodied version of Shadow’s voice is sufficiently chilling and shudder-worthy. Each of the club members has their own personality and voice, kept true through the series- something very few narrators do well, but Leslie exceeds all expectations!

I love how they’re love is! How Shadow even though he’s new and wants to be so sexually active, holds back, just for Gray! Cause he loves him so much!! And how Gray is so happy to have FINALLY found someone like Shadow who doesn’t want to hurt or scare Gray away! And tries so hard! It just makes my heart flutter!! One of my favorite Books!