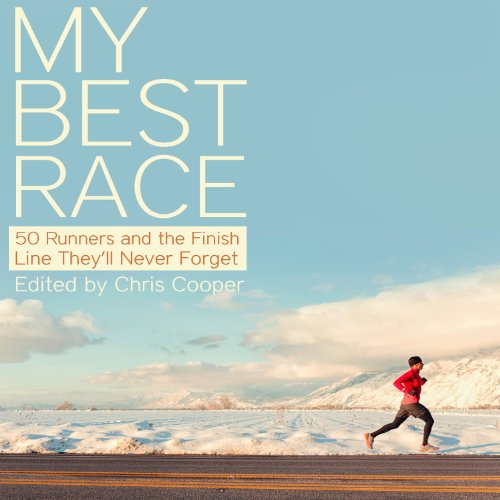 My Best Race: 50 Runners and the Finish Line They'll Never Forget
By: Chris Cooper
Narrated by: Jeffrey Kafer
Length: 6 hrs and 51 mins
Categories: Sport, Other
4 out of 5 stars 4.0 (5 ratings)

50 runners, from the world's elite to passionate amateurs, share the races they'll never forget. Every runner that enters a race has a unique reason for competing: racing for the challenge, for the achievement, for the health benefits, or for more personal reasons. But whether they are twenty-mile-a-day elite marathoners or twenty-mile-a-week recreational runners, each of them can invariably point to a singular performance as "the best race I ever ran."

My Best Race is a collection of those singular performances. In this inspirational collection, 50 runners, from Olympians and World Champions, to courageous disabled athletes and middle-of-the-packers, share their personal accounts of what they consider the best race they ever ran...and why.

Jeff Galloway: A top marathoner sacrifices his place on the Olympic marathon team by pacing his friend to the third and final qualifying spot at the Olympic Trials.

Trisha Meili: The woman once known only as "The Central Park Jogger" crosses the finish line in the race she founded to benefit disabled athletes, fourteen years after being left for dead from a brutal attack that gripped the nation.

Ed Eyestone: The unheralded runner comes out of nowhere to beat a previously undefeated state champion in a high school cross-country race, giving him the confidence to eventually become a four-time NCAA champion and two-time Olympian.

Kathrine Switzer: The woman they tried to physically remove from the male-only Boston Marathon in 1967 had no one but herself to blame forty-three years later as she struggled through the 2,500th anniversary of the original marathon in Greece.

Through interviews with the author, 50 runners recount their inspiring races and personal achievements with excitement, laughter, and sometimes tears.

This book was very inspiring and motivating. I enjoyed listening to the stories of overcoming injuries and self doubt.

Wasn't sure about this book but it was very inspirational and I learned a lot about being patient and enjoying races and running even on bad days. Mostly I take from it that you really NEVER have a bad run, it's what you take from it...thanks everyone for sharing your stories.