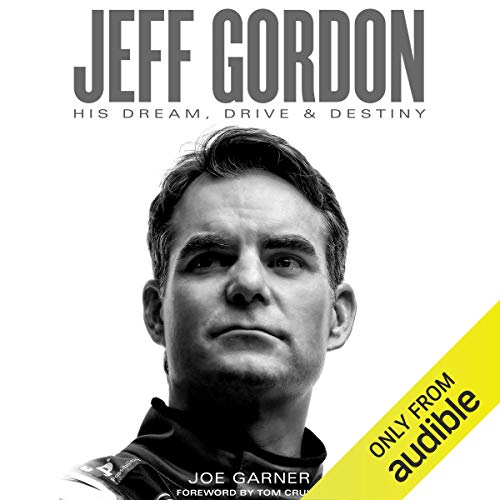 By: Joe Garner
Narrated by: Michael Butler Murray
Try for £0.00

"I purposely waited until I retired from driving so the book would encompass my entire career," says Jeff Gordon. "People are going to be able to read about me like they've never read about me before."

The first-ever authorized biography of Jeff Gordon, the four-time champion racing legend. For over a year, Garner interviewed and observed Gordon at races, at special events, and at home. The book is based on extensive interviews with Gordon as well as in-depth interviews with dozens of family members, friends, competitors, and colleagues, some of whom have never gone on the record before. Jeff speaks candidly, sometimes brutally so, about his childhood, his much publicized divorce, those he competed against, his family, and life after racing. Gordon's meteoric rise through racing's ranks is a classic American success story. Listeners will find inspiration in Gordon's candid take on his pivotal life episodes.

Five-time New York Times best-selling author Joe Garner has become one of the premiere chroniclers of America's popular culture. With his seminal work, We Interrupt This Broadcast, he took publishing by storm, selling nearly 700,000 copies and hitting the New York Times best-seller list in two consecutive years. He has produced several other best sellers. His most recent New York Times and USA Today best seller is 100 Yards of Glory, about the greatest moments in NFL history, with Bob Costas. Gordon and Garner first worked together in 2006 on the multimedia book Speed, Guts & Glory, about landmark moments in NASCAR history.

What listeners say about Jeff Gordon

There is no Z in NASCAR.

This is a good a book about Jeff Gordon’s career, but the narrator pronounces NASCAR as NAZCAR throughout the book, and it’s annoying.

this book has a lot of good info. The narrator does a good job and the book is not to long.

Struggled through it! Jeff Gordon deserved to have His story told much better than this... very disappointed!

The Narrator doesn’t know how to pronounce the name of the sport or other people’s names that are involved with the sport. Little frustrating.

Loved the book. Couldn't stop listening. I am a huge Jeff Gordon fan and this was well written and performed. Brought back many great memories of his career. Highly recommend for other real NASCAR fans.

The book was a great biography of Jeff, and it was fun to hear where he came from. The reader did a different voice for each person, which is fine when they’re reading fiction, but it’s really weird when they’re real people that you’ve heard speak many times and the impersonations are very inaccurate.

I am now a Gordon fan

I never really liked Gordon growing up watching him race since his 1st race as a child mainly because he won all the time and my driver, Rick Mast, who never won a cup race had my full attention. This book really made me a Gordon fan from all his off track work with kids and caring for other drivers off track as well. Great guy. I wish I knew all this growing up watching him so I could have been a Gordon fan but better late than never. Great book!

Great read for any racing fan

Great listen/read. Any race fan will love listening to Jeff's story of how he came up thru open wheel racing to Nascar.

Jeff Gordon is one of my favorite racers of all time. This book opened my eyes to knowing more about him and his struggles.

A definite must listen for fans of Jeff Gordon and/or Nascar. I loved the stories and history of Jeff's career but really got tired of the bad attempts at impersonating people's voices by the reader.