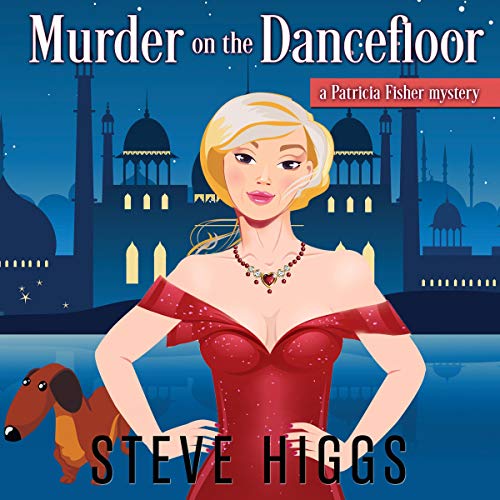 Murder on the Dance Floor

By: Steve Higgs
Narrated by: Helena Little
Try for £0.00

Now halfway through her globetrotting around-the-world trip, Patricia Fisher is feeling relaxed and happy on the arm of Captain Alistair Huntley. The peace is soon interrupted, though, when another calling card is found. They have been turning up for weeks, proof that someone has been breaking into the upper deck suites, but nothing has been stolen, and no crime appears to have been committed.

There’s more going on, though. The Aurelia is playing host to a live television event as India’s biggest ever show Stars That Dance come on board for the journey from Chennai to Mumbai.

There’s a real party atmosphere, until the first body is found. It’s one of the dancers, and there’s yet another calling card impaled on the knife through her chest. In a true whodunnit style, Patricia is going to have to solve the crime, catch the killer, and work out how the calling cards are connected.

It’s just another day on board the Aurelia.

What listeners say about Murder on the Dance Floor

Another brilliant Patricia Fisher mystery! The team face off with dancing film stars, a television sleuth and strange calling cards. Who could be behind the latest string of mysteries? Well rounded characters, never-ending twists and turns and a bit of glitz and glamour to boot! The narrator does a great job at bringing the cast to life!

This Patricia Fisher story was brilliant and the narrator is the best one ever for Patricia. She sounds like joanna lumley at times but I think all the audio Patricia Fisher books should be narrated by Helena Little. Honestly Steve Higgs this lady is perfect.
In this book an Indian TV dancing show is being recorded live on the Auralia. But the dancing couples are fighting amongst themselves and when one of the dancers is murdered Patricia decided to help solve the case. But a famous crime solving passenger thinks he's going to beat Patricia to catching the culprits but Patricia is having none of it. At the same time she's also looking into break ins in the cabins where nothing appears to be taken. Talk about alot to solve.

I loved this audio book. Great characters and brilliant storyline,
I highly recommend this book great series.
Narrator is good too.
❤️😍💖😻

Steve Higgs provides another story with plenty of twists and turns to keep your interest. Highly enjoyable listen. I recommend this author and all of his series!

I love to read stories and series by Mr. Steve Higgs. This series, Patricia Fisher Mysteries, is one of my favorites. I have read the book and now I have listened to it. This performance is spot-on with all the different character voices by the same actress, and topping it all is her wonderful performance of Patricia. If I could give more stars for the book and its performance, I would.

MYSTERIES AND DEATH CAN WALK HAND IN HAND

I received this audio book for free and am giving my honest and voluntary review.

Patricia Fisher, a woman on a trip around the world while having an affair with the ship’s captain ensconces herself with a mystery of break-ins where nothing is seemed to be stolen. Soon after a murder is committed, then another and finally an attempt on Patricia.

The thought processes of Patricia in finding the criminal is simple, yet still keeps the reader involved until the mystery or mysteries are solved.

The narrator did a wonderful job in being the voice of so many different people, although some of them seemed to bleed into each other.

A well-written story from a good author

Murder on the Dance Floor: Patricia Fisher Mysteries (A Humorous Cruise Ship Cozy Mystery Book 6), my ninth read/listen from author Steve Higgs and the sixth in this highly entertaining series. I'm going to have to go backward & catch up as I'm reading books out of order because it's what I have. Well-written & enjoyable. Helena Little’s narration adds to an enjoyable book's listening enjoyment. I look forward to reading more in this series & more from this author. I was given an Audible copy of this book & am voluntarily reviewing it. (RIP Marley January 20, 2014 - July 24, 2018).

This is the greatest series! Even though the books are fairly short each, they are worth every credit! These are so fun and addictive. I am coming to the end of the series in only 3 days, I've had no self-discipline on spreading them out to make the fun last for a few days. I also intend to move right into the follow-up series with this main character. Thank gosh I bought the annual package so I have enough credits available.

Narrator hasn't been the same throughout so far, but they are all similar enough that it feels cohesive.

Patricia investigates when the stars of an Indian ballroom dancing program are murdered onboard the Aurelia. Narrated by the lively Helena Miller, who not only brings Patricia to life, but effortlessly animates the novel over a five-hour span. Every Steve Higgs fan should add this to their collection.