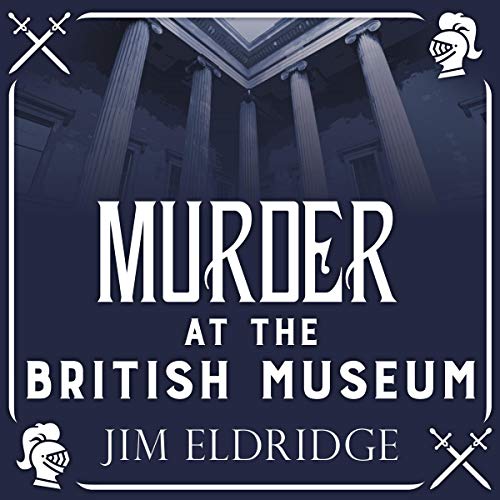 Murder at the British Museum

By: Jim Eldridge
Narrated by: Peter Wickham
Try for £0.00

1894. A well-respected academic is found dead in a gentlemen’s convenience cubicle at the British Museum, the stall locked from the inside. Professor Lance Pickering had been due to give a talk promoting the museum’s new 'Age of King Arthur' exhibition when he was stabbed repeatedly in the chest. Having forged a strong reputation working alongside the inimitable Inspector Abberline on the Jack the Ripper case, Daniel Wilson is called in to solve the mystery, and he brings his expertise and archaeologist Abigail Fenton with him.

What listeners say about Murder at the British Museum

Getting into his stride

With this second novel in his Daniel Wilson and Abigail Fenton series Jim Eldridge is clearly getting into his stride. The story hangs together and flows more smoothly than in his first novel, and he is getting to grips with his characters so that they seem more substantial. It's a good plot, which moves along quite quickly and the true villain isn't identified until a late stage in the story. The characters are meant to be somewhat larger than life and he plays around with some of the stereotypes, which adds to the fun. A good, easy listening story.

The narrator makes all of the female characters voices sound weak and frankly, quite creepy. Put me off as I couldn’t listen without inwardly cringing. Pretty poor all round ...

I had hoped that this, the second book in the series, would be more mature and believable than the first. Oh dear me no!
The two main characters are now living together, unmarried. This would have been perfectly scandalous at the time, but no one seems to bat an eyelid. There is no intimacy between, she is just as annoying, he as stupid.
Such a shame, as it was a pretty interesting premise for a series.
I am so sorry, but this is a badly written, over explained, naively drawn novel. And even though I only staggered through a tiny portion of the book, that will be an hour and a half of my life I will never get back.

Great combination of crime and romance

I loved this book and the first one before this. I love a series of a detective and that he is shown to have a proper human side. ... romance entwined. Brilliant cant wait for more of Daniel and Abigail's cases. And Peter Wickham is a brilliant narrator perfect all round.

Good performance for so many parts. Well written for a historical detective series that has interesting characters and enough twists and turns to keep you guessing till the end.

Daft faux Victorian crime story. Nothing taxing but enjoyable easy listening. Great. for falling asleep to or relaxing in the Sum to

Brilliant for lovers of the classic whodunit escapism at its best. Perfect for holiday reading.

another lovely story with plenty of atmosphere.

I have to admit I returned this title. I wanted the plot to be good but it was flat, the desire to make Abigail a stronger female character for her day seemed forced. Trying too hard almost. Strong female characters are great but constantly reminding the reader with stereotypes is dated. I kept on falling asleep instead of listening to this. Such a shame because the idea seemed so promising.

Shame the narrator had such trouble with female voices. Betty Boops with English accents. The voices created characters you couldn’t take seriously and demeaned a character’s intelligence every time they opened their mouths.

I was annoyed by the way the narrator voiced female characters. No dimension besides comically shrill.

I listened to this book on audible. Very enjoyable. Good story. Good characters. I didn't give it 5 stars because that would mean it was perfect. Nothing is perfect. I will be looking for more of the same in audible.