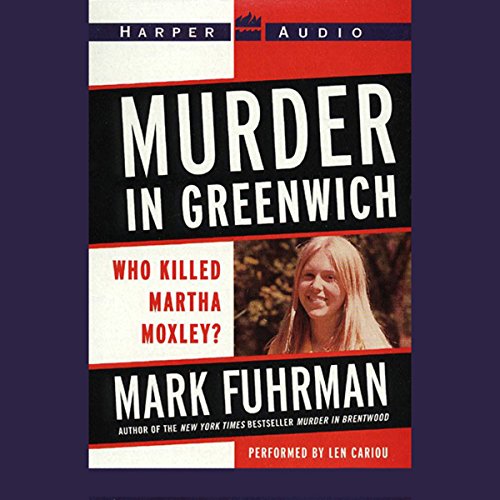 Retired L.A. police detective and witness in the O.J. Simpson trial Mark Fuhrman investigates the murder of 15-year-old Martha Moxley. Martha was bludgeoned and stabbed with a golf club on the grounds of her family's Greenwich, CT, estate on the night of October 30, 1975. The club belonged to the Skakel family, whose 2 sons, Thomas and Michael, had been with Martha the night she died. But this prominent family - Ethel Skakel Kennedy was the boys' aunt - refused to cooperate with the police and the murder has remained unsolved. Fuhrman's new book covers the case from its beginning and reveals explosive new information, including how local police mishandled information, how the murder weapon was found - and then lost, how wealth and influence interfered with the investigation, and how authorities tried to stop Fuhrman's investigation.
(P) and ©1998 HarperCollins Publishers Inc., All Rights Reserved, Harper Audio, A Division of HarperCollins Publishers

What listeners say about Murder In Greenwich

The Kennedy who didn't get away with murder

Michael Skakel predicted, "I can get away with murder; I'm a Kennedy". But he was convicted in 2002, a couple years after this book came out. Skakel, nephew of
RFK's wife Ethel Skakel Kennedy, was convicted of bludgeoning 15 year old Martha Moxley to death. Early suspicion fell on his brother Thomas, but the case went cold...
then "changed stories" by suspects and the involvement of Domenic Dunne and Fuhrman
(plus the William Kennedy Smith case) brought the mystery back into the public eye.

While this book ends before the conviction, Fuhrman makes a strong case for Skakel's guilt and a likely motive. Len Cariou's narration is good except for one error: I believe the last name of the family is pronounced "SKAY-kll", not "SKAH-kll". For those accusing Fuhrman of being on an ego trip, not so;
he does explain how he was brought into an examination of the case, though.

I've worked in the criminal justice system for 30 years and I know a good detective. Mark Fuhrman is a good one and got a raw deal. He is also a very good true crime author. This is a book I would recommend.

I would have given this 5 stars except the narrator mispronounced the last name Skakel. since the name is used throughout the book it was an annoying distraction. I think they should redo the audio and update our libraries. While that was a.big issue for me, the book moves along quickly; covering the sad murder of Martha Moxley with a detective's precision. Furhman is a good writer. Even though Detective Frank Garr was on the same track, it was this book that brought Michael Skakel to trial.

ONE OF MY FAVORITE STORIES

I love the book. if you have not read this book get it today. you will be up in to the late night reading.

How the rich get away with murder

One issue, the narrator mispronounce the Skakel family name, other than that, OMG, how is this guy free and not behind bars, Fuhrman may be a dog, but he pieces this together, step by step, using the local PD evidence and exposing their inexperience and mistakes to nail the murderer. Heads should roll, what an absolute miscarriage of justice, my heart goes out to that family.

Might be a good "read" but it's a snoozer to listen to!!! It should come with a warning... Do NOT operate heavy machinery while listening to this book!!!

It was obvious the performance would be spotty when the narrator mispronounced Skakel (consistently). How in the hell do they not correct that. The book was really just OK. I was familiar with the story, but I thought that this book was helpful by organized information and filling in a few blanks. It highlights that there are two America's, the ones the Skakel's live in and the one the rest of us live in.

Engaging and concise, Fuhrman logically, pragmatically details the how and why behind this initial miscarriage of justice.

Excellent , Mark Furman did it again!

This audio is highly recommended. I enjoyed it very much, and all of Mark Fuhrman's books.