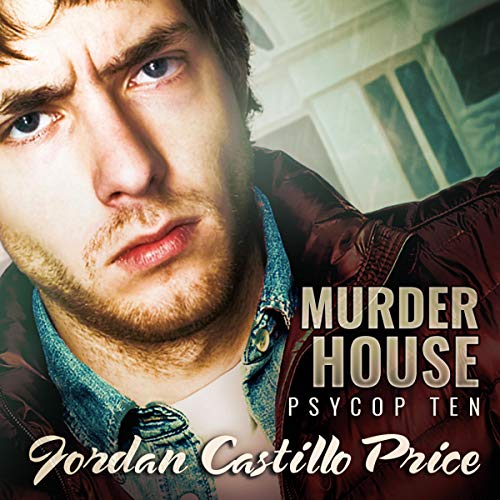 By: Jordan Castillo Price
Narrated by: Gomez Pugh
Try for £0.00

Victor Bayne has survived demons, ghosts, and repeaters. But can he survive a murder house?

Few people would willingly spend the night in a murder house, but Victor Bayne is up for the challenge. He’ll do whatever it takes to get a look at his permanent record, including going undercover in a townhouse where a recent death took place. Why not? There was no foul play involved, and as a psychic medium, he’d know if a ghost was creeping up on him. The whole “murder house” claim is just a product of a kid’s overactive imagination, and he’s confident he has the situation under control.

Until he gets a load of the smell.

Turns out, undercover work is a lot tougher than it looks. Vic misses Jacob something fierce. The subject of his assignment is a real piece of work. His partner has definitely got something to hide…and then the investigation takes a truly bizarre turn.

What happens if the murder house reveals itself to be more than just a schoolyard rumor?

PsyCop is an ongoing series filled with supernatural action and delightfully awkward humor - with a steady undercurrent of gay romance. It’s best listened to in order, so if you’re new to the series, start with PsyCop, Book 1, Among the Living...and prepare for a hauntingly good listen.

What listeners say about Murder House

A well written story with and interesting  concept.  The characters are likeable and the narration is very good.

Loved this. Even though Vic and Jacob are apart for most of the book, the story was absorbing and Vic is as compelling as ever. I liked getting to know Jack Bly and hearing Vic realise that perhaps he's not quite as screwed up as he thinks he is.

Gomez Pugh continues to be awesome. Could he possibly be getting even better? ;)

Excellent story and narration as always. I was hooked despite having read the book it still felt fresh and exciting listening to Gomez Pugh as Victor. Worth more than 5 stars.

So happy there's more to this series!

I didn’t do it consciously, but I am so, so, so glad I waited til this came out in audio. I had a total blast revisiting Vic’s world of crazy!

I also totally loved the interludes with Jacob- totally hot!

I am so grateful that Jordan is continuing to give us more from this series. It’s so captivating, and fresh and yet the characters are familiar and comforting because of our history with them.

It’s a win all the way around!

Add to it Gomez’ stellar narration and you have a 6 of 5 star audiobook!

Highly recommended – but it must be read as part of the amazing series!

Victor is an amazing character. He grows and gets wiser with every new book in the series and comes alive through the fabulous narration of Gomez Pugh.
Jacob is always appropriately sexy. A great read.

One of my favorite series of all times

I can’t believe this is book 10 in this wonderful series. I love the evolution of Vic and how much he has come into himself and his relationship with Jacob. As always the narration by Gomez Pugh is stellar and I enjoy listening to this series again and again.

With the title of “Murder House,” I pictured an isolated creepy gothic mansion. Instead, the story is set in a 3-year old townhouse in Boystown! In a change of pace, Vic goes undercover with his new partner (don’t worry, not *that* kind of partner), Jack Bly, one of my favorite supporting characters. We also get to see a new side of Carl, who can morph into a very take charge guy, and Veronica Lipton. But, don’t worry about Jacob; he is well represented in the book.
Gomez Pugh’s performance was, as always, brilliant as he brings the characters to life. His portrayal of the snarky, 80+ year old Sylvester Hale was spot on.
So, get set for almost nine wonderful hours of listening to Vic, Jacob, and assorted characters in Murder House. Oh, and did I mention the Mongolian hamsters?

I liked the focus on the ghost mystery this time around. Seeing Vic grow was intriguing. Another great narration by Gomez Pugh.

Another great one. I love theses stories and the narration. Looking forward to the next one in the series.

Vic undercover, yes it was great - and I love the side we see of these two missing each other, is Jacob amazing or what?

Anyone who hasn't done this series yet, please do it in audio! Gomez Pugh is simply incredible and truly becomes these characters. Highly recommend.

I love the psy cop series. Victor Bayne is such an interesting character. In this book, Murder house, Vic goes undercover, So the entire book is pretty much Vic's struggle to maintain his undercover character, having Agent Bly as his fake husband, while trying to solve the mystery of whether or not their assignment house is haunted or not, and if the cranky elderly gay neighbor is concealing information or abilities. At the same he is surprised at how Very Badly he misses Jacob while trying to be successful on his 1st undercover assignment.
While Jacob is constantly present on Victor's mind, he was actually absent for most os the book
While I missed Jacab being there, oh wow was the payboff in the last couple of chapters worth it. And again even after so many books in this series it hasn't lost its originality or momentum. While the actual undercover assignment story line is secondary To victors on going internal dialog, it doesn't diminish the story.
I loved getting to know Bly, found him to be a very likable side character. I hope we see more of him.
As usual Gomez Pugh is an amazing narrator.

It’s the every little things I miss about you

Let me tell you guys, it was a torture to wait for this audio to come out. 😅 I received the ARC of this ebook when it first came out and I was soooooooo very tempted to read it because I was dying to know the next adventure of Vic and Jacob. 😁 But I know myself and I definitely prefer “PsyCop“ series on audio because let’s face it, the combo of Jordan Castillo Price and Gomez Pugh means guaranteed “eargasms”! 😋🔥 And man, because I had the ebook in my hands, waiting for audio was like I’m on a diet and I know there’s a delicious chocolate lava cake in the fridge and I’m like, I can’t eat it unless I run 5 miles today. Lol 🤣 However, it was well-worth the wait because JCP has done it again! 👏

So Vic and Jacob are both stubbornly determined to find out about Vic’s permanent record. And both men don’t want the other to dig around because it’s a guaranteed disaster in the end. Vic is especially worried about Jacob unnecessarily being a martyr in finding out the truth about his past and losing everything in the end. Because digging up Vic’s permanent record means Jacob will lose his job, his dignity and respect from his colleagues. And Vic is worried that their relationship might not survive if that happens. So when he got a chance at having higher security clearance by being a FPMP undercover spy, Vic dived in at the very first chance he got. So he’ll do small undercover job for a day, get the higher security clearance and Jacob will still have his job. So it’s a win-win situation and everybody’s happy. Right? 😁 But turns out, it’s not a day-long undercover job! 😅 He’s supposed to be undercover for possibly months before he can find out the truth about his assignment. And bonus point? The house he’ll be living is notoriously known as the “murder house”! 😱

I didn’t really understand the difference between MM Romance and Gay Fiction when I discovered these LGBT books a few years ago. And now I have the vivid understanding of the difference between two, I will have to say that “PsyCop” series is between Gay Fiction and MM romance. And I saw some people complaining about the lack of Jacob’s presence in this book but I get it, Vic is undercover and there’s no way he can contact or talk to Jacob even though he was dying to. Although Jacob isn’t in this book physically that much, he was always with Vic’s thoughts. ❤️ And I believe the beginning and the end scenes more than made up for Jacob’s lack of physical presence in this book. 🥰 This book isn’t that creepy or scary comparing where with the previous books in the series but this is the book we could see Vic truly coming out of his shell. He’s awkward with people and usually very shy and reserved but he’s now trying things out of his comfort zone. It’s difficult for him to be away from Jacob, who’s the anchor of his life, that long who’s the anchor of his life but he did it anyway, just to save the man he loves more than anything in this world. And I’m very happy that he got Agent Bly as a friend from this undercover assignment. All in all, another great addition to a great series. And I loved the epilogue soooooo much! 🥰 Sooooo aww-worthy! 😍 And needless to say, Gomez Pugh did a magnificent job narrating this series. 👏 The next book in series can’t come soon enough! 😌💜