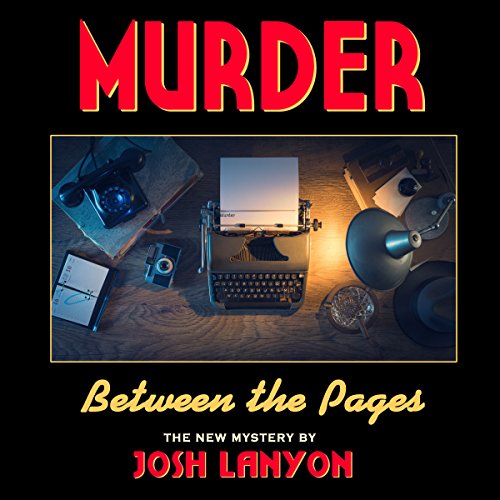 Murder Between the Pages

By: Josh Lanyon
Narrated by: Kale Williams
Try for £0.00

Felix Day, author of the Constantine Sphinx mysteries, and Leonard Fuller, author of the Inspector Fez mysteries, are bitter rivals and the best of enemies. Both happen to present when a notorious author of roman à clef is shot by an invisible assailant during a signing at historic Marlborough Bookstore.

Even if they weren't both suspects, it's the perfect opportunity to match wits and sleuthing skills.

If only the murderer was equally amused.

What listeners say about Murder Between the Pages

The concept is interesting and reasonable well written. The characters are likeable and the narration is good though there is little definition between the main characters voices.

I was entertained by this Josh Lanyon story but i didn't love it. The story arc was very formulaic and just when the romance aspect started to get going, the story was over. I wasn't convinced by the romance either. The narration was very good.

A witty and charming mystery

Murder Between the Pages is one my favorites! It's a fun mystery set in Post WWII. I'm a fan of the "locked-room" mysteries and this definitely has that vibe. I enjoyed the verbal sparring between Fuller and Day, then seeing them move from enemies to lovers. Kale Williams did a great job narrating, as always...did I detect a bit of Jimmy Stewart there?! :) 5 Stars for a fun read/listen!

I love Josh Lanyon. This book is a cute 40s-style whodunit. The language it's written in is full of era-appropriate mystery-story camp. It's a really fun story; but to me, what made the story even better was Kale Williams's narration. His storytelling is perfect for a black-and-white mystery about a crime writer (like the ones in this book) or a trenchcoated, fedora'd PI.

Audiobook Review November 2019:
I'm sad to say that this Josh Lanyon gem slipped by my re-read radar but then when I decided to do some audiobook "re-reads" this year it showed up on the recommends for you listing it seemed like fate😉. Murder Between the Pages was even better the second time around.

As for Felix and Leonard, well I have always loved films such as Charlie Chan, Mr. Moto, and Mr. Wong so their Constantine Sphinx and Inspector Fez mysteries banter was incredibly entertaining for me. It added a level of nostalgia that was much appreciated and showed the respect the author has for history.

Kale Williams once again brings life to the characters. Were the voices as I heard them in my head when I originally read Murder three years ago? Not necessarily but they were fitting and I loved it. As I've said before in some reviews, I've been a fan and collector of old radio shows out of the 30s, 40s, & 50s since I was 10 years old and I don't know if its the setting, the mystery, the characters, or all of it together but Kale Williams' narration reminded me very much of the radio shows such as Screen Directors Playhouse, Lux Radio Theater, and Suspense. This element also brought a moment or two of nostalgia that only heightened the whole storytelling experience.

Original ebook Review November 2016:
Another great Josh Lanyon murder mystery! I don't know if there are any plans for future Day/Fuller mysteries or if it's just a standalone but either way, what a wonderful addition to my historical romantic suspense shelf. Murder Between the Pages is a perfect blend of history, romance, mystery, and humor that is very reminiscent of film noir of the 1940s. Ethan Day and Leonard Fuller may not appear to like each other but they have more than one common interest and when a murder happens right before their eyes, lets just say those common interests become very interesting and extremely entertaining. The duo may not be up to Holmes & Moriarity or Adrien & Jake caliber but Day & Fuller are still fun and their connection is definitely intriguing. As for the mystery, well I've been watching and reading mysteries of all kinds ever since I was old enough to sit up so very few actually stump me anymore. Personally, a mystery is not just about the who and why but also about the journey getting from the deed to the discovery and trust me, the journey in Murder is awesome.

What made the experience of listening to Murder Between the Pages the most enjoyable?

As much as I love Josh Lanyon, and think that her books are the gold standard of m/m romance, especially her historical books. I am sad to say this one fell a little flat.The 1940's ambiance was present, but the characters felt a little one dimensional.And maybe because this was a shorter story, there wasn't the character background and development that we see from Lanyon's longer stories.I did enjoy it, but its not my favorite of hers.

What other book might you compare Murder Between the Pages to and why?

Snowball in Hell, the "Doyle and Spain #1" which I loved, and so wish had a sequel, and also her Holmes and Moriarity series.

Who would you have cast as narrator instead of Kale Williams?

Anyone. Although he had a nice well modulated voice it was very confusing because the 2 main characters sounded exactly alike. And I was very confused, not realizing until the 3 or 4th chapter, that the POV switched back and forth. I never was able to discern differences in Fuller and Day, marking them with their own personalities. For me the narrator did a poor job of making each a separate persona.
The plot was interesting, and the MC's had great potential. And I am still and always a Lanyon fan. I wish I had read it, instead of listened to this one.

Another great mystery/romance by Josh Lanyon. It is also historical, as it is based right after WWII and includes the great colloquiums of that time. This is an enemies to lovers trope, heavy on the mystery (murder within a locked room) with a secondary budding romance and the quintessential JL HFN ending. The narrator does a good job and I have enjoyed his work with other books. However, there was very little distinction between the MCs voices. So since there were alternating POVs, it was sometimes difficult to determine who was speaking if you missed the name at the beginning of the chapter. Overall, an enjoyable listen.

A cosy story of the post-war English author/detective variety. It's hard to judge the book itself, though I generally love Lanyon's work. The trouble is that each chapter is told from the perspective of one of two protagonists and because the narrator doesn't differentiate between them in voice, I was constantly confused about which one was speaking. Most of the other characters sounded like Jimmy Stewart, which was also confusing. I listened over 2 days but had to replay the last chapter and I'm still not sure who was who.