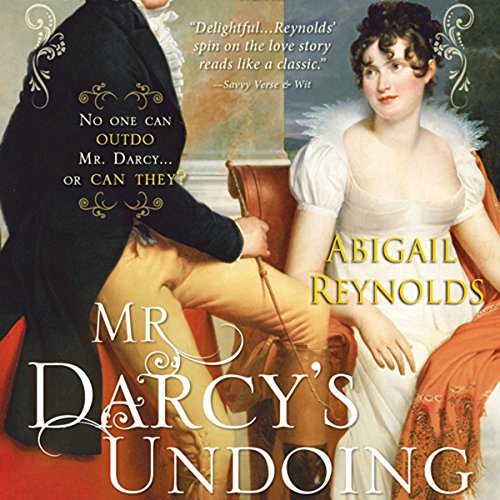 By: Abigail Reynolds
Narrated by: Vanessa Johansson
Try for £0.00

What could possibly make a proper gentleman come completely undone?

What if Elizabeth Bennet accepted the proposal of another before she met Mr. Darcy again? In Abigail Reynolds' bold and playful retelling of the Austen classic, a devastated Mr. Darcy must decide how far he is willing to go to win the woman he loves. Consumed by jealousy, he knows that winning her will throw them both into scandal and disgrace, but losing her is unbearable. Mr. Darcy is going to have to fight for his love, and his life. . .

Quite a good storyline but spoiled for me by very poor pronunciation by the narrator which will probably make me not buy another audiobook narrated by her.

If they were reading Reynolds for the first time. As a first experience of a P&P variation by A.R. , it might make an interesting read ... Here, however, the authoress repeats scenes and episodes used in other similar works.

Would you be willing to try another book from Abigail Reynolds? Why or why not?

I have read four of Ms Reynolds's remakes to date. She writes quite well, but having listened to four of her books, I find she tends to repeat some narrative "modules" and that the same scenes occur across books.

What does Vanessa Johansson bring to the story that you wouldn’t experience if you had only read the book?

She reads well, better than the interpreters of the other three books by the same authoress. She brings the characters alive and makes dialogue quite easy to follow.

Could you see Mr. Darcy's Undoing being made into a movie or a TV series? Who would the stars be?

If one of this authoress's books were to become a series, I think "Mr Fitzwilliam Darcy" might be the best choice for its originality... However, if this book were to be made into a film, I think the leads might be played by any one of the recent Austen-novel heroes: Penry-Jones, Cowan, Northam, Lee-Millar ... Elizabeth by any of the recent P&P/ Austen series actresses like Ruth Wilson, Jemima Rooper...

Not in keeping with the true characters

This is a shame for the author who I normally enjoy but this is an exception.

The characters are not in keeping with their normal characters and stretch the line for a version of P&P when basing it on the two main characters while keeping true to them. They behave outside the normal for the time and are more in line with Wickham and Lydia apart from not eloping.

A disappointment and I wish I had read the book and not bought the audio book.

I loved it all I was unable to put it down, however it is maybe better to listen to it alone or through headphones🤗😀

What disappointed you about Mr. Darcy's Undoing?

The last maybe quarter of the book. It was so dragged out and the characters began to break apart and they all stopped behaving characteristically. Seems to be done to try to milk some last bit of pointless and uninteresting rule-defying out before the book concluded. It should have concluded much earlier...

I thought it was all a bit silly by then.

What aspect of Vanessa Johansson’s performance would you have changed?

Nothing. She's a *great* reader.

The first half of the book truly interested me and I was hooked on it. The characters were quite like themselves in that portion of the book and the story was very romantic and intriguing. The writing was also top notch.

Great Pride and Prejudice what if

What made the experience of listening to Mr. Darcy's Undoing the most enjoyable?

I just love this story and have read it before in the past, and wanted to be able to listen to it while working and driving.

Abigail Reynolds is one of my favorite authors and I love her Pride and Prejudice variations. This one had more sex than some, but I loved the addition of Mr. Covington as a rival for Mr. Darcy's affection. Also, there is one particular scene where Mr. Darcy believes his love for Elizabeth is hopeless and he decides to go to Vienna for a few months. Before he leaves he says a private goodbye to Elizabeth, which ends up completely changing everything.

A different person to read. The reader had a very poor English accent that was very distracting, and she had a tendency to pronounce places and names incorrectly at times. Also, beware that this is not exactly an unabridged version. I have read the book at least twice and found myself missing scenes, so I picked up my copy of the book and read along for a while and noticed that scenes and paragraphs were summarized or skipped all together. This didn't happen all the time, but I noticed it on occasion.

Overall I enjoyed this book, and I hope that the rest of Abigail Reynolds books are converted to audio because I'd listen to them all.

This is more erotica then anything. It was laking a climax and it could have been really good

A bit of a let down

I was hoping Lizzie would be more rational and more empowered. Frankly, not much new here besides the sex scenes.

not much plot after the first 8 chapters or so. won't listen to it again.

Read it before. Just love it. It is very well written. Highly recommend it. Explicit and frank but I enjoy that.

If you could sum up Mr. Darcy's Undoing in three words, what would they be?

Mr Darcy and Elizabeth Bennet I love the LOVE story