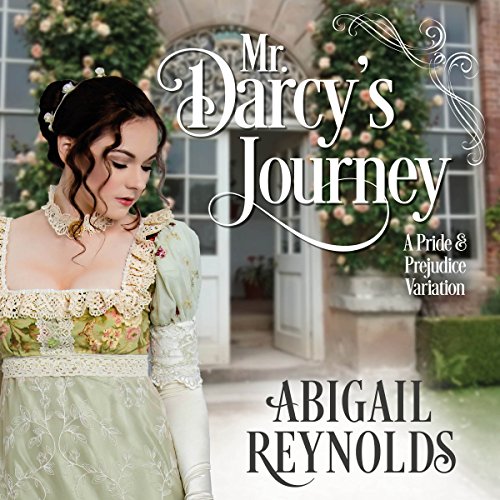 By: Abigail Reynolds
Narrated by: Elizabeth Klett
Try for £0.00

Mr. Darcy is at his wits' end. Elizabeth Bennet, the woman he can't live without, overhears him insulting her family. Now she won't even listen to his apologies. Then his old friend Sir Anthony Duxbury tells him two of their friends are in terrible danger. If Darcy wants to help them, they have to leave for Yorkshire immediately.

But something doesn't add up. Elizabeth claims to know Sir Anthony, too - but by a different name. What game is his old friend playing? And is it dangerous?

Even Sir Anthony says the trip is dangerous. The Luddite rebels are on the verge of armed revolt - and he should know, because he's one of them. Darcy's cousin Lady Frederica decides she's going with them anyway, and insists on bringing Elizabeth. Could this be Darcy's chance to earn Elizabeth's forgiveness and her love?

Elizabeth would rather face a squad of Napoleon's soldiers than spend three days trapped in a carriage with Darcy and his headstrong cousin, but she has her own reason for agreeing to come. If she can just manage to keep her temper, she may be able to rescue her uncle from financial ruin.

But when a Luddite riot erupts around them, it's Darcy and Elizabeth who need rescuing - from each other.

A very different but enjoyable variation

...and an interesting look at what was happening in England outside the drawing rooms of JA's novels. At times, some of the characters come across as a bit 2-dimensional and I found the behaviour of Lady Matlock (and to a lesser extent, her daughter), officious and slightly creepy, as she acts as puppet-master to everyone around her, especially Elizabeth.

Poor Elizabeth is manipulated from the very start of the titular journey and she never regains her own agency against Lady M. Early in the story, Darcy mentally compares Lady Catherine's demands to Lady Matlock's almost imperceptible manouvering. Darcy's thoughts are affectionate, but there's a lot of truth in the comparison: they both expect their own way.

Even when Darcy is being his most insulting, he still respects Elizabeth, even though she (understandably) can't see it. As she learns more about him, I can't help feeling that his honesty and lack of manipulation must be a welcome relief!I

Despite my issues with some elements of the story, I did enjoy it and EK's narration was good, although not great. I don't think I'd listen all the way through again, but I may skip sections and listen to Darcy and Elizabeth's part of the story.

For those that worry about such things, this is a clean variation, which doesn't go beyond passionate kissing.

i thoroughly enjoyed this variation of Pride and Prejudice, though I get the sense I might have missed the first part of this. Abigail Reynolds has added in diverse characters, especially strong women and more fair-minded men, historical events and a lot of action. Ms. Bennett and Mr. Darcy are put through significant challenges before their coming together becomes the natural and expected conclusion. Elizabeth Klett has provided a well matches, stellar performance of this historical romance. Overall, very enjoyable.

too fictional for my taste

although I enjoyed the book. And the author explains the historical facts at the end and explains the credibility of most part of the story and some of the characters, I did not enjoy that those facts "made" Elizabeth Bennett and Mr Darcy to be involved in several compromises which I believe are totally out of character for both of them and therefore ruined the book for me. Don't get me wrong, I loved the compromises but for the time of the story I don't believe them as easy to dismiss as they were. I read another variation that involved a light compromise between the two of them and both of them acted as they should, and it seemed more realistic than this one.
Also, I didn't like that lady Matlock was so flippant about compromising miss Elizabeth.
overall, the story was entertaining enough but not one of my favorite variations

If you love the Darcy's you'll enjoy this!

This is another great variation to the Elizabeth & Darcy story. It weaves in enough of the original story to keep the spirit of JA’s book part of this story, however, the mix of circumstances develops into a new story. The story seems to get into more detail about the political situation at the time, how it affected friends and family and how Darcy and Elizabeth managed through it. Elizabeth Klett is the narrator and does an excellent job. She helps make the story engaging with her ability to distinguish each character with a unique voice. I can easily recommend this audiobook. I also must say that I received this title for free in exchange for an unbiased review.

What did you love best about Mr. Darcy's Journey?

I love the historic period, the look into the lives, beliefs, customs and thoughts of the people living in the time period.

We all know the basics of P&P, what I love is the details into everyday lives, seeing the characters we love as real people dealing with real life situations.

I enjoyed both Darcy and Elizabeth.

we learned Darcy is so much more than the strict noble. The way he treated the people who work for him was remarkable. He comes off as prideful and set in his ways, but as a lord , e was good to his subjects.

I liked discovering more about the everyday Darcy, the person with responsibilities, a young sister to protect, a manor to manage etc. Seeing how he deals with each situation that requires his attention speaks for his character.

Elizabeth was also a revelation. We see she did develop an attachment to Wikham. She, with her sense, was blinded by his sweet talk and lies. It showed us a more human and relatable Elizabeth.


I loved the book and Elizabeth's narration from beginning to end.

She used the perfect tone to narrate each character, their different modes. She conveyed their characters with her tone of voice and added to an already beautiful story.

can't get enough of Mr. Darcy

if it has to do with Jane Austen or Mr. Darcy I am sure to listen! I can't get enough of this! I really enjoyed it! narration was perfect and I can't wait to listen again and again. This audiobook was given by the author, narrator, or publisher at no cost in exchange for an unbiased review via Audiobook Boom.

Darcy and Elizabeth in a Revolution

I truly loved this book and listened non stop until I finished. It was an engaging story. Many of the same elements of the Jane Austen classic Pride and Prejudice were present, but changed up to fit the plot. There are also some new and entertaining characters from the classic The story builds from discontent on the part of a gentleman regarding the rights of man and the plight of workers in mills. It results in Revolution skirmishes in England started by the down trodden. Elizabeth and Darcy are right in the middle of it along with his cousins, Aunt and Uncle. There is a little heat between Elizabeth and Darcy, but does not go over board. I will probably listen to this again.

Abigail Reynolds does it again!

I am a huge fan of Reynolds' P&P variations and this one is no exception. It's well done and Elizabeth Klett is a perfect narrator for it. I was swept away on an audio journey and transported back into one of my favorite places to be - right there beside Mr Darcy and Elizabeth Bennet.

This is a good listen. I enjoyed both the author's work and the narrator. Great side characters as well. I wish Ms Reynolds would tackle Persuasion, do a story from Bingley's POV, etc... Write more! :)

Lady Matlock gets to be the heroine

If you like Lady Matlock you'll love this book. If you enjoy historical novels you'll love the way some significant historical events are woven into this story. One of Abigail Reynolds' best.

Good narration couldn't save this

I found out about this Pride and Prejudice subgenre by listening to audio-books provided by AudioBook Boom. I was gifted this one in exchange for an honest review. I thought I could learn to like this quirky little subgenre since my favorite book is Jane Austen's Pride and Prejudice. This book is not my gateway to that journey. It started out really well, got a little silly, then a bit boring and very political and ended up a mushy mess. Perhaps I am not suited for this grouping after all, but I do plan to give it at least one more chance. As noted in my headline, the narration was good. Very good, indeed!