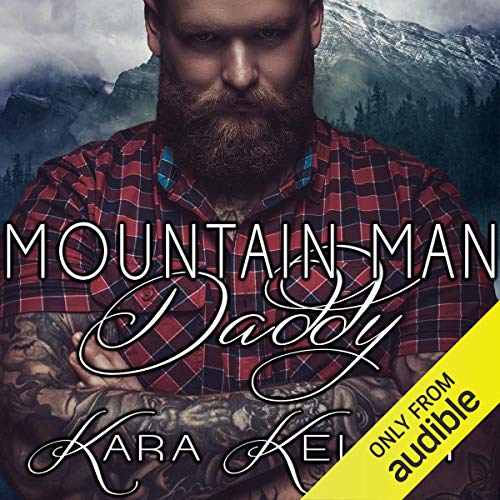 By: Kara Kelley
Narrated by: Tor Thom,Charley Ongel
Try for £0.00

Since retiring from his job as an officer with the Royal Canadian Mounted Police, Mike Hunter has been living off-grid in a cabin nestled in the mountains of New Brunswick, but his solitary existence is interrupted when he pulls a beautiful young woman from her vehicle after a crash she is lucky to have survived. Mike's conscience overrides his desire for privacy, and he brings the injured woman back to his cabin to care for her.

Avery Trent is desperate to get away from the ruthless men seeking to collect on her murdered husband's gambling debt, and the last thing she wants is to stay put in some mountain man's cabin until he decides it's safe for her to leave. But Mike gives her no choice in the matter, and when she makes a run for it, Avery quickly ends up over his knee for a sound spanking.

In spite of her situation, Avery cannot help feeling safe and cared for when Mike gently comforts her after her punishment, and when he takes her in his arms, his dominant lovemaking is better than she could have ever imagined. Mike does not hesitate to assume the role of Avery's firm but loving daddy, and he is fully prepared to discipline her as thoroughly as necessary to curb her reckless defiance, but will he be able to keep her safe from both her enemies and his own?

Twists and Thrills in this Throbbing read

Where does Mountain Man Daddy rank among all the audiobooks you’ve listened to so far?

First book I've listened to, will get more!

What other book might you compare Mountain Man Daddy to, and why?

What does Tor Thom and Charley Ongel bring to the story that you wouldn’t experience if you had only read the book?

They brought the story to life.

yes, but didn't have the time. couldn't wait to continue listening.

I loved this audible book, will look for more from this author.

freaking loved this. But seriously do not even try to listen to it where people are around. The story mixed with the narrator's hot growly voice was the perfect icing on the cake. makes me want to drop everything and find me a hot mountain man to call daddy and live in the woods forever.

Mountain man daddy is full of action, love and swoon. Two people with different pasts who come together on a Canadian mountain. Hotness in Daddy Mike and sassy mixed with sweetness in his little Avery. Great story with 5 stars for the narrators.

I received this audiobook free for an honest review. As the details of the book are stated in Goodreads "Mountain Man Daddy includes spankings, sexual scenes, and elements of age play. If such material offends you, please don't buy this book." It didn't offend me really. It just didn't excite me for her to be "Little Girl" and him to be "Daddy". Plus, I'm really not into spanking. But, if you like those kinds of things, this is your book. The story was cute with the strong Mountain Man and the demure, helpless young woman. However, Avery did come through in the end showing her strength. Of course, the narrators, two of the best in the industry, did an excellent job of portraying the characters as I think the author intended.

Be warned! Do not listen to this in a crowd. Unless you're into that kind of thing... I don't judge.

Seriously, the combo of the narrator's smooth smokey voice combined with the HAF storyline was so amazeballs. I honestly can't think of anything else to say about it. You need to buy this audiobook ASAP and prepare yourself for a tingly ride.

This audio was a fantastic sexy listen. More then just a Daddy Dom/baby girl spanking story. Which was hot as hell and a turn on in every way. It was a story of two people running from two different things, who end up, running into each other, finding themselves, and love.
This audio was full of emotion, mystery, suspense, humor, romance, danger, spankings, and even a pet bear. A little of everything which all good audiobooks should have.
The duel narration was spot on. The chemistry was electric. Nobody does a growling, alpha, mountain man like Tor Thom. His deep baritone was the perfect choice to put me in the headspace to sink into the story completely. Charley Ongel makes Avery believable while showing weakness and strength in her character. If you love Romance / Mystery with domestic discipline/Daddy Dom’s this is the audio for you.

Wow. Where to begin? Tor Thom's voice as Mountain Man Daddy is sinfully and decadently delicious. OMG. Listen to this one alone. Make sure you have a fan. This southern belle was more than hot and bothered. Bravo, Kara, Charley, and Tor! Where I can I find a Mountain Man like that in Georgia?

This one has everything you would want in a story. Adventure, sex, suspense and love. Tor Thom and Charley Ongel hit this one out of the park! Their voices were perfect! Loved it !

Man on the mountain

Sexy story. The narrative was done very well. Charley Ongel and Tor Thom, have the perfect voices for this book.
Must admit I was a little turned off when “Daddy” spanks her for being afraid the men that are after her killed the owner of the Jeep she ‘borrowed’. Little to heavy handed for me. But that’s what they call love! Hey who am I to say any different?
Enjoyed Charley and Tor! Can’t wait for more

I really loved this audio! The story was super steamy but also had a good plot with suspense, mystery, and a few twists. Dual narration was fantastic! I love Tor Thom's growly voice as Mountain Man Daddy! <3

Grizzly Adams and the Princess

I think the story was very well written. Great descriptions that really made me feel a part of it! Add in Thor and Charley narration you have nothing but eargasms!!!