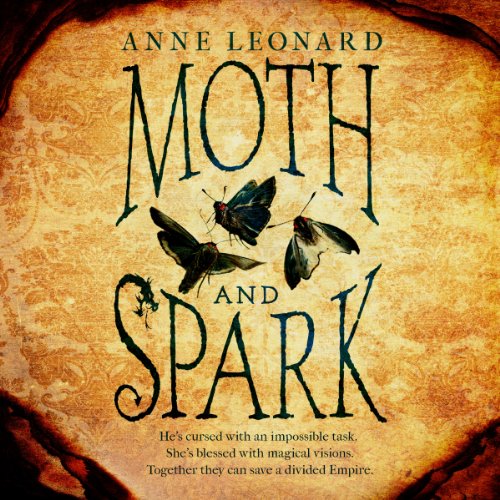 By: Anne Leonard
Narrated by: Christian Coulson
Try for £0.00

A thrilling quest, forbidden love, and an Empire on the brink. Moth and Spark is The Princess Bride meets Game of Thrones...with a dash of Jane Austen.

He's cursed with an impossible task. She's blessed with magical visions. Together they can save a divided Empire. Prince Corin has been given the task of freeing the dragons from their bondage to the Empire. However, it seems that not even the dragonriders themselves know how these terrifying beasts are kept under control.

When Tam, a doctor's daughter, arrives in the capital she makes an amazing discovery: She is a Seer, gifted with visions. Sparks fly when Corin and Tam meet...but it's not all happily ever after. Not only is the prince forbidden to marry a commoner, but war is coming to Caithen. Torn between love and duty, they must work together to uncover the secret that threatens to destroy their country.

What listeners say about Moth and Spark