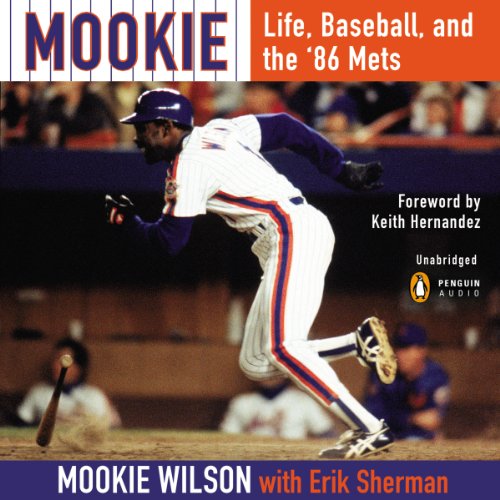 They said it was the "Curse of the Bambino". They said "the bad guys won". Now one of baseball’s all-time good guys, New York Mets legend Mookie Wilson, tells his side of the story - from the ground ball through Bill Buckner’s legs that capped the miraculous 1986 World Series Game Six rally against the Boston Red Sox to the rise and fall of a team that boasted such outsize personalities as Darryl Strawberry, Keith Hernandez, Dwight Gooden, Gary Carter, Lenny Dykstra, and Davey Johnson.

Growing up in rural South Carolina in the 1960s, Mookie took to heart the lessons of his father, a diligent sharecropper who believed in the abiding power of faith - and taught his son the game that would change his life.

When Mookie landed in Shea Stadium in 1980, the Mets were a perennial cellar-dweller overshadowed by the crosstown Yankees. But inspired by Mookie’s legendary hustle, they would soon become the toast of New York. And even when their off-field antics - made famous by a contingency of the team called "the Scum Bunch" - eclipsed their on-field successes, Mookie stayed above the fray.

In 1986, the Mets were a juggernaut, winning 108 games during the regular season and edging the Houston Astros for the National League pennant following a grueling 16-inning Game Six classic. In the World Series against Boston, in an epic at-bat that led to the Buckner error, Mookie would ignite a fire under the Mets, helping to force a Game Seven. New York would win to become World Champions.

In an era when role models in sports were hard to come by, some tarnished by their own hubris and greed, Mookie Wilson remained the exception: a man of humility and honor when it mattered the most.

“Mookie Wilson is one of the most beloved figures in more than a half-century of Mets’ baseball. Now he has established himself as one of the foremost chroniclers of a baseball life. Mookie’s relentlessly honest portrayal of his career and the unforgettable 1986 World Series Champions further elevates his status as a Mets icon.” (Gary Cohen, New York Mets broadcaster, SportsNet New York)

"Mookie Wilson is a legendary Met - both on the field and off. Here, in rich detail and color, is what it's like to be a New York baseball icon. A wonderful book." (Jeff Pearlman, New York Times best-selling author of The Bad Guys Won!)

"We all tend to think of William Hayward Wilson not just as 'Mookie,' but as 'good old Mookie' for his effervescent persona and demeanor. In fact, Mookie is really, really good, and not nearly old, but this thoughtful, compelling book will show you a side of this all time Mets favorite that might surprise you. His candor and honesty will undoubtedly deepen your respect and admiration for a man who is about so much more than a ground ball to first base." (Howie Rose, New York Mets broadcaster)

What listeners say about Mookie

For Mookie fans only

Being a huge fan of Mookie, I loved the parts about his early life and enjoyed his recounting much of the 1986 season and post season. What I didn't like as well was his complaining about how he was treated by the Mets. Not that I disagree with him. I think the Mets management treated him really shabbily, But it sounded too much like whining to me. I still don't know why the management tore apart the fabulous 1986 Mets team, and apparently Mookie doesn't either. That team could have been a dynasty if they had just left it as it was. I could have done without the last chapter, wherein Mookie describes his Christian beliefs and becoming a Minister at his church. But that is just my personal opinion. I would have preferred to hear only about Mookie the baseball player.

If you’ve listened to books by the authors before, how does this one compare?

Which character – as performed by Ruffin Prentiss – was your favorite?

Do you think Mookie needs a follow-up book? Why or why not?

No, I believe he's told his story

Ruffin Prentiss did a creditable job reading the book. He did mispronounce a few names, in particular Hal Lanier (the manager of the Houston Astros) had the pronunciation of his name butchered at every mention of it.

only thing that would have made this better is if Mookie would have narrated it. This is a great behind the scenes of his life and the 86 Mets.

Any true Mets fan should make this a must read/listen.
Love you Mookie!!!!

Great story that includes very intelligent and insightful commentary about baseball, both the sport and the business. Mookie Wilson provides one of the most sincere looks at the Mets organization that I have heard out of all the books that have been authored about it. His story is inspiring, and I felt deeply both his discontent and the peace in who he has become.

The narrator, Ruffin Prentiss, did a fantastic job. I look forward to hearing him in other titles.

Would you listen to Mookie again? Why?

Yeah. He had a very positive message and attitude.

Mookie himself, of course.

The 1986 World Series and also his experience as a truck driver.

Not really. It took me several settings.

Mookie Wilson was the heart and the soul of the Mets. He came up to the big leagues when the team was horrible. He perservered through tough times. I was so glad for him that he was able to win the World Series with the team. Let's Go Mets!